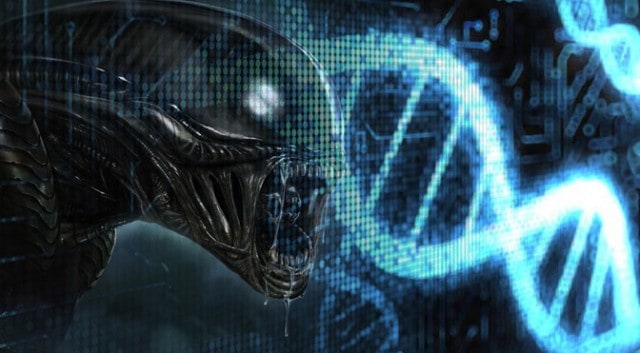 Scientists have succeeded in creating the first organism with “alien” DNA. In normal DNA, which can be found within the genes of every organism , the twin strands of the double helix are bonded together with four bases, known as T, G, A, and C. In this new organism, the researchers added two new bases, X and Y, creating a new form of DNA that (as far as we know) has never occurred after billions of years of evolution on Earth or elsewhere in the universe. Remarkably, the semi-synthetic alien organism continued to reproduce normally, preserving the new alien DNA during reproduction. In the future, this breakthrough should allow for the creation of highly customized organisms — bacteria, animals, humans — that behave in weird and wonderful ways that mundane four-base DNA would never allow.

This landmark study, 15 years in the making, was carried out by scientists at the Scripps Research Institute and published in Nature today [doi:10.1038/nature13314 – “A semi-synthetic organism with an expanded genetic alphabet”]. In normal DNA, two separate strands are entwined in a double helix. These strands are connected together via four different bases, adenine (A), thymine (T), cytosine (C), and guanine (G). A always bonds with T, and C always bonds with G, creating a fairly simple “language” of base pairs — ATCGAAATGCC, etc. Combine a few dozen base pairs together in a long strand of DNA and you then have a gene, which tells the organism how to produce a certain protein. If you know the sequence of letters down one strand of the helix, you always know what other letter is. This “complementarity” is the fundamental reason why a DNA helix can be split down the middle, and then have the other half perfectly recreated. There, I just explained in about 150 words two of the most vital processes to all life that we know of.

In this new study, the Scripps scientists found a method of inserting a new base pair into the DNA of an e. coli bacterium. These two new bases are represented by the letters X and Y, but the actual chemicals are the rather cryptic “d5SICS” and “dNaM.” A previous in vitro (test tube) study had shown that these two chemicals were compatible with the enzymes that split and copy DNA. “We didn’t even think back then that we could move into an organism with this base pair,” said Denis Malyshev, first author of the paper. Fortunately, he was wrong.

The full Nature write-up is worth reading if you want the nitty-gritty details, but here’s the short version. First, the scientists genetically engineered an e. coli bacterium to allow the new chemicals (d5SICS and dNaM) through the cell membrane. Then they inserted a DNA plasmid (a small loop of DNA) that contained a single XY base pair into the bacterium. As long as the new chemicals were available, the bacterium continued to reproduce normally, copying and passing on the new DNA, alien plasmid and all. In the study, this process seems to have carried on flawlessly for almost a week.

For now, the XY base pair does nothing; it just sits there in the DNA, waiting to be copied. In this form, it could be used as biological data storage — which, as we’ve covered previously, could result in hundreds of terabytes of data being stored in a single gram of synthetic, alien DNA. Floyd Romesberg, who led the research, has much grander plans. “If you read a book that was written with four letters, you’re not going to be able to tell many interesting stories,” Romesberg says. “If you’re given more letters, you can invent new words, you can find new ways to use those words and you can probably tell more interesting stories.”

Now his target is to find a way of getting the alien DNA to actually do something, such as producing amino acids (and thus proteins) that aren’t found in nature. If Romesberg and co. can crack that nut, then it will suddenly become possible to engineer cells that produce proteins that target cancer cells, or special amino acids that help with fluorescent microscopy, or new drugs/gene therapies that do weird and wonderful things. (Read: What is transhumanism, or, what does it mean to be human?)

Ultimately it may even be possible to create a wholly synthetic organism with DNA that contains dozens (or hundreds) of different base pairs that can produce an almost infinitely complex library of amino acids and proteins. At that point, we’d basically be rewriting some four billion years of evolution. The organisms and creatures that would arise would be unrecognizable, and be capable of… well, just about anything that a white-coat wearing maniac can dream up.