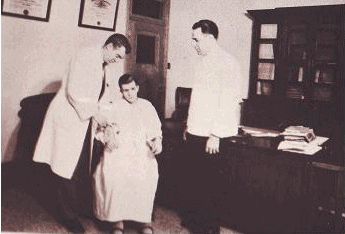 Mengele, 38, on the left. Ann Diamond was given this photo from a yearbook published in 1949  by Hopital Saint Michel Archange in Quebec City.

Henry Makow | February 9, 2016
There are enough consistent accounts of Illuminati trauma based brainwashing to conclude they are true.  Our “leaders” are not only corrupt, they are depraved.
If they can do this to children, I am not sanguine about what they have planned for the rest of us. They let a Nazi monster, Josef Mengele, continue torture experiments on Americans. Are they applying MK-Ultra techniques to society as a whole?  9-11 = Mass trauma brainwashing?
Mengele’s portable holocaust is another indication that a satanic cult, the Illuminati controlled both sides in World War Two.The Illuminati rule by creating false dialectics such as we have today with Putin.
Josef Mengele (from Ann Diamond)
Mengele came to Argentina courtesy of the Vatican “rat line” in 1947 after the Americans allowed him to escape after they captured him in Germany in 1945. Allen Dulles, who was Catholic, may have helped sponsor him.
The Mengele biographies were both written by CIA hacks — who were allowed access to the classified files at headquarters.
At one point the CIA said it had over a million pages on him, including his diaries and autobiography, all classified. A fraction of these pages were released in 2004. So many people knew he had worked for the CIA, that the agency even had a disclaimer on its website denying this.
One of the forensic scientists (a Dr. Levine) who identified Mengele’s remains and DNA in Embu, Brazil, after he supposedly drowned there in 1979, also testified to the Warren Commission — i.e. he likely worked for the CIA —
Witnesses at the time of Mengele’s death reported that the man in the coffin was not Mengele.
Mengele traveled back to Germany in the 1950s to visit family. He is said to have flown PanAmerican all over North America.
There are literally dozens of Mengele sightings on record from around North America from the 1950s and 60s — they are extremely consistent and detailed in their descriptions of torture and trauma-based mind control.
(from Jan 31, 2010)
by “Sara in Minnesota”
(for henrymakow.com)
According to Freedom of Information Act documents, Nazi sadist Josef Mengele  came to the U.S. as part of the CIA’s Operation Paperclip,  which enlisted Nazi and war criminals in the Cold War.


The Nazis used the occult techniques to commit the most horrible crimes against children to create the perfect soldier, the perfect spy, and the perfect assassin, persons who with a key word or phrase could be made to do the bidding of their handlers unquestioningly and not remember it later nor be able to disclose classified information even if they wanted to. The program was called Project Monarch or MK-Ultra.

They were also interested in remote viewing, divination, and the military applications of a multitude of extrasensory abilities including “red fire” or psychic killing. See Carol Rutz’ book “A Nation Betrayed.” 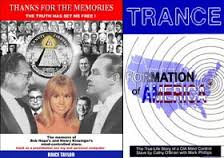 (Thanks for the Memories, and Tranceformation of America by other Illuminati sex slaves)
Programmed messengers and programmed sex slaves were also created for the demented pleasures of the rich and famous.
Known as MK-ULTRA, the program abducted super bright children and naturally occurring high order multiples—especially identicals—from their natural parents and put them with persons who would allow abuse and experimentation. The program is still ongoing and now uses and manipulates the Child Protection system to facilitate these activities.
PERSONAL EXPERIENCE
As best I can ascertain, I was born in 1959, one of 5 identical girls. It appears I was not from one of the ancient bloodlines. We were a natural occurrence. Of my sisters, only one besides me has an unusual IQ.My mother was given a false psychiatric diagnosis by the Mayo Clinic so that we could be confiscated and placed in separate homes. I was placed with a vile very exceedingly violent child pornographer, JMP. I was born in the US but spent the better part of my first 3 or 4 years globe hopping with Mengele. English was not my first language. 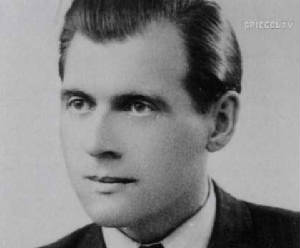 Mengele et al tortured me many times in many locations I have heard mentioned by other MKULTRA survivors including several hospitals here in the US and on military bases. The tortures included but were not limited to rapes, disjointing, killing animals and other children in front of me or being forced to watch as adults were tortured, electric shock, injections with LSD and anectidine and many other substances, cattle prod up the vagina or rectum, witnessed murders, occult rituals, many bizarre sex acts. It was very calculated and continues to the present. As these people are government-sanctioned in their actions, there is no safety I have found except in the Lord.Mengele was alive and well and living in the US as an honored guest of the United States government as late as 1987.
I have testified about these abuses before Congress twice and am willing to do so again. They are now abusing my children and grandchildren and using ever newer and more arcane technologies. IT MUST BE STOPPED!!!!

TRAUMA-BASED BRAINWASHING Much of my memory of that is sketchy at best. I am still being abused face to face and programmed, as are my children. One of the things I remember is that absolute obedience was required. This was programmed in many ways, the most effective one being credible threats to kill loved ones and pets.

My MK-ULTRA dad threw my baby brother in the incinerator in front of me in broad daylight in Flint, Michigan, after holding my mother captive for months to conceal her pregnancy and forcing her to deliver at home.

Another home born child, a sister had her head bashed against the wall at birth by JMP in Hapeville Ga. Another very vivid incident I remember at about age 4 was when my dad threw my 16-year-old aunt to the ground and stomped on her with his cowboy boots in front of me, my other aunt, and my grandparents. She almost died and had to have a kidney and her spleen removed to stop the internal bleeding. The family story of how this occurred is that she fell off a 3ft wall at the site and sustained all that injury.

That incident threw me into therapy. As a teen I stopped to admire a pair of cowboy boots in a store window and suddenly found myself on the ground screaming at the top of my lungs, abreacting, in a full blown flashback, but with only bits and pieces of memory of the incident. 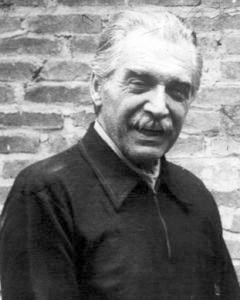 (Mengele in old age)
My cult dad or MK–ULTRA dad, JMP, and Mengele et al used stress positions. We children were deprived of food and water for weeks at a time. Then we were confined in tiny cages or made to stand or to stand on one leg and so forth for days at a time, round the clock.If you moved even to blink, you were beaten or my mom was tortured in front of me. We had to hold our breaths for long periods during these sessions and were beaten strangled or suffocated if we breathed without permission, always reminded that our captors held absolute power of life and death over us .We kids were unusually limber from tortures that sometimes involved disjointing. Often we were left in positions that amounted to contortions.

I don’t remember the assassin programming very well but I do remember a child being sacrificed at a very early age with my hand tiny held over the knife. This seems to be a standard scenario among survivors.You had to ask permission to go to the bathroom and were forced to eat it if you couldn’t hold it for days at a time, or other people were punished if you had an accident.

Everything a normal child or adult would take for granted, we had to ask for permission. Meals were torture. Baths were either boiling hot or freezing cold and caused terrible pain to bruised abraded genitals. All toys had to be left in the closet for months at a time and were completely off limits unless we had guests.

Other times my mother bargained for me to have my toys, but she’d get beaten if they weren’t put away when he got home. He’d say “Look what you made me do.” We were forced to memorize our bloodlines in the cult and many many other things under credible threats of death or maiming.

The photographic memory was reinforced with flashcards. As soon as I could speak a little English, Mengele taught my dad to use hypnosis on me. Language lessons were reinforced with beatings and my alters are fluent in several languages I do not speak. Some of my alters do not speak English. This has made therapy almost impossible to pursue.

At about age four, my training in how to assemble a rifle began. At about age six, I remember being pretty accurate at targets with some weapons and practicing with a knife.

The assassin/Project Artichoke  programming is dependent on inculcating an uncontrollable rage in the victim/person they desire to make into a programmed assassin. Once you break the back of that rage, you’re much more difficult to control. Sleep deprivation was used as were a lot of drugs.

Sexual abuse was continuous and sadistic. I was a “presidential model” and still am a Million Dollar Baby, one who is sold to the rich and famous, especially politicians to meet their emotional and sexual needs, while being amnesiac to all events involving these persons.

Because I was and am unwilling to be used in this capacity, I seem to have been an excellent pawn in several blackmailing schemes. Although my memories are much less clear than Cathy O’Brien’s, I seem to have had the same perpetrators.

When I was used in child porn, they used to perm and bleach my dark hair to platinum blond and style it in ringlets like Shirley Temple. They also put hard contacts in my dark eyes to make them look blue. I’m told these were not available at the time outside of the intelligence community. I was taken to the White House right before JFK was assassinated and offered to JFK sexually. He declined. It is my belief that he knew he was already in danger and that he intended to stop the Nazi Illuminati behind MK-ULTRA. There’s probably more I can say, but I’m too tired to write anymore.