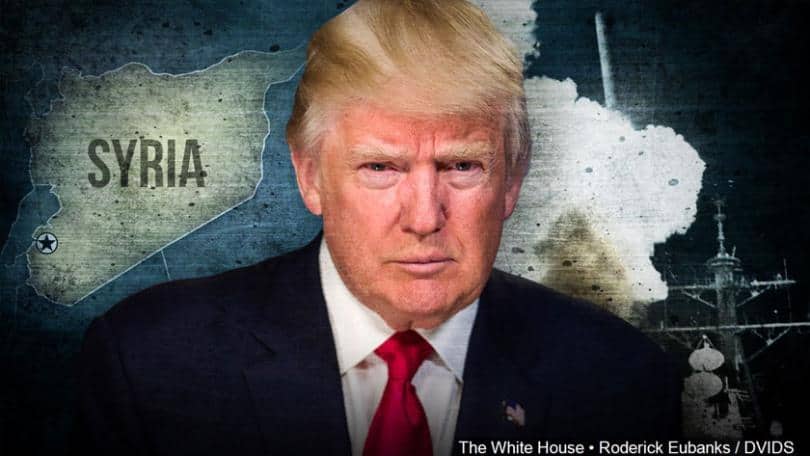 While Democrats and Republicans are acting out their ongoing left-right charade for the distraction of the American people, the real agenda of the gamemakers in charge of both parties in Washington, D.C., progresses without notice. That agenda, of course, is WAR.

Perpetual war is what drives both America’s economic and political interests. And Donald Trump has already proven himself to be a fully controlled toady of the military-industrial complex by carrying out two military attacks on Syria (not to mention ongoing missile attacks, drone attacks, bombings, etc., all over the Middle East), both of which were clearly predicated on phony false flag chemical attacks blamed on the Syrian government but were actually launched by U.S./Israel/Saudi Arabia/Great Britain-backed terrorists, such as ISIS, al-Nusra, White Helmets, etc. Well, the signs are ubiquitous that more false flag chemical attacks are on the way.

Many foreign news sources have investigated and reported on the phony evidence justifying America’s constant use of military force, but the American people are never told any of this by our own national media, as it is nothing more than a propagandist mouthpiece for the Washington War Machine. Right now, the foreign media is abuzz with the signs of another false flag chemical attack on the horizon, giving Donald Trump the “justification” in launching new attacks against Syria.

For example, according to this recent report:

In a move that was entirely predictable, the US administration is once again threatening to bomb Syria if there is a “chemical weapons attack.”

This was entirely predictable because that chemical attack script has been read out, with salty crocodile tears, fake concern, and mocked indignation by US talking heads over the years – since 2012, in fact, when former US President Obama himself drew his red line on Syria.

The latest script-reader to toe the chemical hoax line is President Trump’s national security adviser, John Bolton, who on August 22, stated: “…if the Syrian regime uses chemical weapons we will respond very strongly and they really ought to think about this a long time.”

Beyond the tattered veil of moral superiority that is US war propaganda, Bolton’s words were clearly a very public command to Al-Qaeda and co-extremists to stage yet another fake chemical attack.

Bolton’s statement was preceded by an August 21 France-UK-US (FUKUS) joint statement, likewise threatening further illegal bombing of Syria if a chemical attack in Syria occurred (based on evidence the US never has nor needs to reveal).

Recall that the last time they acted on such a threat, in April 2018, the US and its interventionist allies didn’t even wait for the Douma lie to be exposed, let alone for any mythical evidence to materialize, before they illegally bombed Syria with 103 missiles. The bombings occurred before the Organisation for the Prohibition of Chemical Weapons (OPCW) had a chance to visit the Douma sites in question.

It seems that FUKUS’ appetite for destroying Syria wasn’t satiated in April 2018, nor in the April 2017 bombings of Syria following unsubstantiated allegations around Khan Sheikhoun, Idlib.

Chemical weapons accusations are among the most overused war propaganda tactics during the war on Syria. From late 2012 to April 2018, NATO’s mouthpieces have screamed bloody chlorine or sarin. But time and again, they’ve been revealed as intellectually-challenged, supremely-unoriginal liars, to put it politely. Less shrill voices have pointed out the many occasions where so-called “rebels” had access to sarin, control over a chlorine factory, and motives for an attack to occur, among other prudent points.

In other words, Bolton just encouraged al-Qaeda terrorists to stage a chemical attack so that, once again, Trump will be “forced” to react militarily to please leftists and neo-cons despite the fact that cognizant Americans would prefer to stay out of the whole affair. If that statement isn’t a statement of pretext, an incentivization to stage a chemical weapons attack and blame in [sic] on the government of Syria, I don’t know what is.

The build-up to yet more strikes against the legitimate and secular government of Bashar al-Assad aside, however, US support for terrorists in Syria and ISIS specifically has been well-documented.

Call them modern-day pirates, privateers, proxies, or anything else, they are undoubtedly working for and with Western countries to achieve the dismantling and destruction of states standing in opposition to the Western financier system.

Case in point, the surprise ISIS attacks in Suweida which saw over 140 people killed, 170 injured and dozens of women and children kidnapped.

One need only to look at the map created by Terrametrics in order to see that the United States territory in Eastern Syria is a safe haven for ISIS. Looking at the map, the orange area is the area that was attacked by ISIS and the red is territory held by the Syrian government. The blue area, however, is that held by the United States/”rebels.” It is under official protection of the US military and a US military base is stationed there.

In other words, ISIS is not only allowed to exist but it is able to launch vile attacks on civilians in areas directly adjacent to those under protection of the United States. Indeed, terrorists stationed in the American occupied territory move in and out at will. This fact has led many to question whether or not the terrorists are using the American area as a forward operating base or at least a haven they can retreat to after committing their attacks.

“There is indisputable evidence that the United States pretends it is waging irreconcilable struggle against international terrorism in front of the international community, while in reality it provides cover for the combat-ready Islamic State groups to let them regain strength, regroup themselves and advance US interests in the Middle East.”

Washington directly aids ISIS and other terrorist fighters, deploying them where Pentagon commanders want them used, relocating them to new conflict zones in Syria and other countries.

And anyone who thinks that President Donald Trump is ignorant of all of this duplicity and inhumanity or is some kind of Lone Ranger trying to fight against all of this duplicity and inhumanity has either completely lost their faculties or has been totally Manchurianized by the Trump propagandist organizations QAnon and FOX News. Donald Trump is just as controlled by the Deep State as were Bush and Obama. Wake up, people!

In addition, many sources, including Blackstone Intelligence, are reporting that right now both the U.S. and Russian navies are massing in great strength in the Mediterranean Sea in advance of what most everyone believes will be another false flag attack by U.S.-backed terrorists in Syria, followed by a massive U.S. air assault against Assad’s government. And it looks like Russia has decided it will not sit idly by and let the warmongers in Washington, D.C., London, Tel Aviv and Riyadh do to Bashar al-Assad what they did to Saddam Hussein and Muammar Gaddafi.

It does appear that until America begins to get a taste of its own medicine and the horrors of war are experienced in our own homeland (which will happen at some point: nations reap what they sow just like individuals), the American people will continue to dissociate themselves from the death and destruction their government is inflicting around the globe and will continue to disavow any responsibility for the sorrow and suffering their apathy and callousness produce in countries all over the world.

Obviously, that’s not going to happen any time soon, is it?

Some 100 evangelical pastors had a private meeting with President Trump this past Monday, and now they are more energized than ever to support Trump’s war agenda. You watch: When Trump attacks Syria (and maybe Iran), these same evangelical preachers will be beating the war drums louder than ever. No amount of uncovered criminality or immorality committed by Donald Trump will dissuade evangelicals from their rabid, robotic support for his Zionist war agenda.

As I have said repeatedly: There are not two parties in Washington, D.C. There is only one party: The War Party. Republican or Democrat, Barack Obama or Donald Trump: It doesn’t matter. Perpetual war for the bankers, war merchants and State of Israel marches on.

P.S. I have just compiled a series of my DVD messages on the truth about Israel in one giant discounted package. It’s called The Israel Package. This package includes 7 DVDs containing 15 messages, including:

*“The Children Of Promise”

*I Will Curse Them That Bless Thee

I urge readers to take advantage of this limited-time offer and order The Israel Package: 7 DVDs containing 15 messages on the truth about Israel for only $30.