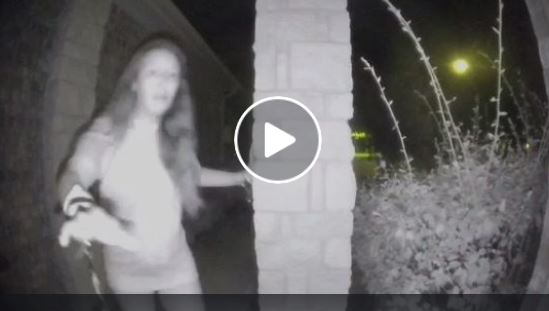 Police say they have found the woman and she is safely “out of state with family.“

Call me a skeptic, but things don’t add up:

If her “boyfriend” is dead (“suicide” – how surprising) – hence the danger is gone – why is her identity being kept secret “as a domestic violence victim”?

What was this supposed boyfriend’s NAME?

Who ARE these people?

I do not believe she is safe.

Continue to pray for this woman!

Police in Texas are searching for a mystery woman who rang the doorbell of a Texas home in the dead of night, partially dressed and wearing what appeared to be broken restraints on both wrists.

The woman was captured on the surveillance camera of the house she rang in the Sunrise Ranch area of Montgomery, Texas, the Sheriff’s Office said.

In the video, the woman can be seen emerging from behind a bush next to the house, barefoot and wearing only a T-shirt and unknown items dangling from both of her wrists.

The woman walks to the front of the house and rings the doorbell. The video ends there.

A resident who lives in the area but does not wish to be identified told ABC News that the woman had rung the doorbell of several different neighbors, but by the time they answered their doors, she had disappeared.

“I’ve got a 9-year-old daughter at home. It worries me what’s going on in the neighborhood,” another neighbor, Branson Golson, told Houston ABC station KTRK.

The Montgomery County Sheriff’s Office is calling on anyone with information about the woman to contact them at 936-760-5800.