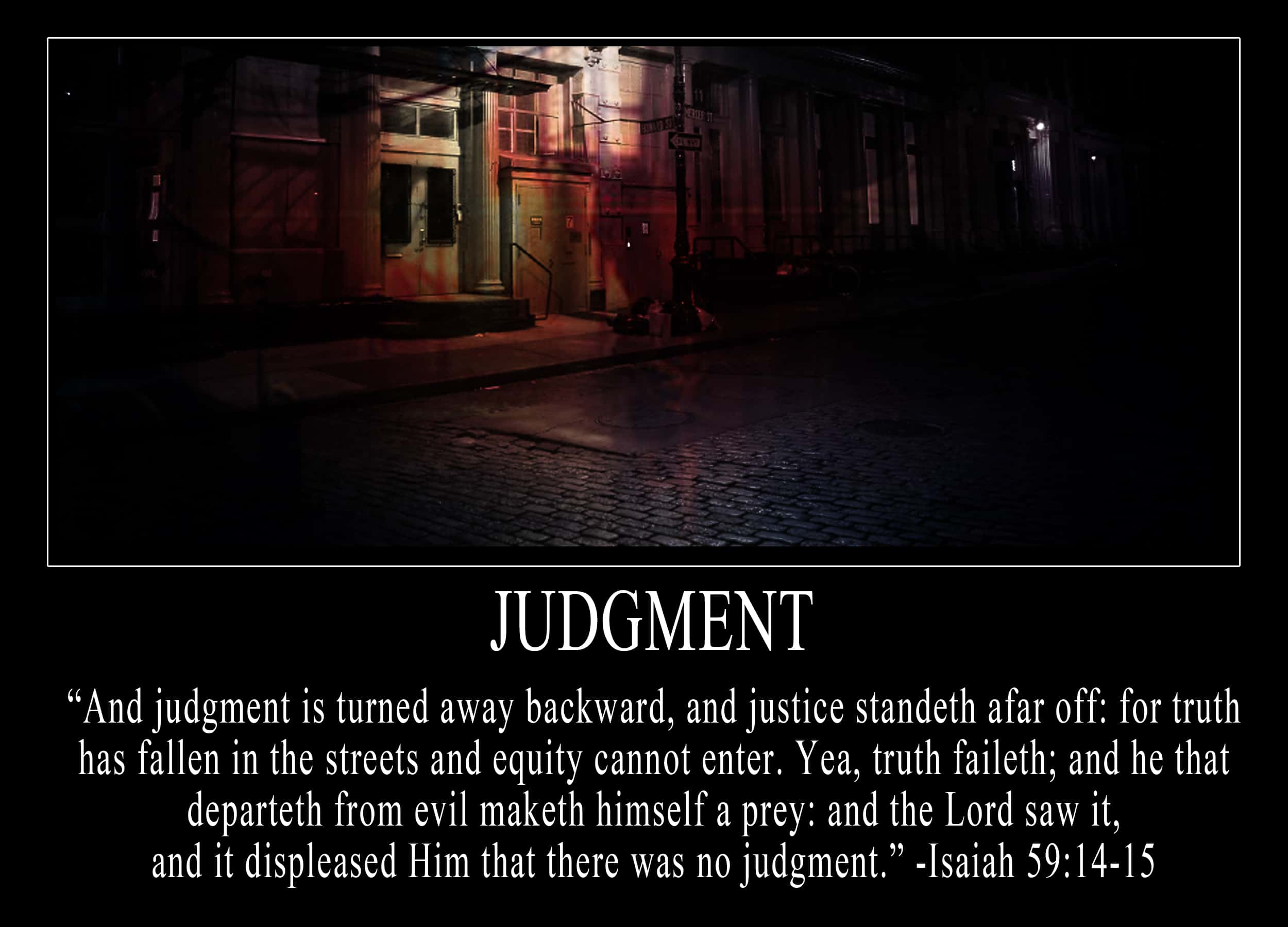 Who Are You To Judge?

“Darlin’, please don’t go into that building,” my friend pleaded as we stood outside the abortion clinic. “That is a place of death. You are going to walk in there a mother of a beautiful child, but when you leave you will still be a mother but, the mother of a dead child. You will never forget this day…you will regret it for the rest of your life. Please let us help you, avoid this terrible decision. We will help you keep your child. Jesus loves the little children.”

Sheepishly and forlornly, the teenage mother turned to my friend and whimpered, “I have Jesus in my heart. He understands the position I am in and He will forgive me for my sins. I am a Christian who made a mistake.”

“Sweetheart,” my gentle, loving friend begged the young mother, “if you have Jesus in your heart please don’t take him in to that place of death. He came to bring life. He gave you that child. It is a gift from God….let your baby live.”

Spinning like a weathervane in a gale wind, the young girl’s assumed-to-be mother who was joining the teenager in her sin directed her hateful stare towards my faithful friend. “We’re Christians too, but we actually follow what Jesus told us…JUDGE NOT,”she spit the words through her clenched teeth, “You would better represent Christianity if you followed that command as well. Young lady, who are you to judge?”

Sadly, most Christians think “judge not” is the eleventh commandment.

Unfortunately, as we do ministry on the streets, that is the one Bible verse that most people love to quote. They are not sure where it is found, but they do know that those are the words of Jesus. In fact, in today’s modern Christianity, “judge not” carries more weight than another of Christ’s one-liners, ”Go and sin no more.” This is a situation where a little Bible knowledge can be a dangerous thing.

JUDGE NOT and THOU SHALL NOT are not stand alone statements.

If you don’t mind, I think it would be healthy if we allowed the Lord to complete the thought. If your mother said to you “EAT NOT”…wouldn’t you like to know the rest of the statement? Eat not, why?

Mathew 7:1-5 “Judge not, that ye be not judged. For with what judgment ye judge, ye shall be judged: and with what measure ye mete, it shall be measured to you again. And why beholdest thou the mote that is in thy brother’s eye, but considerest not the beam that is in thine own eye? Or how wilt thou say to thy brother, Let me pull out the mote out of thine eye; and, behold, a beam is in thine own eye? Thou hypocrite, first cast out the beam out of thine own eye; and then shalt thou see clearly to cast out the mote out of thy brother’s eye.”

You see, Jesus commanded us to not judgehypocritically, He never commanded us not to judge. He asked us to remove the speck so we could “see clearly” to help our brother.

I Corinthians 2:15 “But he that is spiritual judgeth all things, yet he himself is judged of no man.”

We are instructed to judge all things….things…not people. Killing an unborn child is an action, a thing if you will, and actions, things, and fruits, are to be judged.

Matthew 7:15-18 “Ye shall know them by their fruits. Do men gather grapes of thorns, or figs of thistles? Even so every good tree bringeth forth good fruit; but a corrupt tree bringeth forth evil fruit. A good tree cannot bring forth evil fruit, neither can a corrupt tree bring forth good fruit.”Jesus clearly delineates between good and bad, and exhorts us to do the same. That requires judgment.

Still not convinced? How about I Corinthians 6:2-4“Do ye not know that the saints shall judge the world? and if the world shall be judged by you, are ye unworthy to judge the smallest matters? Know ye not that we shall judge angels?how much more things that pertain to this life? If then ye have judgments of things pertaining to this life, set them to judge who are least esteemed in the church.”

“….How much more the things that pertain to this life.” Abortion kills a child. Why are we afraid to say that? If abortion can’t be judged as sin, what good is the church? Abortion is not a woman’s mistake. It is her sin. Christ has called us to tell her. How else will she ever know she needs forgiven? Not all mistakes are sin and not all sins are mistakes. In fact, most sins are done on purpose.

But here is the gist of the issue. The sin problem in America is compounded by the “cheap grace” doctrine taught in most churches. Perhaps we should ask ourselves, does Jesus forgive pre-meditated sin? If I take a gun and shoot my wife, but before I pull the trigger I ask the Lord to forgive me for what I am about to do, does He forgive me? Heaven forbid!

The only sin Christ can’t forgive is unconfessed sin. He didn’t die for mistakes, he died for sins. We would do well to call it what he called it. Sin is sin, and it requires a payment. Without the shedding of bloodsin cannot be forgiven. How can you ask forgiveness for a sin if no one told you it was a sin?

And who grants forgiveness? If someone shoots my dog can my neighbor offer the shooter forgiveness? Or must the forgiveness come from the one who was offended? If Jesus says abortion is a sin, can I offer forgiveness to the one who had the abortion? Was I the one offended? Was the sin against me or was it against the child, and against God? Shouldn’t my neighbor let the person know it was MY dog that was killed and that the apology was owed to me? Sin requires Christ’s forgiveness, not mine. He paid the price, not me.

James 2:12 So speak and so do as those who will be judged by the law of liberty. 13 For judgment is without mercy to the one who has shown no mercy.Mercy triumphs over judgment.

Hmmm, mercy triumphs over judgment, huh? So, in other words, there can be no mercy unless judgment comes first.

Have you ever heard of a judge in a courtroom giving someone a suspended sentence? What does that mean? Would it be safe to say that the defendant was found guilty by the judge, but the judge offered the defendant grace or forgiveness from the penalty?Can the judge suspend the sentence before he pronounces the verdict? Of course not. Grace requires guilt. Guilt requires that some one cast judgment. Grace comes only after the guilty verdict has been determined.

Our sins have found us all guilty. When Christ died on the cross He in effect served your time. He didn’t suspend your sentence, He served your sentence. A price had to be paid. Remember, mercy triumphs over judgment. No judgment, no mercy.

The price of sin is death. That is a scary thing. The soul that sins, it shall die. If you sin, you die. Christ came so that you wouldn’t have to. He died in your place.

In an American courtroom what does a judge do? Is it not his job to listen to the evidence and determine the guilt or innocence of the defendant before him? He doesn’t judge the person, he judges the evidence. The penalty follows the verdict.

Can anyone imagine a defendant saying to the judge “judge not, Your Honor,” or “who are you to judge”? That would be ridiculous to say. Judging is his job. It would be a sad state of affairs if the judge was more worried about being nice than he was about rehabilitating lawbreakers and protecting the innocent.

What Would Jesus Do?

I’ll let you be the judge.

My experience has taught me that there is one Bible verse that all of America believes…those who call themselves Christians as well as those who do not. These two words have become the standard by which all Americans are to live their daily lives. These words are, “Judge Not…!” (Matthew 7:1)

I have previously written on this topic…way back in 2006. […above…]


Last week we did a ministry outreach at a concert called “The Gathering of the Jugaloes.” I am not an expert on the Jugaloes (WARNING: Link Contains Explicit Content). According to the Urban Dictionary a jugalo is an ill-mannered and impressionable idiot.

Jugalo is also the name given to the followers of the group Insane Clown Posse. Forgive me for appearing to be so judgmental, but my experience has taught me that most of the followers are “lost”, or at least non-Christians. This judgment is based on my own first-hand, eye-witness experience after having spent an entire afternoon engaging in dialogue with many of the “Jugs”.

Please stay with me…this will be short and painless.

After the weekend was completed, I posted on my Facebook page pictures of some of the “Jugs” I had a dialogue with. Visit my page and read how many are accusing me of being “judgmental” simply because I posted the pictures. The “Jugs” were, in fact, proud of their costumes.

The God-haters have programmed us “not to judge” while all they do is judge. The only thing that is considered wrong in America anymore is “judging.” Self-described Christians are the worst at accusing others of judging, while they themselves judge others for judging. (Are you following my logic here?)

So here is a little quiz for you brain-dead, public-school graduates, and for Christians who attend a seeker-sensitive church. This is very simple. Even though you probably don’t know anyone who is featured in this quiz, it is necessary that you make a choice based only upon the information provided.

Ready? Your bigotry is about to be exposed. Here we go.

If you were looking for someone to babysit your precious 3 year old daughter, who would you choose?

Which person would you hire as your financial adviser?

Which person would you trust to be your spiritual adviser?

Which women would you select to be your child’s school teacher?

Which religion appears to be most peaceful?

Which picture best represents how a nation should treat babies?

How did you do? If you picked “A” every time, you show good judgment. If you picked “B,” you are a danger to society. Everybody judges, but only the guilty fear being judged.

Isaiah 59:14-15 “And judgment is turned away backward, and justice standeth afar off: for truth has fallen in the streets and equity cannot enter. Yea, truth faileth; and he that departeth from evil maketh himself a prey: and the Lord saw it, and it displeased Him that there was no judgment.”