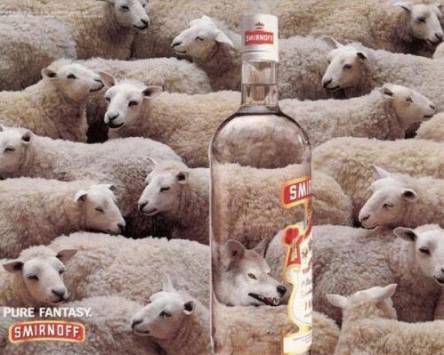 (left, one of a series of 12 Smirnoff ads taunting the sheep)

The Illuminati reveal their domination by placing their symbols on our currency, ID cards, civic and corporate logos. Their monuments, architecture, hand signs and signals are in music videos, movies and ads. Why do they proclaim their presence instead of maintaining secrecy?

“The Illuminati have characterized themselves as wolves among sheep. They are proud of this self-description and they hold to it. Predators stalk their prey. They do not simply move in and take the kill.“

Why do the Illuminati reveal themselves such as in the new German ID cards? Let’s begin by reviewing some of the “obvious” answers.

1. “The Illuminati permit exposure because they can get away with announcing their influence.”

Analysis:  True enough. There are no arrest warrants — that I’m aware of — waiting to be served upon Illuminati members. There is no law against them. Besides which, the general public has not been convinced that the Illuminati exist, or constitute a clear and present danger.

2. “Illuminati self-announcement is a gleeful taunt, against both those who would oppose them, and those who have no idea what is going on. They just can’t help themselves: they have to throw it in our faces.”

Analysis:  While this quite possibly fits with their psychological and emotional profile, as an explanation it leads nowhere.

3. “The Illuminati present a consistent routine of symbolic exposure in order to accustom the population to their increasing influence.”

Analysis:  The RFID chip in the new German ID cards is far more potent as an Illuminati symbol than a swastika or an image of Baphomet. ID card RFID chips are the precursor to biologically implanted chips.

That bespeaks Illuminati planning. RFID chips are a symbol. Yet, people generally do not see such items as RFID chips as “symbols”.

People mentally categorize RFID cards, and related items, as tools of technology. As a consequence, the significance of this sort of “symbol” passes the general population by. The Illuminati announce their presence in much deeper ways than static visual symbols, and we would be wise to point our attention to symbols and themes of more profound influence.

Back to the basic question:  Why expose themselves? Why not operate in complete secrecy, performing the coup de grace from behind a curtain, leading up to a final and totally unforeseen blow, culminating in total assumption of power?

The answer is partly to be found in Portisch’s article about German ID’s:  to “make the people afraid” (but NOT to “impress them”).

The Illuminati have characterized themselves as wolves among sheep. They are proud of this self-description and they hold to it. 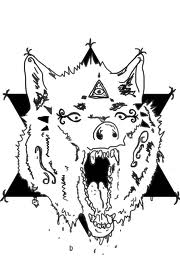 Predators stalk their prey. They do not simply move in and take the kill.

Whiffs of the scent of the stalker are permitted. Shades, shadows, unnerving shifts of position…the prey gets spooked.

The generation of adrenalin overpowers reason. The prey can sense the oncoming attack. Panic besets the prey, during the moments of final approach. Defensive tactics are forgotten, as panic takes over. The prey makes a wild race for the exit, but the predators have already encircled every possible exit.

The Illuminati see themselves as wolves stalking the sheep. They let out whiffs of their scent, generate shadows, perform deceptive motions, and generally aim to spook the prey. The kill has yet to come.

There is another reason.

The core Illuminati group have, for at least two thousand years, felt themselves engaged in a bitter vendetta amounting essentially to a blood-feud.

The Illuminati do not see themselves merely as assuming power, but taking BACK what they consider their rightful place and their natural property:  being in control of Human Destiny. In their minds, Human history is, and long has been, an issue of war.

The unexpected emergence of Christianity foisted — or at least very seriously delayed — a number of Illuminati plans. The accession of Christianity as a major social and political force spiraled out of control so rapidly that the comparatively small numbers of the ancient Illuminati were driven into hiding and secrecy. From this, the blood-feud — the Vendetta — emerged.

When the Illuminati publish their presence, it is not so that “normal” people can detect the symbols and formulate what most would see as spectacular conspiracy theories. It is an announcement of expectations of victory, in the manner of a vendetta.

When the Illuminati announce their influence, it is meant to be the voicing of a threat to their enemies and their prey. “We have established yet another foothold. We are coming for you, in due time.”