Clearly, the Communists that control the US economy have decided to exclude all those who resist induction into their cult. Yvonne Nachtogal relates how Paypal has cut her off.  It’s against the law to refuse to bake a gay wedding cake but it’s fine to deny Internet services to non-liberals.

“To my mom, who grew up in East Germany under the Nazi’s and then communism, it’s all too familiar. When her father spoke out against Hitler, her family’s financial support was cut off and they starved. My grandfather was arrested and died, conditions in jail having left him in failing health.”

I received an email from Paypal last Friday notifying me that my account had been “limited” due to “the nature of activities” on my site, christianobserver.net.

By “Limited” they meant that I cannot make purchases, receive or transfer money. The email instructed me to remove my Paypal button from the site and agree to their “acceptable use” terms, which I did. I’m waiting for the restrictions to be lifted and currently cannot offer a Paypal button on my site.

I had broken none of Paypal’s acceptable use policies unless they’re calling the truth about Kabbalah, Zionism, Freemasonry and Satanism “the promotion of hate.” My site exposes evil on many fronts and presents the gospel of Jesus Christ as the only answer. It vilifies no race or people group because I believe the battle for truth to be a spiritual one that is blind to those things. God sees each individual heart. (Gal 3:28)

I’ve been unable to get an answer from Paypal as to what “activity” they found offensive.

This isn’t the first time Paypal has used its muscle to back liberal agendas. In April, 2016, it backed out of plans to open a “global” operations center in South Carolina after the state passed a law targeting lesbian, gay, bisexual and transgender (LGBT) citizens.

Restriction of free speech is foreign to people in the U.S. or other western countries, but not to those under oppressive governments. To my mom, who grew up in East Germany under the Nazi’s and then communism, it’s all too familiar. When her father spoke out against Hitler, her family’s financial support was cut off and they starved. My grandfather was arrested and died, conditions in jail having left him in failing health. 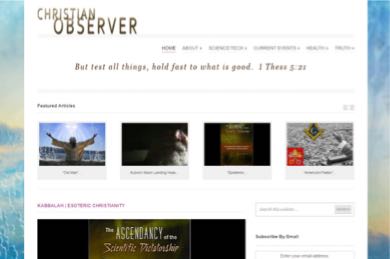 A young man from Egypt who I happened to be talking with when the email came in, reacted with surprise. “In America!?” He told he would expect that in his country, “If you talk about the government, nothing happens for you (meaning financially). Then you have two choices: Do without, or leave if you can. But America?”

There are other online payment providers, but the current trend in censorship is sobering. We’re quickly approaching a time, in fact it’s already here, when telling the truth will paint a target on our back. We are not in Kansas anymore. The stakes are very real and they are high. So we need to choose our battles and carefully count the cost.

As a Christian I believe we do that by measure of the gospel of Jesus Christ, remembering that his kingdom is not of this world. (Jn 18:26) The world is deceived by Satan and is under his control. (Rev 12:9, I Jn 5:19)

I visited my family in East Germany as an American teenager back in 1975 when the iron curtain still divided East from West. I remember how my cousins whispered their thoughts about the government and their friends refused to say anything at all. No one spoke openly. Fear was in the air. Today I’m thankful for that experience because I’ve seen first hand what the controls being implemented in America under the guise of “homeland security” and “political correctness” are leading to. Most people in this generation don’t think much of it because they don’t recognize what it is. Their naivety enables the advancement of tyranny.

You’re absolutely right…there’s no legal grounds for PayPal’s action against you. All they’re doing is harassing you because you’re a Christian and express anti-prevailing leadership views at every level (Masonic, Jewish, Papalistic, Judeo-Christian, etc., etc.). But, as you note, they get away with it because their coffers are unlimited, they control the medium (in this case, the payment portal), and they know you’re not likely to challenge their action. You need what they have, they know it….”whatcha gonna do about it.” Thugs.

They don’t take this position because they’ll win in a legal challenge. They’ll lose on the merits. But they know you’re not likely to legally challenge them because it’s prohibitively expensive and time-consuming. And if you should happen to challenge, they’ll make you pay by dragging out the litigation on every imaginable technicality and procedural hurdle. The cases that you cited* all go through the same process to come up with a publishable opinion. There’s an underlying challenge in a state or federal court of original jurisdiction (think of this as the suit you have to file against PayPal to force their hand). That case lasts 1-3 years, gets resolved by a jury in favor of one or the other party, and then the losing party appeals. That underlying case probably cost each party conservatively anywhere from $200k-$600k in legal fees…chump change to thug corporations. And even then, the case doesn’t make precedence that’s publishable, as the cases you cited did. They have to go through many more hundreds of thousands of dollars in appeals and remands to the court of original jurisdiction to get a publishable opinion.

Some folks might take the time to file suit and try to get a “quick” resolution within 6-12 months at a settlement conference….but even that would conservatively result in $50-$100k in litigation costs and attorneys’ fees. These stakes are too high for 99.99999% of us…PayPal knows it.

Long and short – they know that most of us just want our money and we’ll jump through their hoops to have the privilege of using their service to get it…even if it means they trample – and we surrender – our First Amendment rights. It’s their game, they’ve rigged it, and we don’t have the time, the financial backing, or the resources to legally challenge.

Columbia/Willamette Inc. v. American Coalition of Life Activists, 290 F.3d 1058 (9th Cir. 2002). A federal appeals court ruled that an anti-abortion website was not protected by the First Amendment. But their website had unwisely posted names and addresses of clinics, doctors and their families.

Dear Sir,
your posting about the Paypal shutdown of Ms Yvonne Nachtigal does indeed ring a nasty bell. You see, I grew up in East Germany. Both parents and their families lived through the Nazi times and the Russian occupation afterward. My father, his brother and his mother got bombed out of their Dresden home by the British and then shot at by British Fighter pilots down at the river Elbe for being of the Nazi race.

I grew up feeling guilty for being German all my life and the Communist indoctrination. When the Wall came down, I was there and I thought I was free and my kids grow up in Freedom and without war. The awakening is a rude one. It is a bit the like the British 1960’s series “The Prisoner”. You are just not ever free.

The Germano-Russian Nazi/Communism is back with a venegance, in English, global and an unbelievable Satanic force. Everything bad is back. I am so very sad that this is happening and pray that Jesus would keep us from the depression and oppression and the emotional/spiritual deadliness that come with this development.

I don’t feel guilty anymore. It wasn’t my fault and it isn’t my fault what is happening now. I make no excuses for Elites’ bad decisions and will not take responsibilities for their actions.

God bless you and keep you and your family safe. Send Ms Nachtigal my regards. It isn’t over until the fat lady sings…