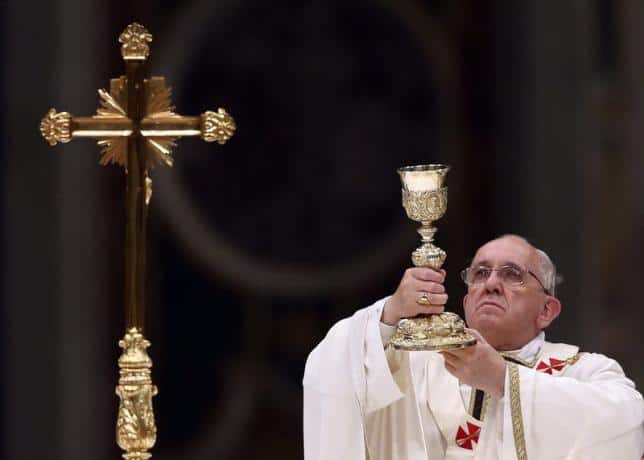 By Komfie Manalo | The Gospel Herald
Pope Francis lifts up the chalice as he leads a vigil mass during Easter celebrations at St. Peter’s Basilica in the Vatican April 19, 2014.
REUTERS/ALESSANDRO BIANCHI

Pope Francis on Wednesday called on Chinese Catholics to remain their allegiance to Vatican and to stay with the Church in Rome, in a move that is expected a rebuke from the communist Chinese regime.

The Holy Father’s appeal comes ahead of Sunday’s feast of Our Lady, Help of Christians, celebrated throughout the world on May 24. The day is also as a day of prayer for Chinese Catholics, which was established in 2007 by Benedict XVI, said official News.va.

Pope Francis said in his weekly general audience in the Saint Peter’s square, “Ask Mary to help Catholics in China to be ever more credible witnesses of this merciful love in the midst of their people, and to live spiritually united to the rock of Peter on which the Church is built.”

Pope Francis also noted that the statue at the Shrine of Sheshan depicts Mary holding the Child Jesus in the air with his arms outstretched “in a gesture of love and mercy.

The Vatican state has no diplomatic ties with Chine since 1951 since Mao Zedong gained control of the country.

However, Pope Francis called for the normalization of diplomatic relations with China when he visited South Korea in August, reported Agance France Presse. But the pontiff has set conditions, including allowing Chinese Catholics the right to exercise their religion freely. He also called on Beijing to allow the Vatican to appoint bishops there.

An estimated 12 million Chinese are practicing the Catholic faith in China, but at least 50 percent of them attend Church services under the auspices of a state-controlled church. The other six million practice their religion in underground Catholic Churches that swear allegiance to the Vatican.

Pope Francis has indicated he would visit China if the Roman Catholic Church is allowed to do its job there.

On Wednesday, Chinese President Xi Jinping warned that religions must be independent and free from foreign influence as the communist state tries to initiate more rules to further its control over Christianity rapid growth in the region.

Xi told a high-level party meeting that aims to unite non-Communist Party groups and individuals, “We must manage religious affairs in accordance with the law and adhere to the principle of independence to run religious groups on our own accord. Active efforts should be made to incorporate religions into socialist society.”

He said that the communist party’s religious work should be focused on winning the hearts and mind of the public for the party.

“Active efforts should be made to incorporate religions into socialist society,” Xi said, adding that the party’s religious work should be about winning over the hearts and minds of the public for the party.

Since the establishment of the country’s religious policy in the 1990s, China’s communist government has expressed fear that hostile foreign forces can use religions to “infiltrate Chinese society by winning over the population and subverting party rule”. Consequently, it has banned foreign missionary work, refused to acknowledge any appointment by foreign religious entities such as the Vatican, and declared any unregistered religious groups, such as underground churches, illegal.