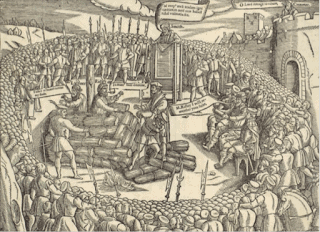 Read Part 1: TOGETHER 2016: Unbiblical Unity on the National Mall

“Remember your promise in baptism; Christ His mercy and blood-shedding: By whose most holy sprinkling, of all your sins you have free pardoning. Of Christ’s body this is a token, which on the cross for your sins was broken. Wherefore of your sins you must be forsakers, if of Christ’s death ye will be partakers.”
~ Hugh Latimer, rejecting Roman Catholic dogma, martyred on October 16, 1555[2]

or
“Recycling and Reprocessing”?

OUROBOROS: Gnostic/alchemical image of the serpent swallowing its own tail, used in alchemical manuals…. Also as a general symbol of INFINITY in its dynamic function of inexhaustible recycling and reprocessing.[4][bold added]

TOGETHER 2016: Building the Apostate Unity Bridge
In July, a massive rally[5] took place on the Washington Mall in an effort to forge Christian unity and solidarity, and to undoubtedly eliminate the centuries-long rift between Evangelicals and Catholics. The event was called Together 2016. Not only did many Christian celebrities, authors, musicians, and popular teachers head the event lineup[6], but Pope Francis was also scheduled to promote the gathering and its broader message from Rome via video. We reported on this disquieting rally in a detailed post called “Resetting the Reformation: Together 2016 – Unbiblical Unity at the National Mall.”

In promotional statements made by Together 2016 organizer Nick Hall, it was clear that he believed the Pope’s endorsement was necessary to facilitate this false unity and negate polar differences between Evangelicals and Catholics going back five hundred years. Hall even referred to the Pope as “His Holiness”, a title reserved for the Lord Jesus Christ alone:

“We are humbled and honored by his [the Pope’s] involvement and are eager to share his message with the crowd that gathers at Together 2016,” he [Hall] told the Christian Post last month. “That His Holiness would choose to speak into this historic day is a testament to the urgency and the need for followers of Jesus to unite in prayer for our nation and our world.”

Hall also traveled to Rome to meet with the Roman Catholic leader and other Vatican officials ahead of the event.

“We’ve been praying for this and God has been answering our prayers,” he said in an online video in speaking of Bergoglio’s [Pope Francis’] support of the gathering, explaining that he and a representative from the Vatican discussed how to unite Christians and Catholics.

An endorsement from Bergoglio, which had been posted online, was also played on the jumbotron for Together 2016 attendees.[8][bold added]

In the video[9], the Pope even holds up a Together 2016 T-shirt, adorned with Hall’s Reset logo and an American flag, inviting viewers to wear one “in unison.”[10]

Refashioning Occult Symbolism
A careful examination of the Together 2016 T-shirt that the Pontiff displayed for his vast video audience reveals Nick Hall’s Reset/Together 2016 logo which is hidden-in-plain-sight in the word “TO-GE-TH-ER.” Note the letter “O” in the T-shirt held by the Pope in the graphic above.

After seeing this familiar “O” symbol repeatedly in Hall’s ministry websites[12], event advertisements[13], and prominently displayed on the cover of Hall’s book, Reset, it finally occurred to me that I’d seen a variation of the same symbol in occult materials. This “O” is called anOuroboros and it is the circular depiction of a serpent eating its own tail, symbolizing monistic oneness—and thus it is not true Christian unity (John 17:20-23).[14]

Note this definition of the Ouroboros from the Encyclopedia Britannicaonline:

Ouroboros, emblematic serpent of ancient Egypt and Greece represented with its tail in its mouth continually devouring itself and being reborn from itself. AGnostic and alchemical symbol, Ouroboros expresses the unity of all things, material and spiritual, which never disappear but perpetually change form in an eternal cycle of destruction and re-creation.[16][bold added]

The Ouroboros is also a prominent feature of the Theosophy emblem depicted below,[17] an occult society founded by Madame Helena Petrovna Blavatsky[18]:

The Ouroboros is also found in other esoteric societies such as the Hermetic Order of the Golden Dawn (alchemy).[19]

Why is Hall using the Ouroboros “O” as his Reset logo?
This is an important question. Compare the unbiblical and esoteric form of unity symbolized in the Ouroboros with its idea of “an eternal cycle of destruction and re-creation” to Hall’s concept of a “reset” button which, when mystically pushed, formulates profound spiritual change. Here is Hall’s vision of his RESET Movement:

A reset to our created purpose.

In 2012, a group of people from different backgrounds, known then as RESET Movement, began sharing the message of a “reset” at events and gatherings. The term relates to technology, where a reset clears past errors and gets the system working toward its created purpose. In the same way, every person is created for a purpose—but we have downloaded the wrong files, corrupted the system, and fallen away from God’s best for our lives. Each of us needs a reset, and Jesus offers everyone a supernatural reset.[20][bold added]

Clever as it sounds, Hall’s “reset” message is not biblical. It is NOT the true Gospel. We aren’t hapless victims who have unwittingly “downloaded the wrong files” that have “corrupted the system.” We are sinners born of Adam who need to confess and repent of our sin and believe that Jesus Christ alone, the Lamb of God, paid for our sin on the Cross with His own blood. It is His sacrifice that redeems true believers from the deadly eternal sin that corrupts us from within and cleanses us anew to walk in His light until we see Him in glory (Rom. 5:12-21; Rom. 10:9-13; Titus 2:14; 1 Jn. 1:7; 1 Pet. 1:18-19; Acts 17:30-31; Acts 2:38;Matt. 4:17).

The saving Gospel of Jesus Christ cannot be equated to a crude computer virus that has invaded the human system from without. Rather than a conscious and contrite inner acknowledgment of unrighteousness and a hearty recognition of the eternal saving gift of the Creator to completely purge that sin, the artificial remedy of this false gospel says that those infected by such an outside invader simply need to push the master ‘reset’ button, named ‘Jesus’, and rid themselves of unwanted and corrupted data enabling them to live up to a ‘purpose’. Sounds like Rick Warren.[21]

Here is the simplicity of the Gospel of salvation:

“If we confess our sins, He is faithful
and just to forgive us our sins,
and to cleanse us from all unrighteousness.”
(1 John 1:9)

Is Hall’s use of the Ouroboros “O” intentional? Does he mean to convey the esoteric meaning of this symbol? After all, there is not much difference between the term “reset” and what the Ouroboros symbol stands for. Plus Hall’s expansive “reset” of Christianity even includes the logo-flashing Pope. Does Hall’s “reset” pave the way for unity and oneness with other world religions?

For example, the Ouroboros “O” is also paralleled by the Japanese Enso symbol representing Zen Buddhism:

The anti-Christian spiritual meaning of the Enso is explained in an article titled, “Zen Circles of Illumination”:

ZEN ART IS SPIRITUAL art in its purest sense. It was done not by professional artists, but by Zen monks and nuns who spent extremely disciplined lives of meditation, in a search for enlightenment and awakening to the true nature of reality. That they were painting from their own personal knowledge of this reality, rather than from doctrines handed down, is the very foundation of this art-form’s compelling power. It is believed in Japan that the character and spiritual realization of the monk or nun are transmitted into the painting itself… The Enso, or Zen circle, is one of the most appealing themes in Zen art.The Enso itself is a universal symbol of wholeness and completion, and the cyclical nature of existence, as well as a visual manifestation of the Heart Sutra, “Form is void and void is form.”[23][bold added]

The fact that this unbiblical knowledge is channeled onto canvas by Zen monks seeking spiritual enlightenment apart from “doctrines handed down” should alarm any true believer in Christ. This belief system is at complete odds with God’s Word. This entire Eastern concept of unity and enlightenment is diametrically opposed to sound Christian doctrine.[24] One Zen Buddhist source defines enlightenment—achieved through Eastern meditation—this way: “Illumination: This mighty word in essence and strength is used…to emphasize the transcendental mystic experience that consists of experiencing the Tao, true Zen, Reality.”[25]It could also be expressed in the ancient occult maxim, “as above, so below”; i.e., “all is One.”[26]

It is quite alarming, therefore, to discover that Nick Hall, the organizer of the Pulse/Reset/Together 2016 movement chose a re-crafted Ouroboros/Enso “O” to symbolize his Christian ministry and to further signify Christian unity. The following exhibits are a montage of this occult symbol used throughout Hall’s media graphics:

Re-Sparking a Global Movement
On July 15, 2016, I published an extensive article titled “Resetting the Reformation: TOGETHER 2016: Unbiblical Unity on the National Mall”detailing concerns about Nick Hall’s movement and his event at the Washington Mall.

As it turned out, things did not go as event organizers had planned on July 16. Together 2016 was shut down by the U.S. Park Police five hours ahead of schedule due to enormous heat casualties.[33] It is unclear whether or not the Pope’s endorsement video was shown to the crowd or live streamed online before the plug was abruptly pulled at 4 p.m., but the unprecedented video of Pope Francis’s ecumenical invitation is currently posted on the Together 2016 Facebook page.[34]

Nonetheless, this enormous event re-sparked a global movement that has been smoldering in the background ever since the late Pope John Paul II became the Roman Pontiff in 1978. . . .

“For I am not ashamed of the Gospel of Christ: for it is the power of God unto salvation to everyone that believeth; to the Jew first, and also to the Greek. For therein is the righteousness of God revealed from faith to faith: as it is written, the just shall live by faith.”
(Romans 1:16-17)