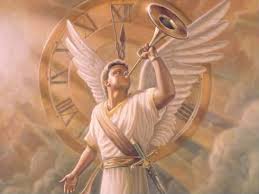 “America is going to be destroyed by fire! Sudden destruction is coming and few will escape. Unexpectedly, and in one hour, a hydrogen holocaust will engulf America — and this nation will be no more.”

The quote is the first paragraph, chapter one from a prophetic book written by the late David Wilkerson, 1985, titled “Set the Trumpet to They Mouth, and is the topic of the Rick Wiles TruNews show, as Wiles and Chris Steinle is joined by another prophetic author John Shorey, to discuss Wilkerson’s vision and how we are watching it being fulfilled right now!

” America has sinned against the greatest light. Other nations are just as sinful, but none are as flooded with gospel light as ours. God is going to judge America for its violence, its crimes, its backsliding, its murdering of millions of babies, its flaunting of homosexuality and sadomasochism, its corruption, its drunkenness and drug abuse, its form of godliness without power, its lukewarmness toward Christ, its rampant divorce and adultery, its lewd pornography,its child molestations, its cheatings, its robbings, its dirty movies, and its occult practices. In one hour it will all be over. To the natural mind it is insanity to come against a prosperous, powerful nation and cry out, ‘It’s all over! Judgment is at the door! Our days are numbered!’ The Church is asleep, the congregations are at ease, and the shepherds slumber. How they will scoff and laugh at this message. Theologians will reject it because they can’t fit it into their doctrine. The pillow prophets of peace and prosperity will publicly denounce it.”

“I no longer care. God has made my face like flint and put steel in my backbone. I am blowing the Lord’s trumpet with all my might. Let the whole world and all the church call me crazy, but I must blow the trumpet and awaken God’s people. Believe it or not, America is about to be shaken and set aside by swift and horrible judgments. Many other praying believers who have been shut in with God are hearing the very same message – ‘Judgment is at the door! Prepare,awaken!’”

John Shorey is introduced at the 7:15 minute mark to discuss his own vision and prophecies and how they tie directly into Wilkerson’s, stating that while he published his first two, he would not be publishing this latest because there is not “enough time left,” and that seeing Wilkerson’s from 30 years ago and biblical prophecies from 2,000 years ago, “Nows the time that these events are coming to pass.”