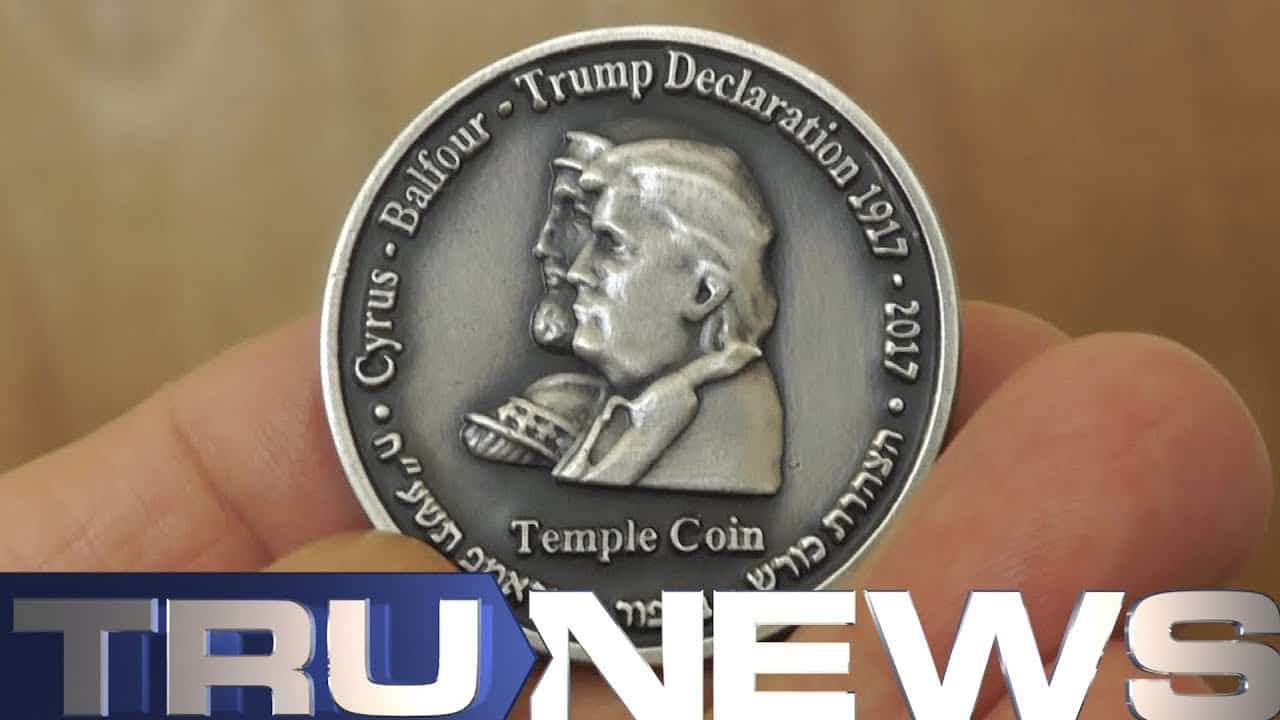 This recent Breaking Israel News (BIN) article is intended to be a warning shot for those telling the whole truth. Their message is loud and clear. “Shut up or else.” They’re signaling the end of freedom of speech as they paint those who see through their charade and deceit as haters. Not unlike Alex Jones, Wiles is being used as an example. Rick Wiles is a big name, so this is clearly being used to send a message.

[*Note: Rick Wiles  has had questionable programs, some strongly supporting president Trump. Wiles  at one point boasted about  his  world vision  ministry, that he had a vision that the Lord had led him to a connection  to Trump,  that  he was invited  to be covering  a lot of Trump  activities  around  the  world in  the hopes  of  something  good. He gave  an impression  of  one  world  government tied  to religion. A friend wrote in and asked him  why  he  would  be  “sucking  up to the  president.” He received the reply “how dare  you  suggest  we  are sucking  up  to the  president? You are banned forever.” The point being that Wiles, like Alex Jones, is being used to misdirect and ridicule those whose eyes God is opening to the truth.]

What’s interesting to me is how they lay out the entire plan in the article, complete with problem of a false messiah. The blatant scripture twisting in the article shows how Bible illiterate they’re counting on Christians being… Sadly, most Christians are that naive.

“This BIN article, we knew it was coming but boy it took my breath away how AGGRESSIVELY they defended their Deception & attacked Rick. They are MASTERS at playing the “Antisemitism” card & Churchianity has been SO INDOCTRINATED with the lie of Dispensation doctrine, support for Zionist Israel & the utterly HERETICAL False teachings about a 3rd Physical Temple building that they’re going to be up in arms, further instigated to attack & squash ANY attempts at showing the Truth of Scripture & history regarding this & the FACT that Zionists, Ashkenazi “Jews” are the Synagogue of Satan & those who say they are Jews but do LIE.

Rick Wiles I think had a “Saul on the road to Damascus” kind of awakening to the Truth, I know he’s been kinda mainstream in the past & I never had much truck with him, but the past couple of years I’ve seen him really start trying to get a lot of this Truth out to the Churchianity crowd & they’ve been dragging him through the mud & launching nasty attacks against him from the moment he started exposing this. I may not fully trust him but i believe he DID have a change of heart & understanding & Abba HAS BEEN & will continue to use him to help pull those who are truly seeking the Truth & belong to HIM out of the Zionist Deception. At least until they kill him or ruin him completely, cutting out his ability to share this information. They’re coming after our ability to share this as well, clearly this is a pretty blatant warning.” – Allison Page Walters

Here is the video being attacked in the article. If it is removed, please send me an email through my contact link:

Breaking Israel News has been attacked by a Christian media ministry that is reiterating classic antisemitic claims of Jewish global domination but there is a new twist in this age-old hate-speech: pro-Israel Christians are included as part of the conspiracy.

TruNews with Rick Wiles produced several videos focusing on articles published on Breaking Israel News. In a video released on YouTube titled “Trumped Up Prophecies: How Kabbalah Wizards & Christian Zionists Are Trying to Build a Third Temple“, Wiles accused Jews of using “witchcraft” to influence President Trump into building the Third Temple, which he called “the devil’s temple.” He also accused prominent evangelical leaders of accepting bribes from Jews to advance their agenda.

In the video, Wiles explained that he disagreed strongly with Christian leaders for what he termed “heresies.” He claimed that evangelical leaders were scheming with “satanic kabbalah mystics…to use President Donald Trump to pave the way for the building of a Third Temple in Jerusalem.” Wiles defined the Jewish practice of kabbalah as “voodoo that Jews do…from Satan,” describing gematria, traditional Jewish numerology, as “witchcraft” forbidden by Biblical mandate.

“This is why the Jews were kicked out of the Promised land,” Wiles said. His co-host described Christian Zionism as a “fellowship with the devil.”

“[This is a] Satanic marriage between kabbalah wizards and American evangelical pastors and Bible prophecy teachers and ministry leaders,” Wiles stated. “Kabbalah is witchcraft and sorcery from Satan.”

“They are in alignment with kabbalah wizards,” Wiles said. “I didn’t know how Zionist Pat Robertson was.”

He accused Robertson, his former employer, of “accepting the offer.”

“What is the amount they were given? What is the price tag?” Wiles asked.

Christian author and president of the Jerusalem Connection Shelley Neese noted that Wiles frequently perpetuates what she classified as “classic antisemitism” but with a new twist.

“He accused AIPAC (the pro-Israel political lobbying group) of controlling the world,” Neese told Breaking Israel News. “But when he accuses the Jews of nefarious plans, he is including Christian Zionists in with the Jews. This is the first time in history that Christians have been included in antisemitic attacks.”

As an advocate for Israel, Neese is aware of the growing Jewish-Christian alliance and sees it as being mutually beneficial.

“American Christian leaders have been standing with the Jews and I am seeing Jews reciprocate, standing with us on matters that are important to us, even when they are issues that don’t touch upon Israel,” Neese said. “We have common values that are being attacked here in America. We feel so alone that this alliance is important for our morale and spirit.”

Though Wiles clothed his statements in Christian terminology, Neese rejected that they had any theological basis.

“Over and over, Wiles explained that Jesus said that He was the Temple, that he was the Promised Land,” Neese said. “He says things that Jesus doesn’t say. By making the land and the promises of the prophets entirely spiritual, Wiles is putting his words in the mouth of Jesus.”

“The flag the evangelicals are waving is that if we are looking for a new earth, it will be centered in a physical Jerusalem,” Neese said. “We don’t need to spiritualize that. When it is built, it will be the House of Prayer for all Nations the prophet promised.”

Wiles began working in media in the 1980s and has worked for the Christian Broadcasting Network and Trinity Broadcasting Network. Wiles resigned in 1998 from TBN to pursue a career as a radio host, founding TruNews which also served as a ministry. TruNews has other offensive videos on their YouTube channel with anti-Semitic titles such as “Global Zionism Exposed“, “How Much Power Does Israel Have Over the US” and “Israel is Using Technology to Dominate the World.”

The TruNews video which has over 72,000 views, went on to target the Jews’ desire to build the prophesied Third Temple.

“This witchcraft is driving for a war in Jerusalem,” co-host Edward Szall said. “Right now, the Muslims hold the Temple Mount. They will need to invade or take that ground.”

It should be noted that the Temple Mount was, in fact, conquered by Israel in the 1967 Six-Day War.

Wiles admitted that the “average Christian Zionist” supports the Jews’ efforts to bring about a prophesied Third Temple in what he termed a “marriage from hell.”

“It is blasphemy to support any aspect of building the Temple,” Wiles said. “Because that is the devil’s temple…They [the Jews] are trying to bring in the antichrist, the son of perdition.

Wiles made the perplexing claim that “God never told people to build the first temple or the second temple.”

“Criticizing the Jewish Third Temple is completely unbiblical,” Enarson told Breaking Israel News. “It is God’s house. You can’t find anything in Christian literature that would contradict building the Third Temple. Jesus loved the Temple.”John Enarson, the Christian Relations Director for Cry For Zion, explained the theological flaw in Wiles’ Christian criticism of the Jewish desire to build the Third Temple.

Enarson understood the basis for Wiles’ misrepresentation of the Third Temple.

“On one hand, Christians will do everything they can to hasten the Messiah,” Enarson explained. “But on the other hand, some Christians are afraid that when the Jews want to rebuild the Temple, they will bring a false Messiah as well as the difficult events that were prophesied. Clearly, this is a contradiction. You can’t push the Messiah away. The theology isn’t entirely thought through. They are excited about one but concerned about the other.”

“You can see the end of days as the apocalypse or as the great redemption,” Enarson said. “The truth is that it is both. It is scary but it also contains hope.”

Enarson also noted that there is a difference between divination and sorcery which are forbidden, and codes which are essential to the Bible.

All the kings of the north, whether far from or close to each other—all the royal lands which are on the earth. And last of all, the king of Sheshach shall drink. Jeremiah 25:26

The term Sheshach has traditionally been explained as a reference to the city of Babylon. This is interpreted through the Atbash code, a monoalphabetic cipher formed by taking the alphabet and mapping it to its reverse, so that the first letter becomes the last letter, the second letter becomes the second to last letter, and so on. Atbash seems to date back to the days of the major prophets) the letters of the Hebrew alphabet are substituted to its correspondent letters. Thus (Sheshach) ששך becomes בבל (Babylon).

“Gematria and codes are something Christians should respect,” Enarson said.

At various points in the video, Wiles resorts to petty insulting of many Jewish rabbis.

“As a Jew, this video is offensive on so many levels,” Rabbi Weisz said. “For the first time in history, Jews and Christians are coming together. But clearly, Christian antisemitism is still a major threat, coming from both the left and the right.”

“As someone deeply committed to building relationships between Christians and Jews, I call on my Christian friends to renounce antisemitism in all its vicious forms and in every pathetic forum that it appears,” Rabbi Weisz concluded.

This is also interesting in light of BIN’s (many) articles declaring the intent of the Sanhedrin to rule the world through their “Organization of 70 nations” under the Talmudic “Noahide Laws.” They’re saying this themselves… and dispensational Churchianity is seeing it all as a glorious fulfillment of prophecy.

“Each nation shall be solely responsible for maintaining a fitting and proper justice system as per the Seven Noahide Laws incumbent upon all of mankind.” source

I want to be clear that I am not endorsing Rick Wiles or jumping on anyone else’s bandwagon. It’s a full time job trying to keep up with what they’re up to and that’s by design. It is more important than ever today to be walking in Holy-Spirit-given discernment. That makes it imperative that we surrender ALL to Jesus so we have a pure heart before him. We need to allow God to make us more and more like Jesus, who was able to say, “Hereafter I will not talk much with you: for the prince of this world cometh, and hath nothing in me.” John 14:30