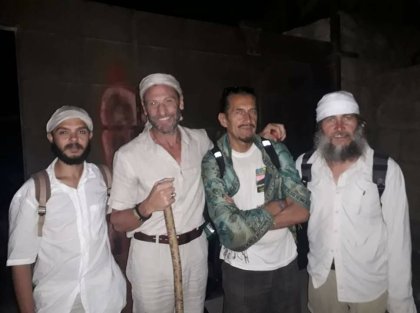 If you have not already seen this, these are the two guys who performed last week’s blasphemous sacrifice on the Mount of Olives.

Two Men Who Performed Noahide Sacrifice on Mount of Olives from Christian Observer on Vimeo.

“Soooooo….these are the 2 dudes that did the Abominable sacrifice of a lamb on the Mount of Olives alongside the poking and probing, self appointed Sanhedrin. This sacrifice was specifically done by two “gentiles” with the intention of initiating the Noahide laws into rule throughout the earth (and killing off true Christians). Furthermore, it was an inversion of the sacrifice of Jesus Christ and His death as THE LAMB OF GOD, also on the Mt of Olives.

To add further insult to injury, this dude has named himself “Melchizadek” and is the self proclaimed “high priest” that is to bring the two branches together. His sidekick calls himself Stone Justice (who clearly is under a demonic hold in this video). (His real name is Evan something). Are you all following??

They used the verse regarding the Cornerstone being rejected in the BIN article that spoke about this sacrifice.

>>Jesus Christ of Nazareth, Son of the Most High God, Creator of ALL things is our High Priest who came in the order of Melchizedek and was the FINAL Passover Lamb. HE is the Cornerstone that the builders rejected.<<

…In this BLASPHEMOUS and utterly repulsive video, they claim that Yeshua (Jesus) will stand another trial because He was a sinner, Melki has been given authorization to cast stones at God, he is here to bring judgement, all religions lead back to God, Kabbalah is truth, those who believe Paul’s writings worship him as Messiah and are deceived, etc., etc., etc.

If you have the stomach to sit through this, please cover yourselves in prayer first. (…and consider bathing in anointing oil, having a barf bag handy, a box of Kleenex for the tears….)”

Tzadik showed up on FB to argue his position which turned into a lively debate. This comment by Facebook member Allison Page Walters is spot-on and serves as an example of how believers ought to be standing up against these false prophets:

Allison Page Walters “Malki Tzadik, you are a False Prophet by every definition, Indwelt by an Antichrist spirit called the Maggid, one of the 3 Unclean spirits like Frogs that have been released into the World to gather the Nations against the Messiah just prior to His Return. You are a heretic, blaspheming the Holy Spirit, offering Animal sacrifice to Ba’al, playing the role of a lapdog to the Synagogue of Satan led by the False Sanhedrin court that was REPLACED by the 70 Disciples Christ sent out & now fulfilled in COMPLETION through the Body of Christ who serve as His Priesthood, a Kingdom of LIVING SACRIFICES who serve Him with all of our Hearts, Minds, Souls & Strength, offering our hands, feet & mouths to be used by HIM in obedience to HIS Will, NOT our own. You have NO understanding of Scripture or Truth because you serve the god of your SELF, your own desires & Delusions of grandeur, placing your OWN wants & beliefs far above anything of God on the Throne of your heart. You bear False witness against everyone who stands & attempts out of Love to show you your error through Scripture & you claim to be the embodiment of the Prophet Elijah, who’s Spirit ALREADY came in JOHN THE BAPTIST. You deal in Falsehood, Delusions & Heresy, attempting to bring charges & Judgment against the Elect of the Father through Jesus Christ but Malachi your own Judgement will find you & you will fall upon your knees before the King & Creator of ALL Good things, only then coming to truly KNOW the depth of your folly & reprobate mind. Everyone gathered here SEES YOU for what you ARE. Repent Malachi, before it’s too late, though i fear for you it already is.

Romans 16:17-20
Now I beseech you, brethren, mark them which cause divisions and offences contrary to the doctrine which ye have learned; and avoid them.

18 For they that are such serve not our Lord Jesus Christ, but their own belly; and by good words and fair speeches deceive the hearts of the simple.

19 For your obedience is come abroad unto all men. I am glad therefore on your behalf: but yet I would have you wise unto that which is good, and simple concerning evil.

20 And the God of peace shall bruise Satan under your feet shortly. The grace of our Lord Jesus Christ be with you. Amen.

2 Peter 2
But there were false prophets also among the people, even as there shall be false teachers among you, who privily shall bring in damnable heresies, even denying the Lord that bought them, and bring upon themselves swift destruction.
2 And many shall follow their pernicious ways; by reason of whom the way of truth shall be evil spoken of.
3 And through covetousness shall they with feigned words make merchandise of you: whose judgment now of a long time lingereth not, and their damnation slumbereth not.
4 For if God spared not the angels that sinned, but cast them down to hell, and delivered them into chains of darkness, to be reserved unto judgment;
5 And spared not the old world, but saved Noah the eighth person, a preacher of righteousness, bringing in the flood upon the world of the ungodly;
6 And turning the cities of Sodom and Gomorrha into ashes condemned them with an overthrow, making them an ensample unto those that after should live ungodly;
7 And delivered just Lot, vexed with the filthy conversation of the wicked:
8 (For that righteous man dwelling among them, in seeing and hearing, vexed his righteous soul from day to day with their unlawful deeds;)
9 The Lord knoweth how to deliver the godly out of temptations, and to reserve the unjust unto the day of judgment to be punished:
10 But chiefly them that walk after the flesh in the lust of uncleanness, and despise government. Presumptuous are they, selfwilled, they are not afraid to speak evil of dignities.
11 Whereas angels, which are greater in power and might, bring not railing accusation against them before the Lord.
12 But these, as natural brute beasts, made to be taken and destroyed, speak evil of the things that they understand not; and shall utterly perish in their own corruption;
13 And shall receive the reward of unrighteousness, as they that count it pleasure to riot in the day time. Spots they are and blemishes, sporting themselves with their own deceivings while they feast with you;
14 Having eyes full of adultery, and that cannot cease from sin; beguiling unstable souls: an heart they have exercised with covetous practices; cursed children:
15 Which have forsaken the right way, and are gone astray, following the way of Balaam the son of Bosor, who loved the wages of unrighteousness;
16 But was rebuked for his iniquity: the dumb ass speaking with man’s voice forbad the madness of the prophet.
17 These are wells without water, clouds that are carried with a tempest; to whom the mist of darkness is reserved for ever.
18 For when they speak great swelling words of vanity, they allure through the lusts of the flesh, through much wantonness, those that were clean escaped from them who live in error.
19 While they promise them liberty, they themselves are the servants of corruption: for of whom a man is overcome, of the same is he brought in bondage.
20 For if after they have escaped the pollutions of the world through the knowledge of the Lord and Saviour Jesus Christ, they are again entangled therein, and overcome, the latter end is worse with them than the beginning.
21 For it had been better for them not to have known the way of righteousness, than, after they have known it, to turn from the holy commandment delivered unto them.
22 But it is happened unto them according to the true proverb, The dog is turned to his own vomit again; and the sow that was washed to her wallowing in the mire.”

My question is, where is the church in discerning these egregious heresies? My heart SINKS as I hear naive Christians talking about the latest Jonathan Cahn book or God blessing “Israel.” My precious brothers and sisters, please break out of your stupor and see that you are being played!

I’m only going to post part of Craig Patin’s article below. My hope is that you’ll visit Hidden in the Crag where Craig has many other important insights on the significant events taking place in Israel.

Hidden in the Crag | Malki Tzadik: the real story by C.A. Patin


This paper and commentary will be on going. Check back as it is updated.

This is going to be a commentary on some of the things that Mr. Drossos aka Malki Tzadik has done in the past few weeks leading up to and after the sacrifice he performed on the Mount of Olives. This particular blood covenant or Ba’alberith was done on the southern point of Olivet known historically as Mount of Corruption. I am going to post videos and links of interviews with this guy below.

This man is not only deceived by a false spirit, he is deceiving others. This is a very dangerous scenario we are dealing with. Dr. Pidgeon even went so far to claim that this was the abomination of desolation in the holy place that Jesus spoke of. I find that interesting because this is what the premise of my book The Temple, The Abomination and The Holy Place was based off of. The only difference was that my book was focused on the red heifer as this abomination. Dr. Pidgeon is into something but I believe this abomination happens next year with the burning of the red heifer and this blood covenant with the lamb or goat (I still can’t get a honest answer), is in fact connected to the daily being taken away. This sacrifice sacrifice Malki and the Sanhedrin was around 10:30 am, around the time of the historical daily in the temple. The daily now is done They through prayer at the western wall. This sacrifice trumped the prayer of davening. 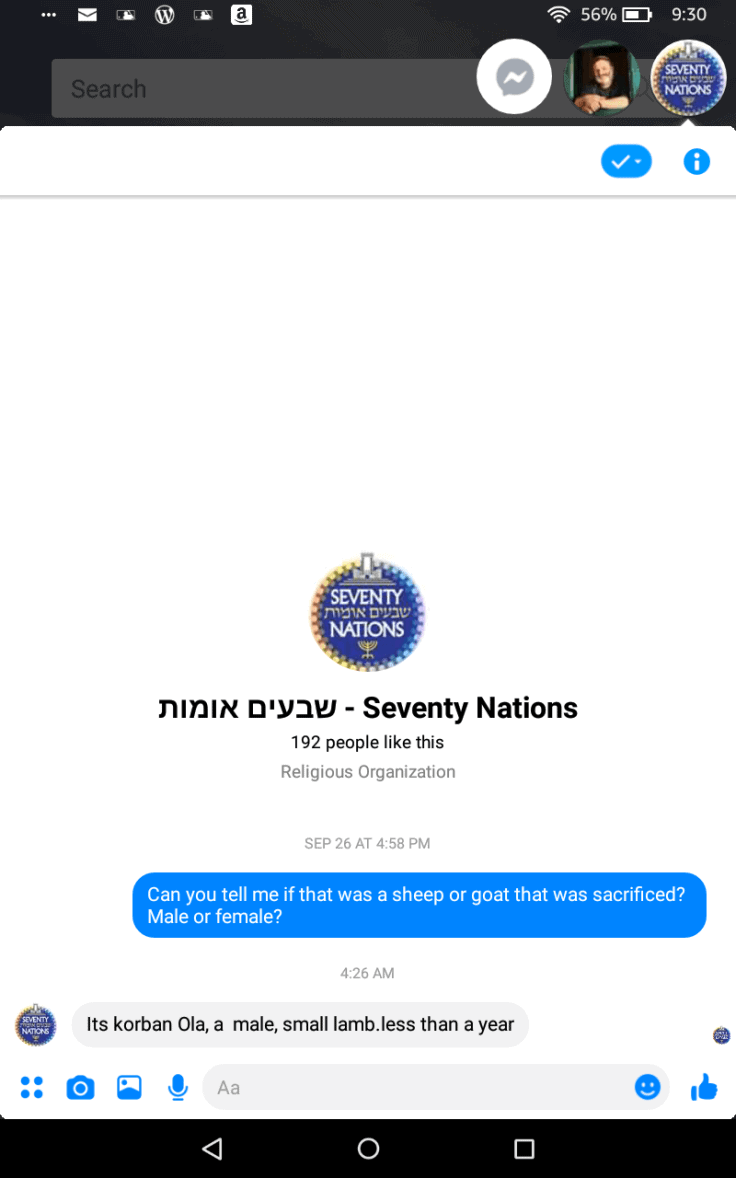 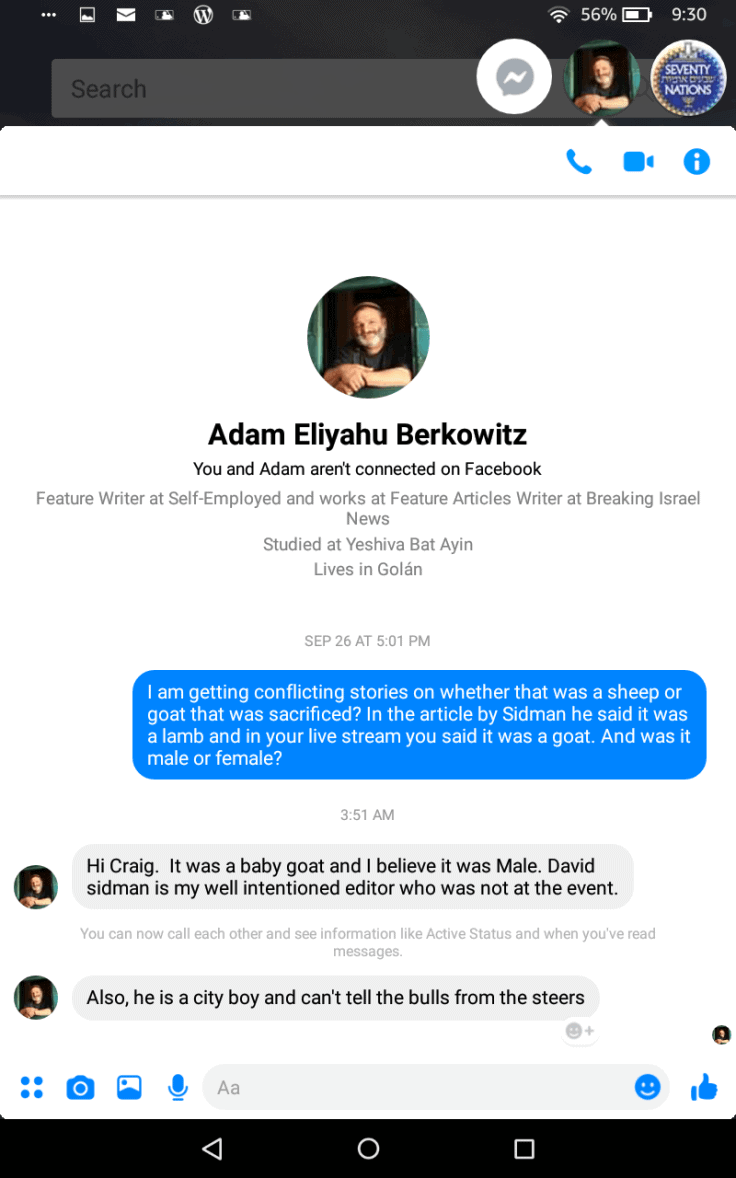 In short, this man who did these sacrifices is a Kabbalist “Christian” Hebrew Roots believer who believes that the holy spirit is connected to the chakras that house the “light” and then we become a menorah as was Josephs coat of many colors. The rainbow colors are an example of all of this. In his interviews below, he makes the claim to Dr. Pidgeon that he was infact the High Priest who did this sacrifice and it was a form of judgement in Jerusalem. He believes Jeusalem is the whore (as do I) but believes he was the one who pronounced judgement as the messenger of god. This may be true but his spirit that leads him and speaks through him is not of GOD.

…read the rest on Hidden in the Crag…