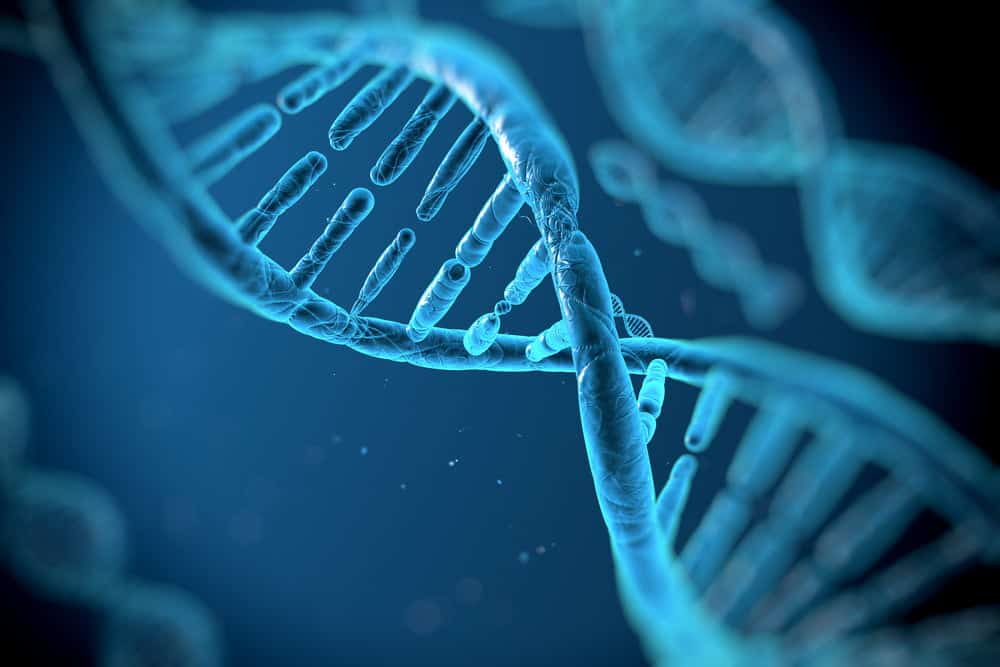 In part 1 of this series we talked about how the occult uses symbols to represent spiritual ideas / egragores, and we looked in particular at the symbol of the Phoenix.

Egragore (also spelled egregor; from French égrégore, from Ancient Greek egrḗgoros ‘wakeful’) is an occult concept representing a distinct non-physical entity that arises from a collective group of people. Historically, the concept referred to angelic beings, or watchers, and the specific rituals and practices associated with them, namely within Enochian traditions. (Wikipedia)

They say a picture is worth a thousand words. In fact, it’s been proven that our brains process visual signs much faster than textual information. So, symbols have much more power than words to create a perception. Is it any wonder that the occult’s “language” is symbols?

Could this be why God forbid man from creating any graven image?

Our Father has given us everything we need to know about life in this world, including insight into how our enemy works. In his letter to the Ephesians, Paul wrote that

…you were dead in the trespasses and sins in which you once walked, following the course of this world following the prince of the power of the air, the spirit that is now at work in the sons of disobedience— among whom we all once lived in the passions of our flesh, carrying out the desires of the body and the mind, and were by nature children of wrath, like the rest of mankind. (Eph 2:1-3)

“air” (aēr) -“to breathe unconsciously,” signifying the “the ruler of the powers in the air, i.e. the devil, the prince of the demons that… fill the realm of the air” (G109)

“The course of this world” then, can be understood as the zeitgeist / egragore / or spirit of the times; the supernatural force that delegates influence on life in this realm. The god of this world accomplishes this by steering perceptions.

The power of symbols to create perceptions is well known in the business world and is used in branding. Marketing experts knowing that to create support of a product they first need to create a “buzz;” a desired shift in perception.

The battleground is truly the mind, which is why we’re exhorted to “take every thought captive to the obedience of Christ.” (1 Cor 10:5)

Let’s consider Science in light of this. But first, let’s establish some definitions:

True Science is the observation of the creation and use of the scientific method to prove out theories about how things work.

Naturalistic Science, which came into being in the early twentieth century, is also known as Scientific Philosophy or Naturalism, since it blends True Science with Philosophy. Naturalistic Science is based on the theory of evolution and presupposes that empirical reality is all that exists.

Theoretical Science is an outgrowth of Naturalism and is based in mathematical formulas and theories. Theoretical science is ultimately about manipulating reality (natural law, laws of motion, etc.,) through quantum exploration, which is nothing but an intellectually appealing repackaging of the occult practice of alchemy. 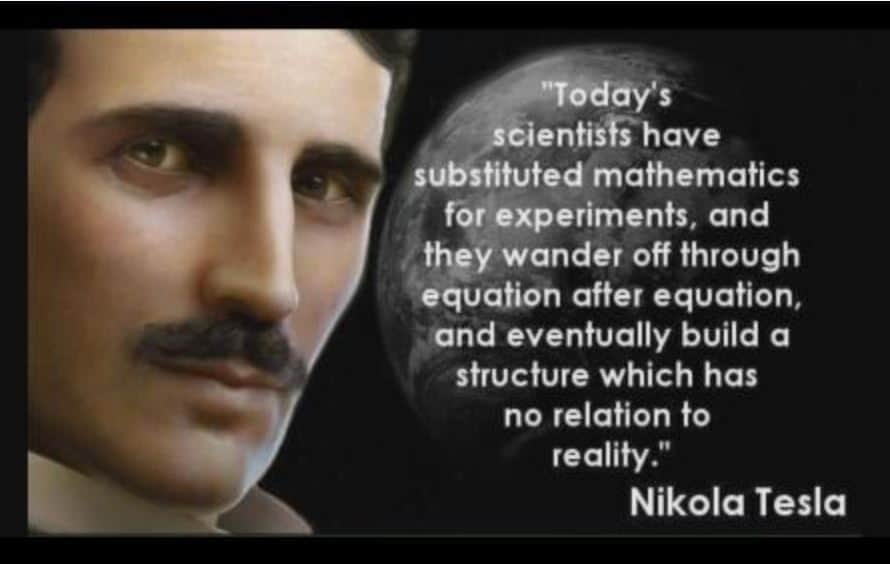 In our society, particularly in our schools of higher education, Naturalistic/Theoretical Science, or Scientism (science falsely so called – 1 Tim 6:20) demands to be viewed as the know-all and the end-all. It has set itself up as the creator, hence the definer of allowable “reality.”

With that as a backdrop, let’s look at the symbol associated with DNA:

We have seen this image (the double helix) so often associated with DNA that when we hear “DNA,” some version of it comes to mind. But this symbol is far from being unique to modern science. 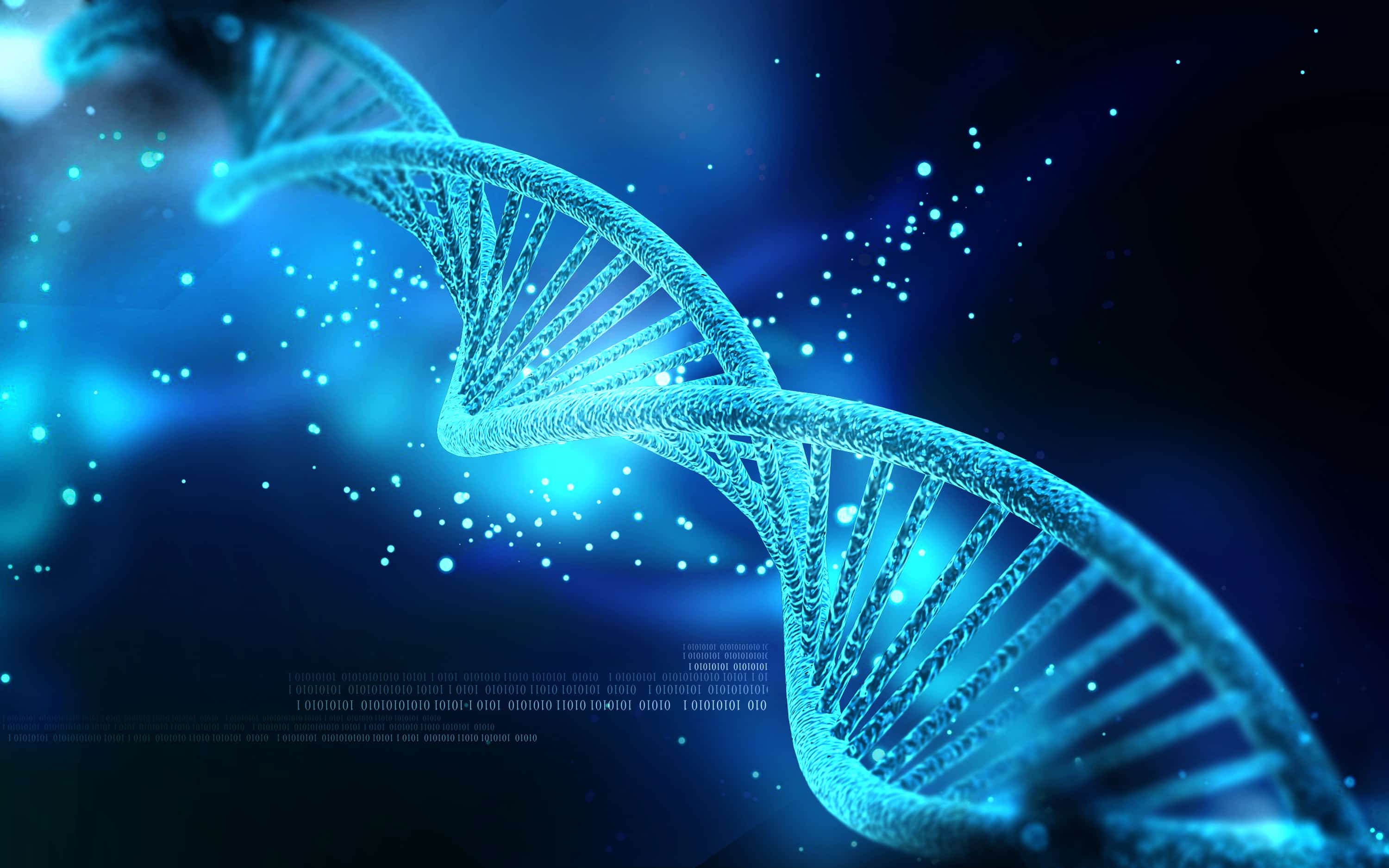 In fact, the double helix is clearly recognizable as the two intertwined serpents in the tree of Kabbalah which also appear on the Caduceus: the staff carried by Hermes Trismegistus in ancient Greek mythology. But it actually goes back much further to the Babylonians and the Egyptians as well as other ancient cultures. 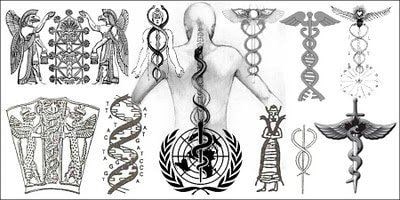 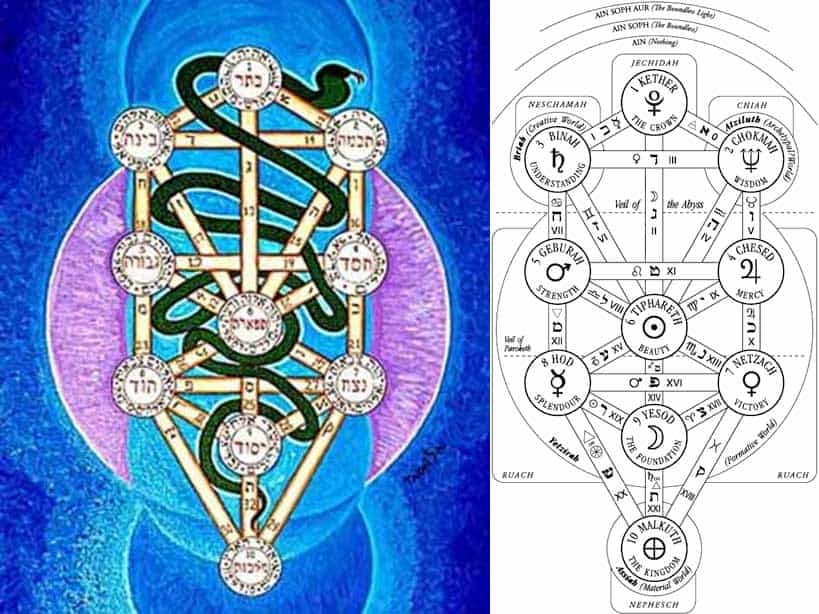 One Psychologist/ Consciousness teacher explains on his blog that the twin / intertwined serpents are the two Kundalini serpents, which:

“…reflect the complementary aspects of the divinity, out of which all things flow.

… Central in this symbolism is the notion of energy… It may refer to the Ultimate as the transcendent source of all life, to life in general, to the life force of an specific being, to respiration, to air, and to the life organs. It is the creative force that underlies and pervades all being… an invisible force that moves and empowers cosmic life.”

He goes on to say

“That this energy should be represented in two of its aspects by two snakes is not surprising, since the primary divinity involved in this ritual process is also depicted as a snake, that is, Kundalini…. it is believed to possess the powers of healing and immortality. Shedding its skin, the snake appears to undergo rebirth. (bold added) source

Occultists contend that the serpent represents knowledge, truth and wisdom rather than evil.

Kabbalah Rabbis teach that the serpent is the prophesied Messiah of Judaism.

“…the celebrated rabbi known throughout the Jewish religious world as the “Gaon of Vilna.” taught of the Kabbalah’s doctrine that inside Judaism’s vaunted Tree of Life there resides a great and Sacred Serpent whose masculine name is Leviathan and whose feminine name is Malkut. It is this Sacred Serpent, the Kabbalah teaches, that in the coming Messianic age shall rise from the abyss to conquer the Gentiles and exalt God’s Chosen, the Jews. This Leviathan, the holy and piercing serpent, is the expected Messiah prophesied to appear, the one who will supernaturally possess the bodies of the world’s Jews and lead them to global domination and glory.”

Daily Kabbalah Lesson of the Zohar, stresses that:

The Serpent is the Angel of Help.”

“in messianic times and beyond, it (the Serpent) will be redeemed and revealed in all its glory and awesomeness.” (Rabbi Joel David Bakst, “Journey to the Center of the Torah: The Secret in the Serpent’s Belly,” 2007, www.chazonhatorah.org) – Texxe Marrs (bold added)

The Christian will recognize the lie of the serpent in the garden and recall our King’s words to the Pharisees.

For God knows that when you eat of it your eyes will be opened, and you will be like God, knowing good and evil. (Gen 3:5)

Ye serpents, ye generation of vipers, how can ye escape the damnation of hell? (Matt 23:33)

Occult knowledge, portrayed by the double helix/ Caduceus of Hermes, represents the serpent’s / god of this world’s (2 Cor 4:4) offer of a worldly life apart from the true and only life source that is God the creator. Man would be his own “god,” govern his own affairs without answering to a creator outside of himself, achieve his own immortality with the help of a mystical “life force.” In this way, men in ancient cultures, guided along by demonic entities, resurrected the Mystery School teachings of the pre-flood world with its temporal aspirations.

The LORD saw that the wickedness of man was great in the earth, and that every intention of the thoughts of his heart was only evil continually. And the LORD regretted that he had made man on the earth, and it grieved him to his heart. So the LORD said, “I will blot out man whom I have created from the face of the land, man and animals and creeping things and birds of the heavens, for I am sorry that I have made them.” (Gen 6:5-7)

Our society sees itself as “technologically and intellectually advanced,” “enlightened,” but if we were somehow able to travel into the future and examine the ruins of the 2021 world, we would uncover the same symbols that have been found in civilizations since the earliest times.

The Double Helix Symbol has been emblazoned into our perception by the official keepers of allowable truth (Scientists / our Universities) as the structure of DNA; the very essence of our being. Many who have recognized the double helix in the carvings of ancient civilizations have wondered if the ancients knew about DNA — rather than dare to question the claims of Science.

How do scientists know what DNA looks like? We’ll get to that in PART 3