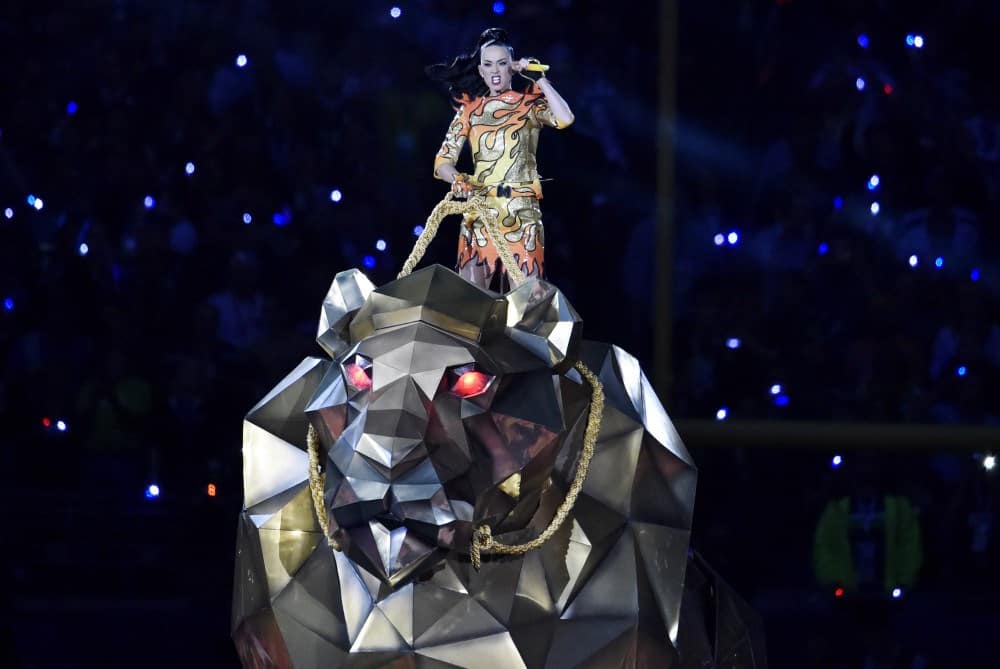 The current political landscape is in direct correlation to supernatural events that happened, in some cases, millennia ago.
L. A. Marzulli

A woman rides the beast?

The Katy Perry Super Bowl Half-time show, began with a giant UFO, a Mother-ship, sucking everything up into it.  Here’s the link (above) if you haven’t seen the ad yet.

Was the Pepsi ad hype, good PR, a way to grab everyone’s attention?  Or was it something more?  Was it a signal to those who wait the coming of ET?  Is there a group of people who know about the reality of the ongoing UFO presence and could this be the coming great deceptionwhich will lead to the New World Order, the one world government prophesied in our Bibles?

The UFO then landed and became the stadium and then, in the center of the “ship,” we saw the Pepsi logo on the stadium floor.

Enter Katy Perry, who wore a dress “engulfed in flames,” and rode a “beast”, with glowing red eyes.  Was this a cloaked reference to Revelation?  Are we looking at the “whore of Babylon.”

3 Then the angel carried me away in the Spirit into a wilderness. There I saw a woman sitting on a scarlet beast that was covered with blasphemous names and had seven heads and ten horns. 4 The woman was dressed in purple and scarlet, and was glittering with gold, precious stones and pearls. She held a golden cup in her hand, filled with abominable things and the filth of her adulteries. 5 The name written on her forehead was a mystery:

the mother of prostitutes

and of the abominations of the earth.  (Revelation 17) 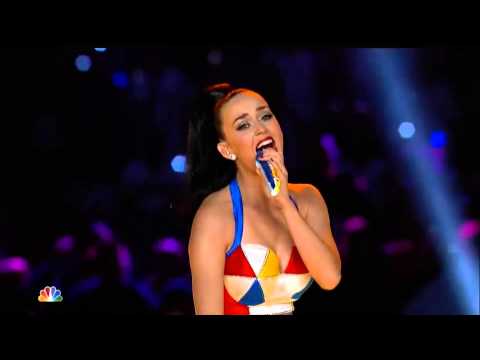 At the end of the Roar song, the lion she is riding on, rears up on its hind legs while Perry roars, but what we hear is the roar of an animal, not Perry’s voice.  It is superimposed.  Is this just fun and games or does it in fact reflect the beast within?

Directly after the song a checker-board floor was revealed and Katy Perry appears in the middle of it, still in her flaming dress.  Is this illuminati symbolism?  Don’t they consider us pawns in their game?  The chess board then morphed into something else, a gateway, a portal into another dimension?  Perry is singing about magic, and if one chooses to dabble in magic they are playing with fire.  If look you closely the chess board becomes the illuminati’s all-seeing eye.

Perry is then joined by Lenny Kravitz and they sing I kissed a Girl.  Perry kneels in front of Kravitz and at one point does a very explicit sex act.

She sings, It felt so wrong, it felt so right.  Think about this lyric and how it is poisoning the minds of young women everywhere as it promotes lesbianism.

She then performs two more songs which I believe are designed to relax the audience and have them drop their guard, before being joined by Missy Elliot whose lyrics are very sexually explicit and I am not going to print them here.

For the finale she becomes a bright and shinning star, as she floats above the stadium floor singing Firework.

I am reminded that: Satan can come as an angel of light… Is there a connection here?

In closing todays post.  Perry’s performance wasn’t perhaps as dark as Madonna’s or Beyoncé’s but it still had references to the Illuminati’s all-seeing eye, lesbianism, the woman who rides the beast, explicit sex acts, the revealing of the extraterrestrial presence, and lyrics that you wouldn’t say out loud to your son or daughter.  The question is this, was the halftime show entertainment or something else…. you decide.

Posted by lamarzulli on February 1, 2015

Something wicked this way comes….

And for this cause God shall send them strong delusion, that they should believe a lie: 2 Thessalonians 2:11

Today is Super Bowl Sunday. Millions of people around the world will gather and party-down and watch the game.  Then, at half time, Katy Perry will “entertain” us.  This is the subject of this Sunday Bun.

We are living in a post-Christian world.  When I was a boy and started school, some 59 years ago, the ten commandments were still hanging in the hallways, prayer was still allowed, and millions of babies were safe in the wombs of their mothers.

Now, 60 million babies have been aborted and over 1 Billion world-wide.  There is no prayer in the schools and if someone even mentions God at graduation, they face charges and lawsuits.  The homosexual agenda is being forced down our throats and taught to our children as an acceptable life-style.  As Christians we can not accept gay marriage, or the gay lifestyle.  While we are to love those who struggle in this area, we must discern between what the Bible teaches and the any-thing-goes morality that is now part of our culture.

Our movies, televisions and radios ooze out a steady stream of occult laced themes.  Witchcraft is cool—think Harry Potter here—and ouija boards are back and kids are using them.  This is a gateway to the demonic.

Enter the world of Pop music.  When I show Katy Perry’s ET video, much of the audience is shocked by what they see.  In the video her character appears first as the classic ET alien, then shape-shifts to a human, then at the very end we see that she is actually a chimera, half human from the waist up and a fawn from the waist down.

I would posit that this is very deliberate and in fact is an echo of what we read about in Genesis 6, and also in The book of Enoch.  The angels sinned against the animal kingdom….

When Madonna and Beyonce gave their half-time shows at the super bowl, it was an occult event.  When Katy Perry sang at the Grammy’s it was a blatant occult event.

What I believe we will see this half-time show—and I hope I’m wrong—is an open worship of the Fallen Cherub, Lucifer.

For the millions of people who watch the upcoming spectacle it will seem like harmless entertainment, as they munch on chips and wash it down with their favorite beverage.  However, what is really going on, is a Luciferian initiation and unless a person deliberately rebukes it and casts it down, they are giving it permission to enter their minds and souls.

In closing todays Bun.  There is a dark agenda.  The Prince of the Power of the Air, the Prince of this world, has set his plan in motion and it is to ensure the hearts and minds of the people of the earth.  Take a good look at Madonna, who is dressed as a Babylonian priestess.  This was at the Superbowl.

So today, if you watch the game, when the half-time show begins, stay in prayer.  Pray against it and keep your eyes and ears open.  I’ll be reporting on it tomorrow on the BLOG.

The ruler of this world is alive and well,  however, Yashua/Jesus came to destroy the works of the devil and so greater is He that is in us than he that is in the world.

Finally, be strong in the Lord and in his mighty power. 11 Put on the full armor of God, so that you can take your stand against the devil’s schemes. 12 For our struggle is not against flesh and blood, but against the rulers, against the authorities, against the powers of this dark world and against the spiritual forces of evil in the heavenly realms. Ephesians 6.