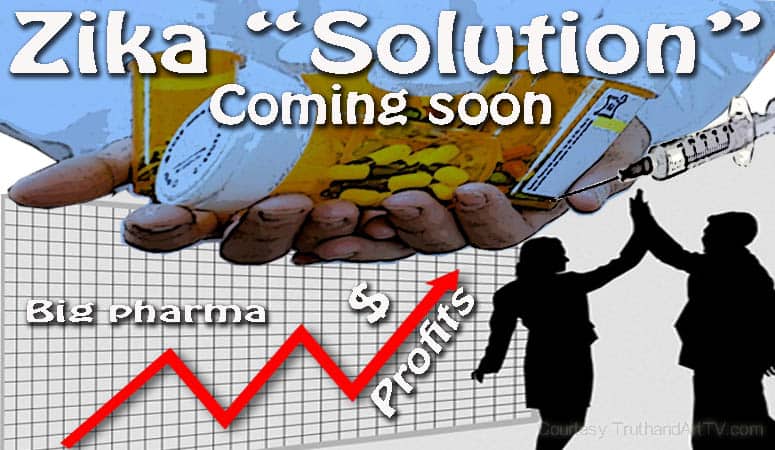 The long established entirely benign Zika virus turned suddenly deadly by Western mainstream media in 2015 has been morphing in its alleged characteristics at ISIS-like speeds. The virus suddenly was claimed to cause microcephaly in Brazil in 2015. And when that was debunked by doctors in Brazilwho exposed the pesticide-newborn malformation connection the media, the WHO, the UN and the politicians involved in this psychological operation decided to ignore the reality and the evidence and falsely continued to claim that Zika virus causes microcephaly when they know damn well it does not and never has.

Not letting facts, reason and logic get in the way, the Zika virus apparently took matters into its own hands and then magically started doing more things it had never done; it became a “sexually transmitted” disease before our eyes and packed its bags and started conveniently traveling the world like a seasoned traveler on vacation recently arriving in Florida and now triggering what will soon be an avalanche of profits for the pharmaceutical industry as their “researchers” work overtime to get the money flow going.

Incidentally, notice there seems to be a pattern between WHERE the virus travels and the desired profit-based “solution” outcome. For example, if Zika had only parked itself in a remote country or island not heard by most then the profits would not have been that easy to come by. It knew to get on a plane and (like ISIS) arrive in none other than the United States where the propaganda can be easily ratcheted up and converted to instant profits.

That said, the time to celebrate the money flow is much closer according to mainstream media who is now reporting that a team of researchers “inch closer to Zika treatment.” Is anyone who is aware of the ruling elite’s Hegelian Dialectic model for implementing mass “solutions” (which always involve mass profits and mass completion of their agendas, in this case depopulation as well) surprised by any of this?

A team of researchers may have taken the first steps towards creating a treatment for Zika infections.

Hengli Tang, a biological science professor at the Florida State University College of Arts and Science, worked with scientists from Johns Hopkins University and the National Institute of Health on repositioning drugs already approved or undergoing clinical trials.

The team identified nine compounds or medicinal mixtures, that appear to stop the Zika virus from killing fetal brain cells and from reproducing.

The findings were published Monday in Nature Medicine.

With the “solution” so much closer to reality they then go on to reiterate the lies about Zika virus that made it the money-maker it will soon become. The following remarkable points are highlighted in bold. The first point is – notice how despite the virus being well known to the medical community for almost 70 years all the claims regarding Zika virus are recently acquired, occurring in JUST the past couple of years. Think to yourself, how is that scientifically explained from a evolutionary, biological reality-based, evidence-based point of view?? The other point (marked in bold) is, notice how the researcher when directly quoted downplays the supposed connection between Zika and microcephaly almost suggesting it’s hardly there. Remember this is a paid troll for the establishment speaking. Also notice the urgency placed on this non-problem (think money and profit):

Little is known about Zika, a mosquito-borne disease first discovered in 1947. The virus can lead to catastrophic birth defects including microcephaly- incomplete brain development.

It was first reported in the Americas in Brazil in 2014 and has since spread to the United States.

Florida reported its first case in February, and as of Monday, the state has documented 588 residents with infections, including 75 pregnant women.

“The probability of Zika-induced microcephaly occurring doesn’t appear to be that high, but when it does, the damage is horrible,” Tang said.

“In this sort of global health emergency, we don’t have time,” said Song. “In this way, we hope to create a therapy much more quickly.”

Of the 6,000 compounds tested, one already on the market showed the ability to inhibit the infection from spreading and reproducing.

One of the identified compounds, is found in the drug Nicolsamide, which has been used for 50 years to treat tapeworm. When applied to the Zika strand that infected Puerto Rico in 2015, it appeared to stop the virus in its tracks.

And with that the urgency is artificially created to create the “solution” to the non-problem to quickly pack the big pharmaceutical industry bank accounts with lots of money as soon as possible. No clear-cut scientifically and medically verifiable stories and images of people dying from Zika virus is required here. No concrete medical records, no evidence-based independent studies required or a true explanation of how a simple Arbovirus could suddenly completely alter its known characteristics (its benign characteristics clearly outlined in medical text books worldwide until recently) and suddenly transmit and infect humans in a vastly different way without any medical-scientific explanation.

The deep medical reality that everyone has to see here is that if Zika virus causes “sexually transmitted microcephaly” now, then it would have done so not only in 1947 when it was officially patented (by the Rockefeller Foundation) and eventually identified but it would have done so hundreds even thousands of years ago when it was around then, too, even if the cause was not confirmed. As I’ve stated before, this idea that viruses suddenly transmit from one vector to a brand new vector it has never used before is far more fictional and inconsistent with nature than most readers can appreciate.

And as the authorities prepare to blast the Miami Dolphins sports fans and the innocent Miami citizens with deadly pesticides every time the Dolphins have a home game, it’s amazing to see the globalist corporate machinery prepare to make money from this evil psychological operation imposed on humanity in just the past year or so.

How you can resist

One of the few ways you can resist this psychological operation is to turn the media off and truly exercise your medical freedom. If and when a doctor tries to force Zika virus unnecessary medications on you or your child simply refuse until he or she shows you the evidence-based science behind Zika virus which they’ll never be able to do. This underscores the importance of doing your own research and educating yourself on this topic. Ask your doctor about the direct proven connection between pesticides and birth defects and challenge them on their silence of this. Then ask them how can mass pesticide spraying not lead to birth defects and ask your doctor to show you the studies that prove exposure to pesticides don’t cause birth defects. In other words, with this new brand of medical tyranny based on mainstream media propaganda lies it’s time to take control of your own health and to do what is best for you and your loved ones.

The other thing everyone can do after researching this topic for themselves is to share this information with those you care about so that they can take measures to protect their families FROM big pharma and government medical tyranny.