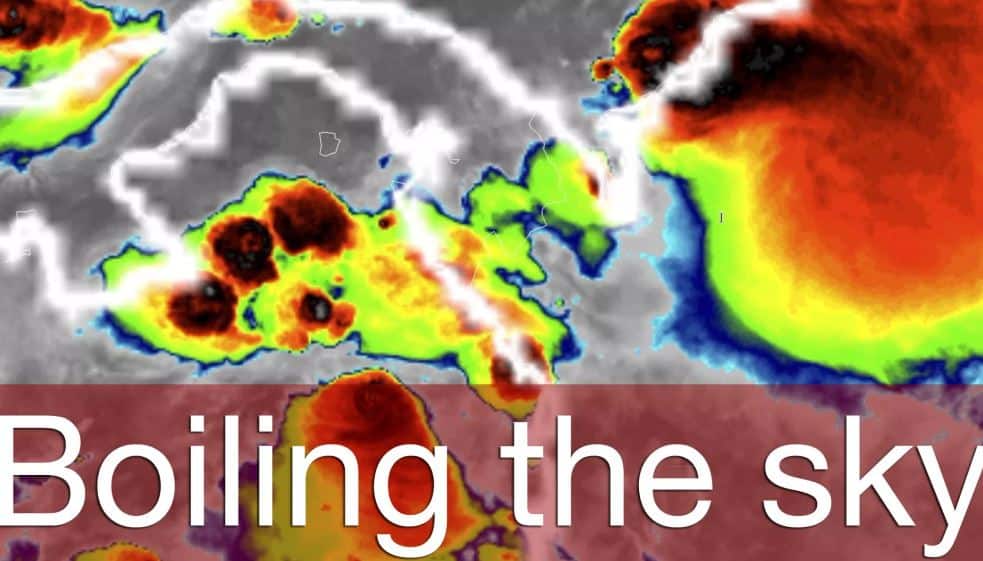 Our skies are being boiled with massive amounts of directed energy, superheating the atmosphere beyond 100º Celsius and forming massive plumes of steam all across the globe, satellite images proved today.

After investigating giant, fast expanding stem plumes west of Chicago in recent days, I looked at the GOES-16 geostationary satellite’s infrared band and it showed large areas of the atmosphere being brought to boiling point and creating the steam plumes – including midwinter Antarctica where the atmosphere was heated up beyond 70º celsius at night.

These were found west of Chicago, across upper South America, Mexico, the Gulf and across the Pacific.

The Himawara geostationary satellite showed similar activity on the other side of the globe, across Asia.

The amount of energy required to superheat this volume of the atmosphere is almost inconceivable – more than can be carried on a fixed wing platform, such as a 747.

I speculate that the energy source is ground based and being reflected back down to Earth, either by being bounced off the ionosphere or from space based reflectors.

Another theory I’m considering is that the existing energy in the Earth system is being leveraged using Tesla technology – drawing power from the upper atmosphere down to Earth, in the same way lightning works.

Terawatt lasers could direct that energy.

But since I haven’t been read into these programs, I can’t say exactly how they’re implemented. All I’m showing is proof the sky is being boiled.