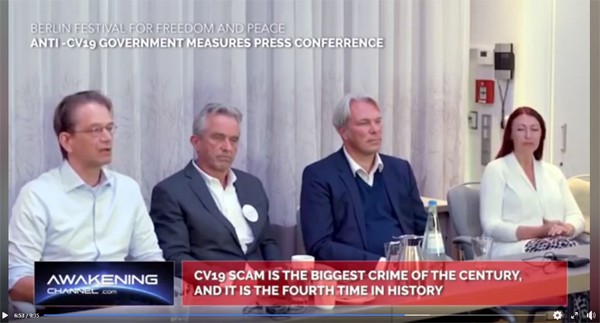 For those who have had it to the gills with this ridiculous mask-querade ball, here is something to share with doubting friends & family members. The cat is out of the bag. And as proud as they are of their uniform of self-righteousness, the diaper-faced dupes can no longer count themselves among the thinking public.

F. KENNEDY JR. DOCTORS, PROFESSORS, LAWYERS CLAIM THAT CVI9 SCAM IS THE BIGGEST CRIME OF THE CENTURY AND IT IS THE FOURTH TIME IN HISTORY.

Additionally, Jon Rappaport has been following the case of an Ohio lawyer who is taking on a case for a set of plaintiffs, against Ohio Governor Mike DeWine and the state of Ohio for his unconstitutional lockdowns, travel restrictions and privacy rights of the public and the devastation of the economy.

Here is the impressive opening in the court filing:

“In recent months, entire states have been imprisoned without due process and with the clear threat to impose such lockdowns again, interstate travel has been severely restricted, privacy rights have been devastated, numerous business takings without compensation, and many regulations being implemented without statutory process requirements under the guise of a health emergency that is roughly as dangerous as a seasonal influenza outbreak. The plaintiffs in this case have all been injured in various capacities by these unconstitutional actions, and without action by the Court, will be left without redress. More terrifying, without action by the Court, the Court will be setting future precedent that will allow states to withhold fundamental Constitutional rights, in violation of US Supreme Court precedent, circumventing the various levels of scrutiny applied to such rights, and justify such actions under public health emergency orders without subjecting those orders to any real review—just trust the bureaucrats because they are the experts.”

Rappoport continued his coverage of case:

I’ve been covering the decision in the Pennsylvania COVID case and the court filing in Ohio. They give us the templates for potential victories in other states and countries.

In Pennsylvania (ruling), a federal judge just ruled that Governor Wolf’s COVID containment measures are unconstitutional. The judge went further. NO emergency cancels the Constitution. There is a line that cannot be crossed. The right to assemble, to have freedom of movement, to earn a living—they can’t be wiped off the board by lockdowns for ANY reason.

This is, indeed, a heroic ruling. It affirms the unmistakable rays of light emanating from the basis of the American Republic.

In Tom Renz’s gigantic Ohio filing against Governor Mike DeWine, both the Constitution and issues of fact/science are asserted. Facts mean something. A declaration of emergency must undergo scrutiny, to determine whether a clear and present danger justifies the declaration.

Otherwise, a government can destroy the Constitution, the rule of law, and human rights by falsely claiming danger when there is none. We would be back in the time of Royal Edict, with the king’s army as the “rationale.”

So, even though we won’t hear a peep about this on the 6 o’clock news, it would appear that the jig is up. But unfortunately the world is so far down the road in this transformation that, IMHO, all this is going to amount to is more chaos. More rebellion. More division. An uprising for which they have a ready solution which was the game plan all along.

In other news, Breaking News Israel continues on as if the COVID ridiculousness is real, reporting rabbis talking about a second lockdown in Israel.

“In April Israel went on lockdown the night before Passover. This was an inverted enactment of the original Passover where they were to lock themselves in their homes as the Angel of Death passed over them. ” – read more about this in Craig Patin’s article here

The coming Jewish year 5781 that starts on the 18th of September and they are planning another strict 14 day lockdown of 9 million people. 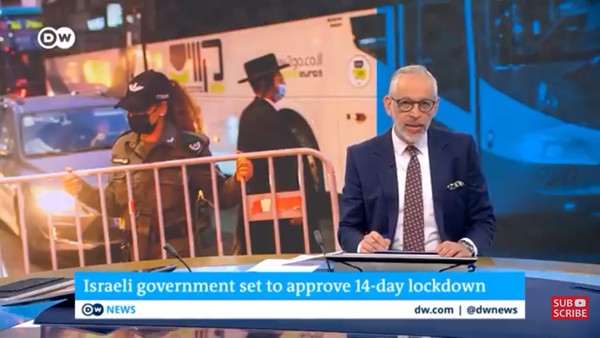 It’s unfathomable to me how people continue to blindly follow the public narrative.

“Exposure to true information does not matter anymore. A person who is demoralized is unable to assess true information. The facts tell nothing to him. Even if I shower him with information, with authentic proof, with documents, with pictures … even if I take him by force to the Soviet Union and show him concentration camp, he will refuse to believe it until he is going to receive a kick in his fat bottom…”

2 – On a deeper, spiritual level, as people pridefully lean on their own understanding, giving themselves over to the lie, this is the prophesied “strong delusion”. (2 Thess. 2:9-11)

9 The coming of the lawless one is by the activity of Satan with all power and false signs and wonders, 10 and with all wicked deception for those who are perishing, because they refused to love the truth and so be saved. 11 Therefore God sends them a strong delusion, so that they may believe what is false, 12 in order that all may be condemned who did not believe the truth but had pleasure in unrighteousness.

I think the time to wake people up is fast drawing to a close and that soon, if not already, only those who are alive in Christ, have the Spirit of Christ and are walking in His Spirit will be able to see the truth. Partial, earthly “Truth” such as expert testimony, without THE SAVING TRUTH of the gospel of Jesus Christ will only move people from the camp of the “asleep” to that of the partially “woke”.

May God fill you with his peace, joy, strength and hope.