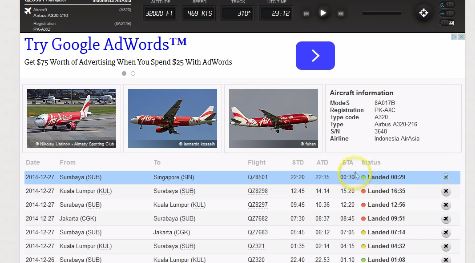 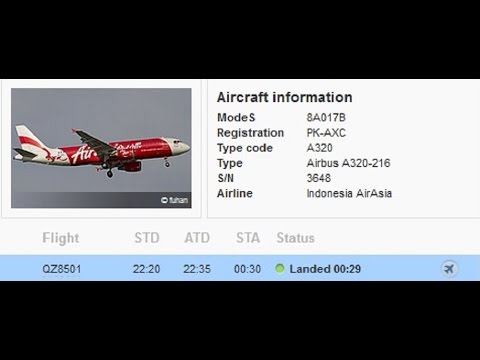 The “missing” Air Asia plane shows as LANDED in Singapore at about 730am on the 28th (or 00:30GMT)
All times shown in this video are GMT (standard universal time)

Thus, this plane on FlightRADAR is indeed the plane in question, so why does it show as landed one MINUTE EARLY on the 28th?????

It is for sure listing the flight track for the plane on 12.27 as the MISSING plane… sure it operates other days under the same 8501 number, but for some reason flightradar shows this plane as “landed” on 12.27.

FlightTRACKER has the same flight deleted… which is contradictory.. because if the plane travels every day, then it should show on 12.27 on flightTRACKER.

Therefore, flightTRACKER has been edited, or censored in some way, deleting the actual flight on 12.27, and replacing it with NOTHING.. instead we’ve got people using flightTRACKER to debunk flightRADAR .. but flightRADAR has the ACTUAL TRACK of the plane listed as 12.27 ..

Do we have a conspiracy? Well… now… now that they’re editing sites and screwing up.. and bots are running with the data to put out this fire, then I’d say YES.. it is a conspiracy.. a group of people working together to accomplish a secret goal.

Happens all the time, especially with missing planes from Malaysia which happens 3 times in 6 months.