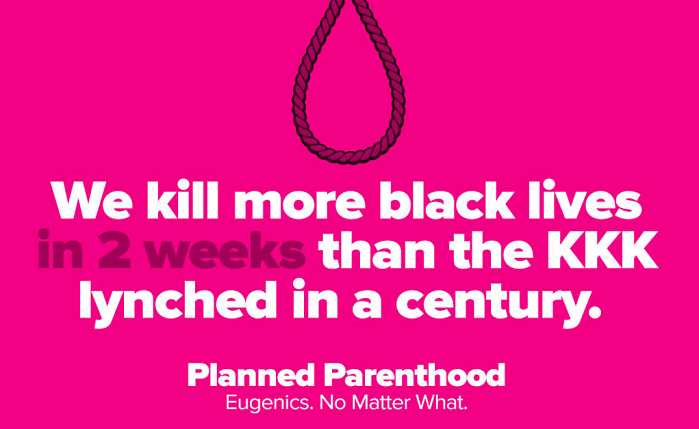 The claim is factually true, but Instagram doesn’t like truth when it reveals the murder rate of Planned Parenthood. Here’s the full story via the Christian Post:

Ryan Bomberger, black co-founder of the pro-life Radiance Foundation who was conceived during the rape of his mother, is defending a controversial meme he created blasting abortion giant Planned Parenthood as worse than the KKK after Instagram said it encourages violence.

“While writing this article, we were censored by Deities of Diversity. Apparently, Instagram deleted our post, threatening to restrict or disable our account if we violate their guidelines again. But … we didn’t violate any guidelines,” Bomberger wrote in his defense of the meme Friday.

“The explanation they included in the warning were about threatening violence. Of course the meme wasn’t threatening violence–it denounced racial violence, no matter the era. But Titans of Tolerance have no interest in the truth. They can delete our posts, and even our account, but they can’t delete the truth. And of course, there was no due process, no appeal process, no one to reach to correct this injustice. There was no option other than to click OK and the purge was complete. #Liberalism,” he noted.

The controversy over the meme was sparked last Thursday after writer Ayana Lage called out California megachurch Bethel Redding’s worship pastor, Brian Johnson on Twitter, for sharing Bomberger’s meme on Instagram. Brian Johnson deleted the post after it was pointed out as insensitive but what happened after that encounter kept the story running.

“He deletes the post and eventually his entire Instagram account after pushback, but remarks in private conversation that ‘…many of them live with a victim mentality and that is difficult to handle when you’re trying to work with them.’ Them in this case is black people,” Lage shared.

Bethel Redding’s senior pastor and Brian Johnson’s father, Bill Johnson, later reposted the meme Lage called “offensive” while noting it was created by a black man. Other Bethel leaders including Kris Vallotton insisted that Brian has a right to speak about the issue of the effects of abortion on the black community because he adopted a black baby.

In his defense of his meme on Friday, Bomberger said the intent of the graphic was to bring awareness to the ravages of abortion on the black community while highlighting the connection between Planned Parenthood’s founder, Margaret Sanger and the KKK.

“The meme juxtaposes the vile, racist and elitist worldview of those in white coats who unapologetically set out to control the population with the same racism that drove the murderous acts of a bunch of cowards in white sheets,” Bomberger said.

“If people want to be offended by anything, be offended by a worldview that denies that we’re all created equal and justifies the slaughter of the weakest among us. Be offended that women are told by a billion-dollar abortion industry that they’re not stronger than their circumstances (Phil 4:13). Be offended that religious leaders (here, here and here) are blessing abortion mills as ‘holy ground’ and ‘sacred work’,” he continued. “…But don’t be offended because you simply don’t know what you don’t know.”

In an extended statement on the meme controversy, Bill Johnson further argued that there was no intent to offend anyone with the meme and it was simply an effort to highlight the grim reality of abortion and its effect on black America.

“I and everyone I know is rightfully outraged at the KKK; embarrassed that it is a part of American history. Anyone who reacts to me, or the meme because they think it’s an effort to lessen our disgust towards this disaster is rightfully angered,” he said.

“The KKK caused unimaginable pain and destruction to some of our nation’s greatest. But the intent of the meme was quite different, whether or not you agree with the method. The hangings of the KKK were public — an unforgettable act of hatred, evil, and cruelty at the highest possible level — targeting blacks. Abortion is done behind closed doors — targeting the unborn, including a great number of blacks. Perhaps if the pain and the torture of abortions were broadcast on reality TV the public would find it as disgusting as the KKK. And that was and is the point,” he ended.