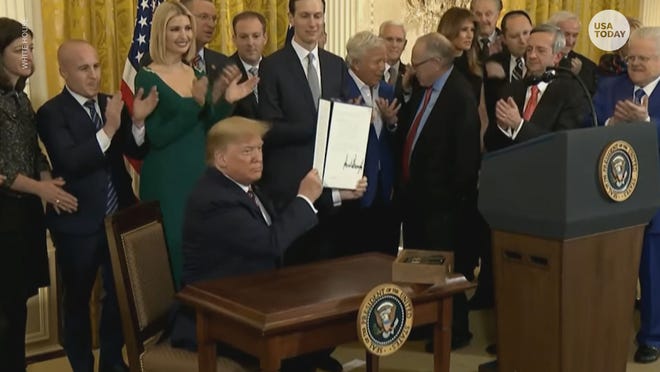 Trump declared Judaism to be a NATIONALITY, not a religion or set of beliefs….which makes ANY AND ALL criticism of the nation of Israel or the ruling elite globalists who run the nation AND any person who practices the mystical, sorcery, Kabbalah based RELIGION that worships Lucifer as a race of people.

This means freedom of speech regarding their crimes, bloodshed, wickedness and plans for the goyim (gentiles, you and me) is strictly forbidden as ANTI-SEMITISM!

THESE ARE NOT A RACE OF PEOPLE….this would be the same as declaring Roman Catholics or Baptists as a race of people, not those who follow a religion. Trump BELONGS to these globalists. They are the ones who bailed him out of multiple bankruptcies and they call the shots on every single thing he does.

This is part of a much bigger plan that has been in play since the beginning. I realize that this won’t make much sense to the vast majority of people, especially Christians because Zionism has so permeated our churches that they are blinded to these truths. We are not talking God’s chosen people here, we are talking about those mentioned in Revelations 2:9 & 3:9…those who are pretending to be Jooz.

I have been studying this for a couple years. I wish I could convey the seriousness of this move and give you the big picture, but everybody needs to study this for themselves. Trump is NOT our Cyrus, he is a pawn of globalist elites who will murder the Christians in cold blood just like the bible tells us. If you don’t understand, do a search for “noahide” and start reading.