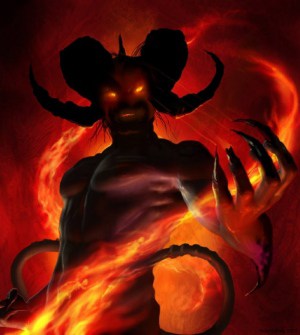 It’s hard to find a true atheist. Most who claim to be atheists are actually agnostics. Atheists believe that God doesn’t exist, while agnostics simply are honest enough to say that they don’t know.

Atheists/agnotics make up about 5.7% of the population which demonstrates that most people believe in some form of higher power. But the thing that is most enlightening to me is that most American CHRISTIANS do not believe in the Devil. You read that right. George Barna reports that nearly 60% of all American Christians do NOT believe the Devil is real.

No wonder evil is kicking our tails here in America. How can you engage and defeat an enemy that you don’t even acknowledge exists? When did so many Americans become atheistic in regards to the Devil? How is it possible to believe in the God of the Bible but not believe in the Devil of the Bible?

We could debate all day as to whether or not America is a Christian nation, but there is very little disagreement that Christianity was the belief system upon which America was founded. It has only been since the mid 20th century that the idea of the “separation between the church and the state” has taken root amongst the populace. As a result, the de-Christianization of our “public fool system” has produced consecutive generations of Americans who were taught that one’s religious beliefs were to be compartmentalized. “Private” religious beliefs, our children and grand-children have been instructed, have no place in the public square. “Keeping one’s faith to oneself” has caused a mass secularization of the culture and has crowned Humanism the official religion of America.

We have been convinced that our schools are “religion free” when, in fact, Humanism has become the official religion of the public schools. “I will be like God!” The impact of this leaven on Christian kids has been a watered-down, social gospel based on tolerance and acceptance of sin. Very few churches teach the “full counsel of God” anymore.

The Devil, Satan, is real. Most people don’t believe that. Today most Americans believe that evil is something that happens only to individuals and usually perpetrated by some “deranged” person. But, for the most part, Americans no longer believe in evil as a force, driven by the king of the real “evil” empire. We are blind to the “invisible world” that surrounds this natural world…the spirit world where angels and demons actually do battle. Where demonic forces attack and counterfeit everything good.

And what is it they do battle over? The kingdom of darkness and the Kingdom of Light are fighting for control of this “natural” world. Because of our rejection of this truth, the Christian Church has yielded “dominion” to the Prince of Darkness. It is these demonic forces that influence individuals to engage in self-destructive behaviors by “legalizing” lawlessness.

How else can you explain the cavalier attitude shown by most Americans in response to Planned Parenthood’s selling of used baby parts like your local auto-salvage yard or the sanctioning of homosexuals by the Boy Scouts? How could any Christian ever vote for a President who told us he would support baby-murder? Be not deceived…

The Devil is real and he is controlling much of what goes on in this nation. Unfortunately, Christians have been taught that this assault on the believer is personal and that evil forces are only interested in destroying the life of the individual believer. Most of the problems that the average person deals with are self-induced. The demons influence the mind which results in poor decision making. That is why today we are calling good evil and evil good.

The Devil has bigger issues on his plate than just the lives of people—he wants control of the world. If he can control the world he will also gain control of the individual. Look around. Can’t you see how evil is flourishing in this nation? Have you noticed how hard they fight to keep the truth in the closet?

“The church” used to fight evil because we understood the need to obey the directives of the Scriptures which instructed us to:

“Moreover thou shalt provide out of all the people able men, such as fear God, men of truth, hating covetousness; and place such over them, to be rulers of thousands, and rulers of hundreds, rulers of fifties, and rulers of tens:” Ex. 18:21.

Our leaders are evil, folks. We have placed into office men who have yielded to the influence of the Prince of the Power of the Air. They have seized our government and are doing Satan’s bidding. Freedom is disappearing. The Spirit of the Lord brings freedom. The spirit of the Evil One brings bondage. Which spirit is ruling over America today?

The Devil only has one weapon in his arsenal and that is deception. He is known as the “father of lies” and his “children” are trained in the same techniques. The only effective response to deception is truth. Fighting lies with lies will never lead us to the Truth.

Jesus is THE TRUTH, and the Scriptures teach us that only the Truth can make us free. The Devil is a liar. He doesn’t just tell lies; he is the Father of them. The only thing that can destroy a lie is Truth.

Sometimes it is not what we believe that matters but what we don’t believe. The Devil has convinced us that he doesn’t exist and has told us that there is no Truth.

That, my friends, is the greatest deception of all.