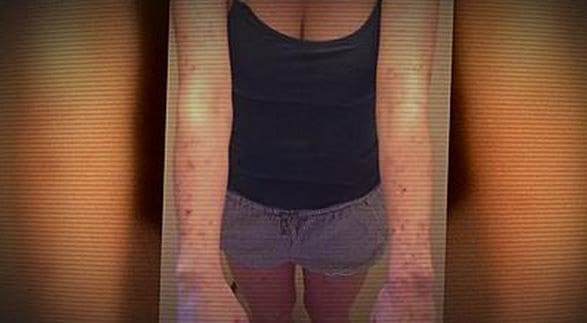 HARTLAND – It’s not often Jennifer Miller gets out of the house these days.

For months, she has been on a strange ride. Concerned, scared and now nearly paralyzed by something strange happening to her skin.
“It is insane. I can’t explain it,” she said. “All I know is it’s been debilitating and it’s getting worse.”
Over those months, Miller has seen doctor after doctor. Tests and biopsies of the rashes came back negative. Creams and lotions did nothing.
So she set out on her own search for answers and believes she has found one.
Jennifer is convinced her symptoms match up with that of a controversial illness called Morgellons.
“It fit,” she said. “Every single thing fit.”
It is a problem so controversial, medicine does not know what to make of it.
Even the Centers for Disease Control admitted it has no idea.
After studying people with Morgellons symptoms, researchers wrote “we were not able to conclude… whether this represents a new condition or delusional infestation.”
Dr. Ray Stricker has done his own research, and the San Francisco medical doctor has more than 100 patients with the same symptoms as Jennifer.
“At some point the CDC will start paying attention and then we’ll maybe make some progress,” Stricker said.
In addition to the rash, photos from Morgellons websites show the dark threads curling out of the body. What they are remains up for debate, but Jennifer believes this is her problem.
“The first thing I noticed was the pictures,” she said. “That’s me. That is me. That could be every part of my body that they’re showing right now.”
Still, doctors like Ray Stricker remain in the minority. Morgellons is not recognized by most experts and the medical professionals who have treated Jennifer suggest she seek mental help.
Something Dr. Stricker says is understandable, but not the right treatment for her symptoms.
“This is not a delusional illness, this is a disease that can make people seem kind of crazy because if you had weird fibers coming out of your skin you would probably get a little bit crazy too,” Stricker said.