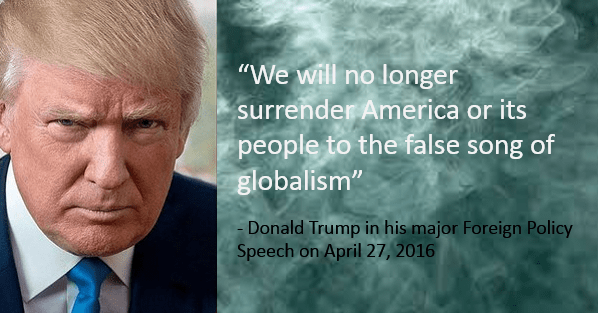 At this point, people who are still holding out hope that Donald Trump is going to drain the swamp and save America are delusional. In less than 100 days, Trump has taken America to the precipice of World War III. He has filled his administration with Goldman Sachs banksters, CFR globalists, New World Order Zionists, and warmongers. Trump refuses to prosecute Hillary Clinton for egregious crimes against our country, but he is vowing to prosecute Julian Assange, a man whose “crime” is publishing the truth he receives from whistleblowers about the criminal conduct of the U.S. government. Plus, Assange isn’t even an American. He is an Australian. What jurisdictional authority does President Trump have to arrest and prosecute a citizen of another country who has committed no crime in the United States? None! And if all of that is not bad enough, Donald Trump killed more innocent men, women, and children last month than Syria, Iran, North Korea, Russia, and China combined.

Law Of War? Civilian Deaths In US Strikes In Syria, Iraq Soar Under Trump

At some point, the people who thought that Donald Trump was an outsider and “anti-establishment”–and the ones who continue to sacrifice their principles defending him in the forlorn hope that they are going to ride his coattails to glory–will be forced to awaken to the stark reality that either Donald Trump was totally disingenuous from the beginning or he has already capitulated to the swamp creatures ensconced in Washington, D.C. Either way, there is absolutely no hope in Donald Trump. And neither is there any hope in Washington, D.C.

Washington, D.C., is totally and thoroughly corrupt. It is run by bloodthirsty, conscienceless subhumans who will stop at nothing until they bring Armageddon upon the entire world. DC is nothing more than a coven of perverted, putrid, parasitic, pathetic, pompous, pretentious, prideful, pathological purveyors of global pestilence.

The truth is, Trump started drowning in the swamp even before he was inaugurated. Most of the people in his administration could have been picked by ANY of the other neocon Republican presidential candidates. Right now, Washington, D.C.’s neocon warmongers are gushing all over Donald Trump.

On the Fox News Channel’s “Fox & Friends,” Senator Lindsey Graham (R-SC) recently said that on foreign policy “I am like the happiest dude in America right now. We’ve got a president and a national security team that I have been dreaming of. . . . I am all in. Keep it up, Donald.”

Ladies and gentlemen, please understand that the single issue that defines a neocon (i.e., Lindsey Graham, John McCain, Paul Ryan, Jeb Bush, Marco Rubio, G.W. Bush) and a neolib (i.e., Hillary Clinton, Chuck Schumer, Nancy Pelosi, Barack Obama, Bill Clinton, Harry Reid) is foreign policy. To the swamp creatures in Washington, D.C., everything is defined by foreign policy. Everything! These are beasts of prey. They feed on the blood and carcasses of the dead. They are enriched by war; they crave war; they promote war; they create war.

No one will ever believe the campaign rhetoric of constitutionalism and populism again. Trump has poisoned the pot. The Democrat Party is plunging further and further into radicalism, extremism, and socialism. But four years from now, people will embrace the radical leftist agenda of the Democrats over the phony constitutionalist agenda of Donald Trump. Then, watch out! Katy bar the door!

Face it: G.W. Bush gave us Barack Obama, and Donald Trump may give us…the antichrist.

From this point onward, freedomists need to “get religion.” I mean they need a revelation. They need to come to the disconcerting decision that there is NO HOPE in Washington, D.C.

There is only one course of action for freedomists: secession. The only other alternative is slavery.

And people need to understand that the spirit of secession is sweeping the globe. Currently, there are 42 separatist movements underway in Africa; 68 in Asia; 107 in Europe; 16 in North America; 18 in Oceania; and 9 in South America. That’s a total of 260 active separatist movements going on RIGHT NOW.

And the fact is, the United States is much too large and too populous to maintain liberty. Increasing population has taken government further and further away from the People. Politically speaking, the only thing that has thwarted Washington, D.C.’s total takeover of the states is the Electoral College system. But a rancid public education system, a cowardly pulpit, a corrupt news media, and runaway political correctness have brought liberty to the brink of destruction. Only the states can recapture the spirit of liberty–ONLY THE STATES! But which states is the sixty-four million dollar question. (My money’s on the Rocky Mountain states–which is one of many reasons why I was led to move here.)

At this moment, there doesn’t appear to be a single State with the understanding to recognize that a complete separation from the swamp creatures in Washington, D.C., is the only way to preserve liberty. YET! The swamp creatures have been bribing the states with federal tax dollars for the better part of a century. Many individuals have been living on the dole of the swamp creatures for much of their lives. Patriotic men and women who served in the U.S. armed forces find it difficult to believe that the Constitution that they took an oath to protect and defend doesn’t exist in Washington, D.C. But ladies and gentlemen, never mistake the love of liberty with devotion to government. They are NOT the same thing.

Remember these words? “That whenever any Form of Government becomes destructive of these ends [liberty], it is the Right of the People to alter or to abolish it, and to institute new Government. . . .” That’s from our Declaration of Independence, of course.

The Pat Buchanan Brigade, the Ron Paul Tea Party Revolution, God-fearing libertarians (there is NO liberty without God), and anti-war third parties need to start preparing NOW to elect State governors, legislators, attorney generals, mayors, councilmen, commissioners, sheriffs, etc., that love liberty enough to be willing to separate from the swamp creatures in Washington, D.C., that are swallowing us all alive.

If we start NOW, there still might be time. But trusting Donald Trump and Washington, D.C., for the next four years is a recipe for ruin.

P.S. As most readers know, after I began promoting Michael Hoffman’s outstanding book, “Judaism’s Strange Gods,” the supply quickly sold out. I am happy to report that we have just received a new shipment of this phenomenal book, and it is available for purchase NOW.

In “Judaism’s Strange Gods,” Christian scholar Michael Hoffman documents his provocative thesis that Judaism is not the religion of the Old Testament, but the newly formalized belief system of the Pharisees, which arose in Babylon with the commitment of the formerly oral “tradition of the elders” to writing, in the wake of the crucifixion of Israel’s Messiah and the destruction of the Temple.

Basing his findings on authoritative Judaic sources, Hoffman demonstrates that Judaism is a man-made religion of tradition and superstition, which represents the institutionalized nullification of Biblical law and doctrine.

Liberating the reader from the accumulated shackles of decades of misinformation, this book shows that Judaism’s god is not the God of Israel, but the strange gods of Talmud and Kabbalah, and the racial self-worship they inculcate.

Christian bookstores are packed with tomes purporting to unmask the religion of Islam, but not one slim volume will be found delving into the depravities of Orthodox Judaism. “Judaism’s Strange Gods” corrects that imbalance with its fidelity to Biblical truth and the historic witness of the Church.

*Judaism’s attack on the prophets and patriarchs

*Contents of the Babylonian Talmud

*Warrant for the murder of Gentiles

*Christians in the Talmud

If you don’t read any other book besides the Bible this year, read this book. It is must-reading! Plus, I sincerely believe that the understanding of the truths presented in this book is essential to freedom. I really do! And don’t wait to order. The original supply sold out in TEN DAYS.