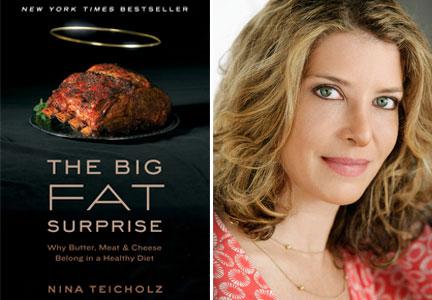 Nina Teicholz’s 2014 book The Big Fat Surprise: Why Butter, Meat & Cheese Belong in a Healthy Diet is a bestseller that continues to get kudos for its meticulous research, engaging writing and iconoclastic takedown of the 60-year war against dietary fat.

The low-fat high carb orthodoxy that has governed nutrition throughout our lives is another example of monied elites deceiving and exploiting society for profit. They create sickness that supports a two trillion dollar pharmaceutical and healthcare industry. At the same time, they suppress and intimidate truthseekers like Nina Teicholz, left, who blew the lid off the vegetable oil scam in 2014.
More proof that Western society is a satanic cult that controls and exploits its members by making them sick.

A 2003 piece on trans fats for Gourmet was a blockbuster, gaining wide circulation and garnering her a six-figure advance for a book on trans fats.

Looking back, Nina is very grateful that she spent the first three years of her research “entering in through the trans fat door, getting to know all about the vegetable oil industry.” Industry executives were very open to her.

“I had wide open access because at that point, I was just learning. I asked for people’s time and they gave it. No battle lines had yet been drawn.”

This research gave her an unique understanding about the power of the vegetable oil industry and how it had manipulated nutrition science–in particular, the “diet-heart hypothesis,” which holds that saturated fat causes heart disease. She even learned that Proctor & Gamble, the makers of Crisco Oil (a hardened oil with trans fats), helped raise millions of dollars which enabled the American Heart Association to go from a small volunteer organization to a national powerhouse.

“I got to understand the magnitude of the vegetable oil industry and how important the demonization of saturated fat was to them. How much they had influenced the science, funded the science. How powerful they were,” said Nina.

I would get off the phone and be shaking, like, I am investigating the underworld?

She soon realized she was on to a much, much bigger story — that everything we have been told about fat for more than 50 years is wrong. Some sources were too afraid to talk to her. “I would get off the phone and be shaking, like, I am investigating the underworld? As a journalist, when you realized that someone is afraid to talk to you, you know there is a big story there.”

As an accomplished journalist working on such an important topic, did she ever have a moment’s doubt that the book would be a tour de force that would shake the very foundations of nutrition science?

“Oh my goodness, it was incredibly stressful. As my conclusions became more solid, almost every night I would lie down on the floor of my husband’s study and say ‘I just can’t do this! How can I be right and everyone else be wrong? It can’t be possible.’ And then I would spend hours and hours trying to disprove myself. Is my data solid? Is there any way this could be wrong?”

A definite low in the writing process came in the first few years when her first publisher dropped the book because she hadn’t turned it in on time. Nina had to not only pay back her advance but then had to soldier on, alone without support, for almost a year before Simon and Schuster purchased the book for a much smaller advance. To support her and her two children, she relied on her husband’s income and used all the money from an inheritance from her grandmother, to enable her to continue writing a book that was taking much longer than she, or anyone, expected.

“It was a difficult time. And the longer it took, the more everybody was embarrassed to ask me, ‘Are you still writing your book?’ and I would say ‘Yes, I am still writing the book.’ There is such a fear you will never finish.”

But with her dogged focus that bordered on obsession, a supportive family, an unflagging editor and a tenacious agent, after more than nine years, the book was finally done. “My editor, agent and I called ourselves the “bulldozers of truth” — we felt we just had to get the truth out into the world.”

The result, as almost all the reviews note, is a gripping read about co-opted science, often funded by the vegetable oil industry, that led to the shunning of saturated fat for almost 50 years — and very likely contributed to the obesity and diabetes epidemics.

Her book and its resulting influence on the heated debate around nutrition has led her to be a target for critics, some who have attacked her personally with vicious name-calling and angry statements.

“What Nina Teicholz has done and continues to do is very brave and very important. The resistance she has faced and the personal attacks have truly been remarkable,”

“For example, a high-profile MD affiliated with Yale called her “shockingly unprofessional”, “an animal” and more in a Guardian article. But he failed to provide any examples of this unprofessional behavior, despite several requests from the journalist. I think many experts have been living comfortably in dogma for decades. When they get intellectually challenged by a woman, a journalist, and they fail to find any good arguments, some of them just lose it, and lash out at her. The truth is often inconvenient and uncomfortable.”

The personal attacks have been difficult, says Nina.

“On the one hand, the attacks are painful and hurtful, but at the same time, you know that if they are attacking you personally it is because they cannot attack you substantively. One has to stay above the fray and not stoop down to their level of name-calling. Their level is so low, it’s embarrassing – and it certainly doesn’t help the scientific discussion.”

Since 2004, she herself has embraced the low carb, high-fat diet. Now she relishes juicy steaks, plenty of cheese, and lots of butter — and feels at her healthiest, and effortlessly at the thinnest, of her entire life.

“Everyone who switches to this diet just marvels at how delicious all this food is that has previously been forbidden. It is an incredible liberation to not be counting calories and to live in a way where food is no longer your enemy. I really would have appreciated knowing all of this when I was a young woman when I always wanted to be thin and 10 pounds lighter.”

Is another book underway? Not at the moment. Currently, almost 100% of her time is occupied working with leading theNutrition Coalition, the non-profit organization she founded to ensure the U.S. nutrition policy, especially its influential dietary guidelines, is evidence-based. Working closely with Dr. Sarah Hallberg, who directs the Nutrition Coalition’s Scientific Council, her goal is to get the U.S. Dietary Guidelines reformed by their next iteration, in 2020.

“The Dietary Guideline imposes profound rigidities on both the medical and food systems in the U.S. We have to remove that rigidity to give doctors the freedom to prescribe different diets, including — for instance, a low carb, high-fat diet, for patients with obesity, Type 2 diabetes, or other nutrition-related diseases. There is no single, more powerful lever on the way America eats than the U.S. dietary guidelines. And that is why they need to change.”

Is she optimistic? Certainly more so now, with the community of worldwide individuals who are being brought together online.

“It is such a wonderful community of people. Everyone shares a common goal. All are so grateful for their newly-found health and wellbeing. There is a sense of purpose and a collectivity that is really a beautiful thing. I think we are lucky to be where we are at this moment in time.”