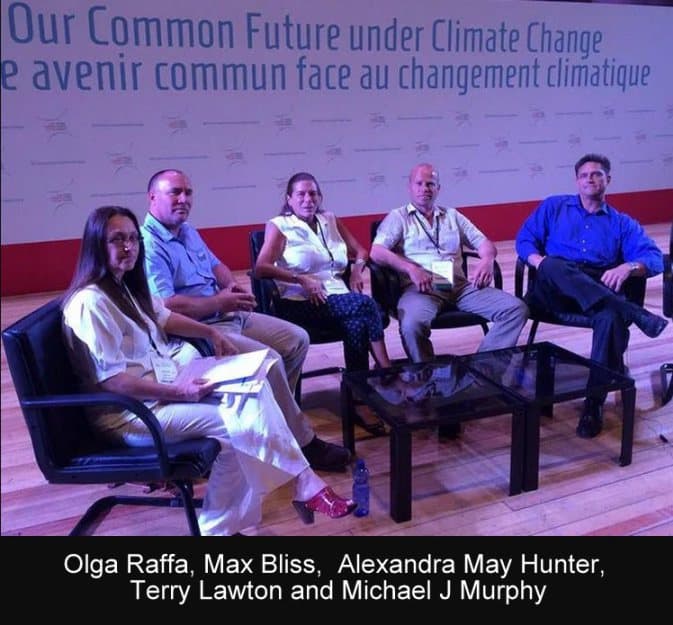 Chemtrails are not a “Conspiracy Theory”, rather, they are a Conspiracy Fact. Anyone still falling for the ridicule being assigned by the MSM to those who are courageously fighting these programs may want to consider why a panel of citizens would go through the great effort of attending the Climate Change Conference held in Paris, France and presenting the facts before a committee, who were largely in the dark about these operations. Anyone ridiculing these people after the intense research they have done at personal cost, reputation, and career, has simply not taken the time to look at the data.

That having been said, Alexandra May Hunter returns from the Paris Climate Change Conference with a positive report. Please glance through the well prepared Powerpoint and PDF of Alexandra’s presentation. For more factual information on chemtrails visit aircrap.org.

Alexandra May Hunter attended the Paris Climate Conference as a presenter. The title of her subject matter was, “Geoengineering: Existing State Specific Laws and the impacts upon human health, the Eco-system & Economics. An overview and analysis of currently in effect state statutes on air pollution and how any proposed geoengineering and/or climate intervention plans or programs would impact current laws, human health, the Eco-system and state economies.”

Alexandra was well received by many of conference attendees from the academic, scientific, government policy makers of varying levels, lawyers, governance, medical, biologist’s, agency personnel and researchers. Although many of these people were aware of geoengineering, many were not and this was a successful opportunity to make all of these people aware of and more informed as to the dangers of this “proposed” mitigation technique.

She would like to personally thank the 130 persons who contributed to her fund for attending the conference.  She would also like to convey most grateful thanks to her co-activists who also attended the conference; Olga Raffa, Max Bliss, Terry Lawton, Michael J Murphy and Patrick Roddie. The team did an outstanding job of conducting themselves in the most professional serious and well informed manner and were all successful in making geoengineering not only a part of the conversation but successfully influencing this group of 2200 persons.

Here is the poster created for her presentation as well as her more detailed power point presentation  (PDF click here). Alexandra shot 100 videos of the sessions she attended and she will be providing more specific detailed reports and coverage in the upcoming days and weeks.