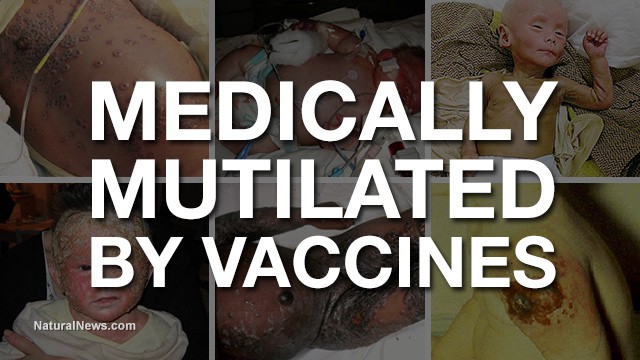 I recall years ago watching a 20/20 special about vaccines not being safe. They reported that the UK used a much less vigorous schedule than the US for immunizing infants. (They were not administering any vaccinations until a child was 2 years of age if I remember correctly.) At the time I had already allowed my children to undergo their recommended infant immunizations. So I did all I knew to do, I prayed. The report was talked about quite a bit for a while and then it seemed to just fade away like so many things we hear about in this age of information overload and programmed ‘groupthink’.

I try to avoid posting “fear based” articles as I think fear is a powerful tool of the enemy, but this critical information simply has to get into the hands of young parents who are being misinformed by the doctors they trust. (Not to vilify well meaning doctors, they are being lied to as well.)

I have a neighbor whose child was born healthy, but soon after his second dose of vaccinations developed autism. She and many other parents who’s lives have been forever altered are committed to fighting this unthinkable crime.

(NaturalNews) Much like Brian Williams, vaccine promoters are serial liars. They know vaccines harm many children (and even kill some), yet they knowingly lie to the public by falsely claiming vaccines cause no harm whatsoever. (They do this willfully, in total violation of all medical ethics and fundamental honesty with the public.)The “Big Lie” about vaccine safety is crumbling by the day, of course, causing the vaccine industry to resort to desperate tactics such as attempting to declare absolute government control over your body via a medical police state that forces you to submit to medical interventions. This will, of course, begin with forced vaccinations of unwilling people and then quickly escalate to other things that serve the interests of the medical police state such as forced organ harvesting from the bodies of all Americans. (To accomplish this, they will roll out emotionally charged campaigns of sobbing children who need kidneys, and then demonize people who don’t agree to be organ donors as being “selfish” and horrible people.)

Despite the pathetic propaganda attempts, the reality of vaccine damage tells a very different story from the one being falsely portrayed by the sellout media. As the photos below clearly show, vaccines cause horrifying medical mutilations of children again and again.

Keep this in mind the next time you see pathetic liars like Sen. Elizabeth Warren or CDC officials spouting total propaganda nonsense about vaccines being completely “safe and effective” (usually while smirking with evil grins). Watch this shocking video by Rob Dew which reveals the deeply-ingrained evil of vaccine fanatics in Washington who brazenly lie about vaccine “safety.”

WARNING: These photos are quite graphic. These children are VICTIMS of vaccine damage, and they have suffered tremendously. This is the true human cost of the vaccine lies and denials being staged by the mainstream media and CDC officials.

Many of these images are provided by the CDC itself! Although they will retract this page as soon as they can, this CDC web page depicts vaccine-damaged children.

Thus, when the CDC says vaccines are “safe and effective,” they’re knowingly lying! Proof of their big lie is published right on their own website.

A two-year-old boy devastated by a small pox vaccine. As reported by Reuters:

A two-year-old boy who developed a serious reaction to his father’s smallpox vaccination has recovered but disease detectives found infectious virus all over his house, the Centers for Disease Control and Prevention reported on Thursday. A photo of the boy’s stomach is seen in a handout photo from the University of Chicago’s Comer Children’s Hospital. A severe adverse reaction to a hepatitis vaccination: A horrifying reaction to the BCG vaccine: Another innocent victim of vaccine damage: Neurologically damaged by the DPT vaccine: A smallpox vaccine reaction that has nearly destroyed this person’s arm and shoulder: The HPV vaccine turned this normal, healthy girl into a brain-damaged victim of vaccines: THESE PHOTOS ARE ONLY A SMALL PORTION of all those showing vaccine-damaged children. CDC officials, media newscasters and U.S. lawmakers claim all these photos do not exist, that these children were never harmed, and that vaccines cannot cause such damage at all.

They are liars. Worse than liars, they are medical mutilators of innocent children who continue to be severely damaged by toxic vaccines every single day, all around the world.