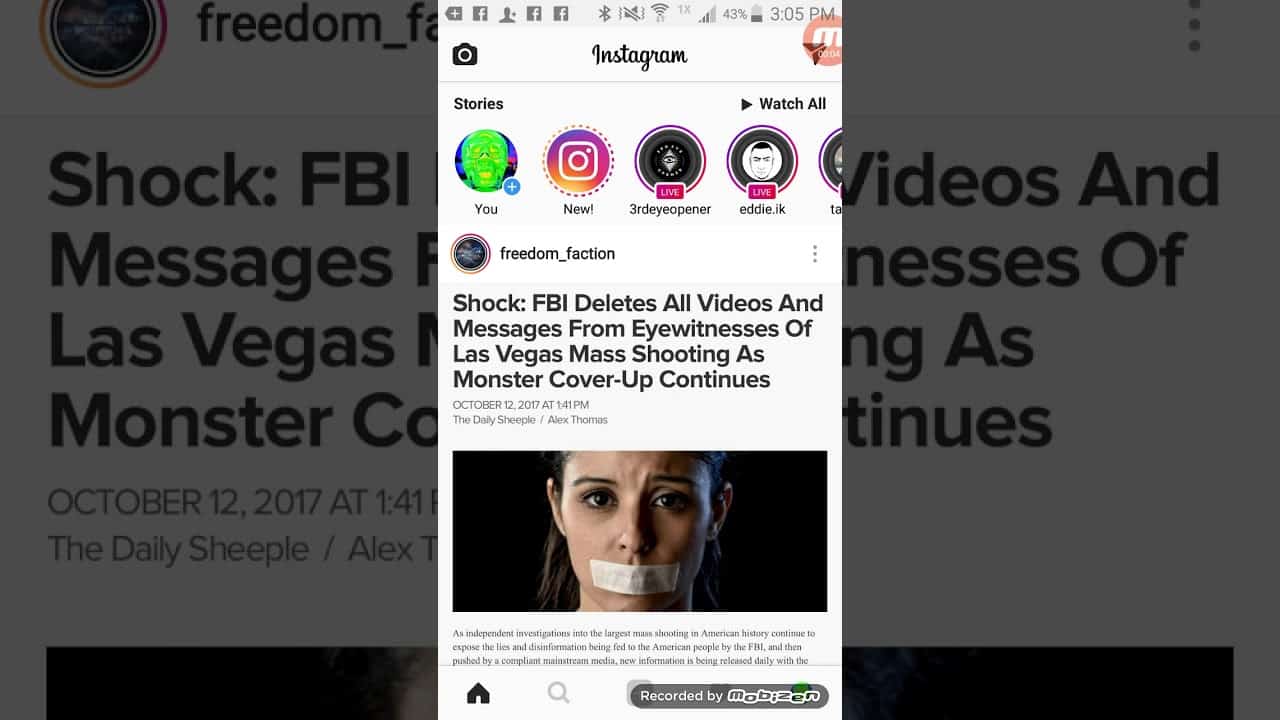 This story (below) carried by Infowars, a known disinformation site, adds to the mounting evidence that these horrible false flag events and UNnatural disasters… murders (even if no one died at the Las Vegas shooting, several people died afterward) are being exposed by the very powers that are responsible for them.

Historically, rulers have used the hegelian dialectic (problem/reaction/solution) to steer public sentiment and bring about desired change (for their own benefit, not the people’s, of course). and that’s exactly what we are seeing. Massive fear, designed to create desperation and finally a public outcry against this tyranny. And while everything we’ve held to be true is being constantly thrown into a tailspin, we find ourselves in a perpetual state of cognitive dissonance, which makes people highly vulnerable to deception. The stage is being set for us to embrace a “wondrous leader”, empowered by satan himself, who will promise peace and safety.

Judging from current events and the writings of occultists, I believe their plan involves not one but two “antichrist’s” (an “evil” one and a “savior”) and two “New World Orders” (the one that’s currently being exposed and a fake utopia). This massive deception is why it’s so important to be grounded in the Word and keep our focus on Jesus!

But with all that said, the Bible tells us not to be ignorant. 2 Cor 2:11 So, here’s more evidence that the Las Vegas shooting was a deliberate false flag event. Keep sharing the truth, praying for the families of those who were lost, and above all, we need to keep our hearts and minds on Jesus, share the gospel, rightly divide the Word of TRUTH and pray for discernment for all God’s people.

Paul Watson at infowars has the story:

“Workers at the Route 91 festival during which Stephen Paddock unleashed his massacre have reportedly been given back their phones and laptops by the FBI only to discover that all messages and videos from the night of the attack have been wiped clean.”

“According to a Las Vegas resident who posted a status update on Facebook, ‘A bunch of people that worked the Route 91 [concert] said they got their cell phones back today. They all said that all their phones are completely wiped clean! All messages and info from that weekend are completely gone. Anyone else experience this’?”

“’A few different people who were vendors there are all saying the same thing,’ the woman later comments.”

“Later in the thread, a Route 91 worker confirms the story, commenting, ‘Of course. It’s an active federal crime scene. They can wipe it clean. I was the beverage manager for the entire event. My laptop is wiped clean’.”

First of all, in a recent article, I demonstrated in detail why you can never trust what the FBI says about evidence in any investigation. There is a notorious history of the Bureau cooking and slanting and inventing data to support prosecutions.

Second, who says the FBI can take people’s phones and laptops, watch and copy the video footage, and then wipe it all away before returning the devices to their owners?

The FBI literally owns the crime scene AND any record of what happened at that scene? Baloney.

The obvious reason for wiping out the footage: it contained evidence that contradicts the official scenario. And most likely, that evidence revealed multiple shooters.

As Vegas cops, the FBI, and the owners of the Mandalay Hotel have changed and massaged the official narrative, one assertion has remained constant: there was only one shooter, and he was Stephen Paddock.

Law-enforcement pounced on that claim early on, without the slightest justification. Without interviewing multiple witnesses who state they saw other shooters.

“Okay, the mass shooting happened yesterday and we know there was only one shooter. That’s it. Don’t ask us any questions about this. Anyone who disagrees with us is spreading rumors and impeding the investigation.”

Admitting multiple shooters is admitting there was cooperation, collusion, conspiracy, a plan, and a purpose for that plan beyond “the lone gunman was crazy.” This is the door law-enforcement keeps slamming shut every time it opens.

And now we have reports that the FBI has wiped witnesses’ phones and laptops. No more footage of the shooting. No more evidence.

Let’s be clear: the FBI is impeding the investigation.

If they did, every time a journalist probes beneath the surface of a crime and uncovers important information, the FBI could say, “Well, we just opened an investigation of that very crime, and therefore we want all your notes and we want you to cease and desist your inquiry. Shut up and go cover Sunday picnics.”

In most cases, law-enforcement doesn’t have to worry about mainstream reporters. Those denizens simply take dictation from local cops and federal cops and their stories appear in papers and TV news broadcasts wiped clean of independent thought.

That leaves the truth a wide open field.

Private citizens and non-mainstream journalists own that field, not through edict, but through default. Don’t blame us. If you were doing your jobs, we wouldn’t have to do them for you.

Your first rule would be: stop lying.

Destruction of evidence is a felony. Those concert workers whose phones and laptops were wiped clean had a felony committed against them. By agents of government who have sworn to uphold and protect the Constitution.

Thousands of smart lawyers out there will say, “Come on, there’s no way you could make a charge like that stick.” Well, maybe there would be a way, if enough of you decided there has been enough destruction of the Constitution and it’s time to stand up and be counted, come hell or high water.

Meanwhile, whoever can look past the lies and fabrications and distortions of a criminal investigation can say something because they saw something.

Here is a quick excerpt from my recent piece about the FBI’s stance on crime probes. It should give you a clue about the Bureau’s attitude and reputation:

April 20, 2015, The Atlantic: “…the Washington Post made clear Saturday in an article that begins with a punch to the gut… ‘Nearly every examiner in an elite FBI forensic unit gave flawed testimony in almost all trials in which they offered evidence against criminal defendants over more than a two-decade period before 2000,’ the newspaper reported, adding that ‘the cases include those of 32 defendants sentenced to death’.”

In the Vegas shooting case, the FBI is saying: Trust us. We’re the pros. We do investigations the right way. Now give us your cell phone so we can look at video footage of the shooting and make a copy and wipe your phone clean and give it back to you.

Don’t worry, be happy. All is well. The centurions are on duty.