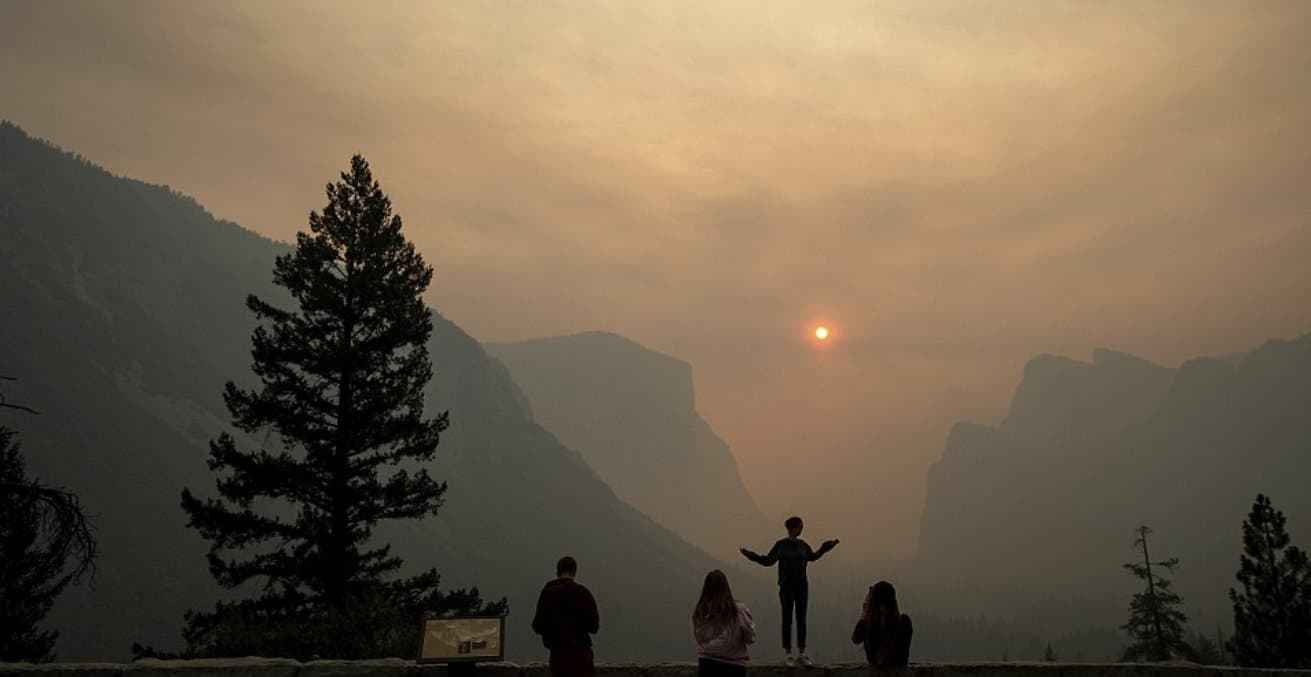 Yosemite National Park has been evacuated as firefighters desperately attempt to control enormous wildfires in a heatwave which has seen temperatures soar to 120F.

Campsites and lodges emptied out after disappointed tourists were ordered to leave the heart of Yosemite by noon Wednesday.

Firefighters are battling to contain a huge wildfire just to the west of Yosemite that has threatened the park’s forest and sent up smoke that obscured vistas of parkland.

Yosemite Valley will be closed until at least Sunday, along with a winding, mountainous, 20-mile (32-kilometer) stretch of California‘s State Route 41 that leads in, park spokesman Scott Gediman said.

At least a thousand campground and hotel bookings will be canceled – to say nothing of the impact on day visitors, park workers and small businesses along the highway, Gediman said. Rangers went to campsites one at a time to inform visitors of the closures. Hotels guests got phone calls and notes on their doors.

Francisco Avendano, visiting from Madrid, Spain, photographs Half Dome as smoke from the Ferguson Fire hangs over Yosemite National Park

Inmate firefighters battle the Ferguson fire in Jerseydale, California. The blaze has already claimed the life of one firefighter and injured two others

Trees burn in Stanislaus National Forest, near Yosemite National Park, as part of a blaze that has killed one and injured two

‘This is the prime visitor season, so this wasn’t an easy decision to make,’ Gediman said. ‘This was purely for safety’s sake.’

Officials were quick to point out that Yosemite wasn’t under imminent danger from the Ferguson Fire. Authorities decided on the closure to allow crews to perform protective measures such as burning away brush along roadways without having to deal with traffic in the park that welcomes 4 million visitors annually.

Yosemite Valley is the centerpiece of the visitor experience, offering views of landmarks such as Half Dome, Sentinel Dome, Bridal Veil Fall, El Capitan and Yosemite Falls. The glacial valley has been enveloped by a choking haze of smoke from the Ferguson Fire.

Visitors are advised to ‘limit activity during the periods of poor air quality,’ the park said in a statement. ‘Some facilities and services are closed or diminished.’

Over nearly two weeks, flames have churned through more than 57 square miles (148 square kilometers) of timber in steep terrain of the Sierra Nevada just west of the park. The fire was just 25 percent contained Tuesday.

Mandatory evacuations are in place in several communities while others have been told to get ready to leave if necessary.