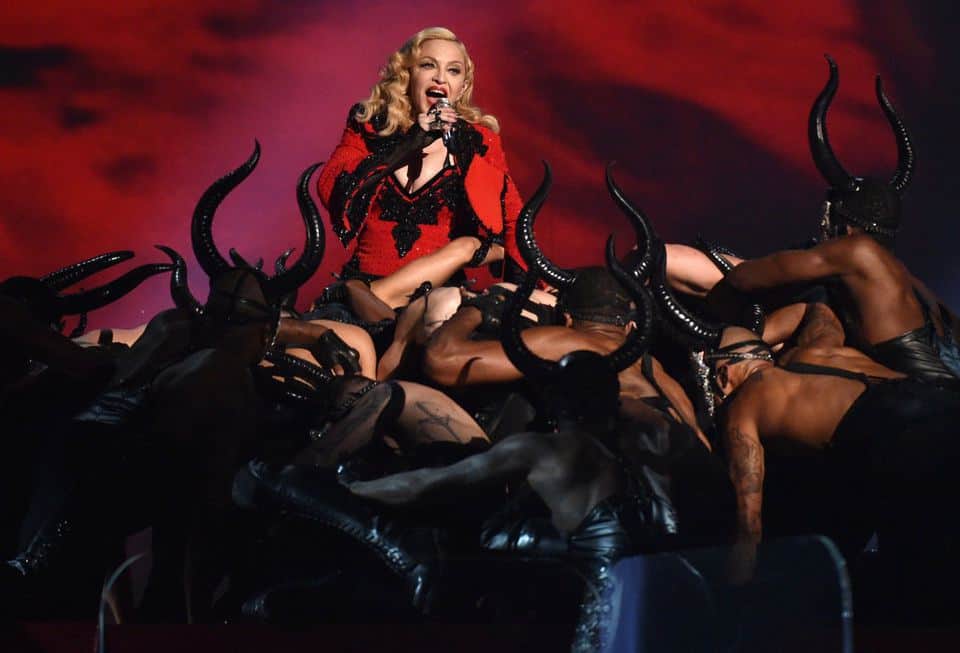 Commentary & Analysis by L. A. Marzulli

I was at the gym early yesterday having posted the Sunday Bun and in fact, I was the first person to enter.  The lights weren’t even on and no music was playing on the sound system.  I started my work out and then the music was cranked up and the song that I heard was AC/DC’s Highway to Hell. I immediately went into prayer and rebuked it.  The guy’s voice sounds like a demon singing.  I thought.  I have always hated the song even when it first came out and I wasn’t a Christian.  This happened just before 7am California time yesterday.  Now, fast forward to the 2015 Grammy’s and there was AC/DC playing Highway to Hell, live on stage.  Coincidence?  I think not.  The entire audience gleefuly sang along and gave the band a standing O. I was appalled and realized I had nothing in common with what I was seeing.

As the camera panned to the so-called musical greats, Katy Perry gave the horned-hand-salute and stuck her tongue out like a snake.  Deliberate?  You decide.

Why is she dressed like this and why is she wearing red horns?

There are interview clips on youtube where she matter-of-factly states that she sold her soul to the devil.

Again, why would she state something like this, even in jest, if it were not true?

Kanye West took the stage and performed in front of what looked like a illumined pit with smoke coming out of it.  He was dressed in a red sweat-suit, complete with hoodie.

I couldn’t understand a word he was singing and wondered about the imagery as West was blotted out most of the time by the smoke coming out of the Pit.  If this was a song about his child then why this setting?  What followed his “performance” made it very clear to me that the “pit” was another deliberate staging for what was to come out of the pit.  The pit was opened….

Horned dancers made their way down the center aisle of the theater and then Madonna made her entrance.  What followed was, in my opinion, a Luciferian spectacle, that like the super bowl performances we’ve seen in the past, as well as other Grammy shows, was an in-your-face worship of the Fallen Cherub, Satan.

The imagery is calculated.  It is deliberate.  It is an overt proclamation honoring the one these so-called musicians worship.

I have a contact inside the music industry who will remain anonymous to protect his/her identity.  This person tells me that many people have given their lives/souls to the god of this world, Satan.  This person told me of seeing shrines and seeing the aftermath of rituals that had been performed, as well as being pressured to join the club.

After her performance my wifey and I turned off the set and prayed.  This is where we are folks.  Meanwhile most of the churches won’t talk about this next Sunday.  The pastors will remain mute, it will be another Jesus-fluff day.  Your kids and grand kids are being seduced and it’s happening now.  Look at the images I’ve shown here.  Can there be any reasonable doubt as to what is going on?

We need to pray.  Pray for mercy, pray for forgiveness that we have sat by and done nothing.

In closing todays post.  The 2015 Grammys is another indication of how far down the rabbit hole we really are and is in my opinion, a Luciferian A-go-go.  Wake up….