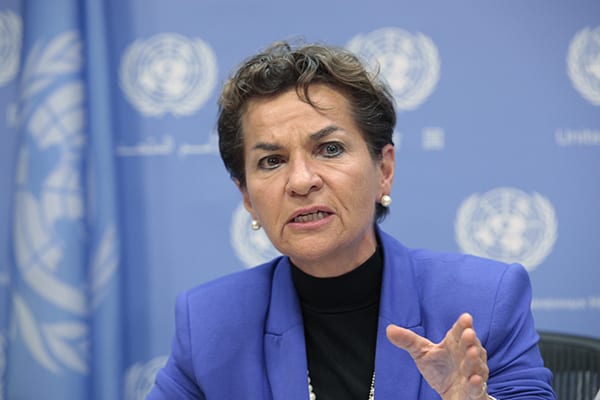 We’re continually told, by the UN and every mainstream news outlet that the ‘climate change’ (which we are assured is “settled science”) is the result of man’s horrendous effect on the environment. But at a news conference in Brussels last week , the executive secretary of the U.N.’s Framework Convention on Climate Change, Christiana Figueres, confirmed that environmental activists goals are not what they purport. Figueres said that:

“This is the first time in the history of mankind that we are setting ourselves the task of intentionally, within a defined period of time, to change the economic development model that has been reigning for at least 150 years, since the Industrial Revolution,”

In reference to a new international treaty that environmentalists hope will be adopted at the Paris climate change conference later this year, Figueres added:

“This is probably the most difficult task we have ever given ourselves, which is to intentionally transform the economic development model for the first time in human history.”

The only successful economic model in the last 150 years has been Capitalism. Capitalism, with all it’s shortcomings, has unarguably succeeded in cutting work days in half and doubling lifespans. That clearly runs contrary to the UN Sustainability Agenda.

While this is in line with President Trump’s campaign statements, moments before his inauguration, the White House website deleted all but one of Trumps references to Climate Change. The only exception being his promise to eliminate the Obama administration’s Climate Change policies. While he dismissed man-made Climate Change as a hoax, he has recently been quoted as saying he has an “open mind” on the multinational efforts to reduce ‘greenhouse gas’ emissions.

The inconsistent messages about climate change make it clear that it is nothing but a hot button to distract, confuse and divide.

“The common enemy of humanity is man.
In searching for a new enemy to unite us, we came up
with the idea that pollution, the threat of global warming,
water shortages, famine and the like would fit the bill. All these
dangers are caused by human intervention, and it is only through
changed attitudes and behavior that they can be overcome.
The real enemy then, is humanity itself.”
– Club of Rome

Climate Data from NOAA has been corrupted from the onset, one glaringly missing element being ongoing aerosol operations controlling the weather. As the flawed science behind the global warming/climate change hoax is being undermined, Figueres statements should make us wonder what’s really going on. Before we’re tempted, as with the Trump election, to break out singing “ding dong the witch is dead”,  we should keep in mind; If it’s mainstream, it’s been allowed to come out in a very specifically controlled way that suits the purposes of the social engineers.

Most people dislike hearing about the Cabalist Jewish forces behind all these things. It smacks of racism, and if you’re still under the spell of dispensationalism, it sounds downright unchristian. But the facts point to these things being exposed by the Cabalists themselves; beginning with the “Illuminati” and celebrities, to the bankers and now the environmentalists. If they have their way, (the emphasis being on “if” since only God knows the future,) the current system will come down and be replaced by their idealized, satanically-based social, political, economic and religious “New World Order”. The challenge before us as believers is not to let ourselves to be deceived, which includes the many deceptive teachings in the churches that are financially supported by the Cabalists, beginning, square one, with Zionism.

Awareness is important; ignorant people are easy to control. We should do all we can to be informed [2 Cor 2:11] and to keep ourselves healthy, both physically and spiritually. It’s important to keep sharing awareness and doing what we can to make a difference. But at the same time we need to keep in mind that no amount of protesting, in and of itself will change these things. To miss the big picture is to engage in futility. While we have a responsibility to be salt and light [Matt 5:13] in the world, our true citizenship is in heaven [Phil 3:20]. The battle always begins on our knees [Eph 6:18]. Our enemy is mammoth. But God made the mammoth. John 1:3