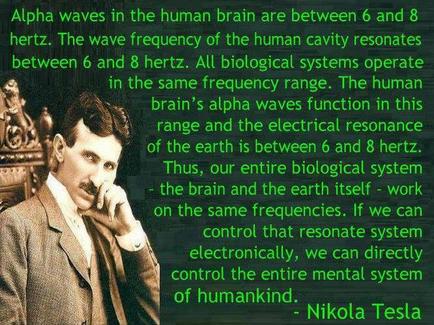 Have you noticed that everyone seems to be having trouble with their memory lately? Have you noticed it’s hard to concentrate? … And it seems like it didn’t used to be that way? I hear this all the time anymore, to the point where it’s highly unlikely that the individual cases are unrelated. Either the entire population is suffering from a mild case of alzheimers or something else is to blame. People tend to brush it off, make a joke about their bad memory and move on, but it is no joking matter. Again we hit a wall of cognitive dissonance when we try to talk about these things because the average person simply has no place to “file” this kind of information. It is unthinkable.

“The individual is handicapped by coming face-to-face with a conspiracy so monstrous he cannot believe it exists. The American mind simply has not come to a realization of the evil which has been introduced into our midst. It rejects even the assumption that human creatures could espouse a philosophy which must ultimately destroy all that is good and decent.” –  Hoover

There is evidence that our very thoughts are the target of the creators of advanced technologies such as chemtrails. Chemtrails are not merely a method of weather modification. Don’t you believe it. Combined with other technologies such as HAARP and NEXRAD, our now plasma-like atmosphere is being charged with radio frequencies, as explained below by Clifford Carnicom. These frequencies are known to affect things like human behavior, memory, mood and concentration. (see here)

The detection of sustained Extremely Low Frequency (ELF) radiation is positively confirmed. A fundamental frequency of 4 cycles per second (Hz) is established, along with the harmonics of that frequency, 8Hz, 12Hz, 16Hz, 20Hz, etc. . The indication is that this phenomenon is expected to be global in scope, due to the extreme wavelengths associated with these frequencies. This is further confirmed by the orientation of the maximum field strength in the direction of the magnetic field lines of the earth.

The detection of this radiation puts forth the foreboding prospect of many applications and implications, including those of military, biological, psychological, health, energy, weapon systems and geophysical natures. The discovery of this fundamental frequency has profound geophysical implications as the Schumann frequency, i.e, the natural resonant frequency of the earth, is itself being exceeded in wavelength.

There is no known natural source for its origin at this time.

The initial stages of this work were conducted from November 2002 to April 2003. Approximately two dozen papers outlining that research exist on this site. Extended research into the conductivity changes in our modified atmosphere has necessitated a return to this topic. The repeated detection of this radiation over a 2 1/2 year period indicates that this represents a continuous and fundamental change in the global electromagnetic environment.

As there is extensive literature and evidence on the potentially detrimental biological, psychological and health effects upon humans of this radiation type, the international community is requested to openly investigate, locate and determine the source of this energy. Should it be determined to be of artificial origin, the intent and purpose of this radiation is subject to public challenge. The use of ELF pulse energy with ionospheric heaters may serve as a starting point for this investigation.  Environmental monitoring and protection is a right of the citizen.