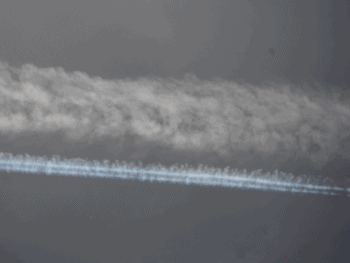 It is common knowledge that nano particulates are increasing the frequency of  wild fires, resulting in forest fires that have been burning hotter and spreading faster than ever before in the history of the USA  and other regions of the world. The EPA and other such agencies deny that the use of a metals are the cause, but fire fighters and elite e fighter crews will publicly disagree. What is the cause, and could it be that the aerial spraying known as chemtrails is the culprit, let’s examine this subject closer.


“The dangerous thing about the chemical reactions in fire is the fact that they are self-perpetuating. The heat of the flame itself keeps the fuel at the ignition temperature, so it continues to burn as long as there is fuel and oxygen around it. The flame heats any surrounding fuel so it releases gases as well. When the flame ignites the gases, the fire spreads.” [source]

Is there such a thing as a fire burning TOO HOT you may ask? Well according to the government website  NEWTON DEP , the answer is YES.

Q.  I have read that water can actually fuel a fire that is “too hot”. How is this possible, and how hot is “too hot”?

A.  This is true, though only certain types of fires get this hot. One type of fuel that can do this is magnesium. Magnesium burns at 3600 F (2000 C) and at close distance is brighter than the Sun! Paper, on the other hand, burns at a measly 454 F (220 C). Since magnesium burns so very hot, it can actually split water into hydrogen and oxygen (2 H2O –> 2 H2 + O2). Then the hydrogen and oxygen undergo combustion due to the excessive heat to form water again. While you might think that this cycle would keep going, it take an incredible amount of energy to split water into hydrogen and oxygen–more than you get back out when you reform the water. All of this heat is lost to the atmosphere and the fire will eventually burn itself out. A magnesium fire is so hot that it can burn a hole right through a car’s engine block (since the engine is made of aluminum/cast iron and melt at a lower temperature than magnesium burns). There are other examples, but this is by far the most common/popular type of metal fire that water will not work with. Another is called thermite, which is a combination of aluminum powder and iron oxide (rust)–this will burn just as hot as magnesium. Lithium, sodium and potassium are all metals that will burn and react with water as well. Potassium is so reactive with water that it has to be stored in oil because it will react with the moisture in the air. This is not true of magnesium or thermite, which have to be ignited with a very hot flame.

If you have taken any type of fire extinguisher safety courses, then you will know that there are 4 classes of extinguishers, A, B, C and D. ABC extinguishers put out most fires with carbon dioxide, while class D extinguishers put out metal fires using dry powder. How do they do this? Table salt! Believe it or not, there is powdered sodium chloride (regular table salt) that comes out of a class D extinguisher and puts out the fire by smothering it! Sodium chloride will put out most types of metal fires, though those fires containing lithium, it is preferred to use copper to extinguish the fire. There are a couple of others including sodium carbonate or graphite, but those have limited uses and drawbacks. “

Aviation and retired USAF Mark McCandlish in his address to the SHASTA COUNTY BOARD:

When  materials such as  Aluminum Oxide, Barium  and  Strontium (as a Carbonate) which are  all used in explosives or pyrotechnics are combined with Sulfur and Iron Oxide in an explosive chemical reaction, these components create tremendous heat- enough to melt through a steel support girder in a fraction of a second.

“Imagine then, how this affects the conflagration that is a forest fire with these materials present in the environment.  I have personally spoken to a number of career CDF personnel who have told me unequivocally that fires over the last ten years have become significantly more difficult and costly to suppress.  They burned unusually hot but officials were at a loss to explain “why”… Now as if that weren’t bad enough, with Aluminum being a conductor of electricity, spraying countless microscopic-sized particles into the sky does something else you might not have considered:  It dramatically increases the electrostatic potential of the air.  That is, its ability to conduct electricity.  So those storm clouds that always seem to follow heavy chemtrailing are primed to produce many more lightning strikes.  In late July of 2010, (if memory serves) one such storm produced over 8,000 lightning strikes in our region, many of which created fires.  When it was all over a month later, California had totaled over $23M in suppression costs.  And since the chemtrailing started around 1999-2000, the amount of acreage burned and suppression costs have doubled according to NOAA figures.” See: http://www.ncdc.noaa.gov/sotc/fire/2012/8

Let’s begin with a short description of Fuels, additives, and why we believe that Chemtrails are responsible for creating hotter forest  fires as well as longer burning forest fires, more destruction and doing it all with very little oxygen. If you know anything about the basics of fire, then this is no surprise. Fire needs oxygen because when we burn a material we actually induce a reaction of the material with oxygen. The energy that is released during this by this chemical reaction produces what we call FIRE. Essentially, fire is the side product of the reaction to oxygen.

“Burn” is really a term used to describe a chemical reaction known as “combustion”. A combustion process usually requires oxygen or some oxidizer. Thus, when we say we burn something, what we are really doing is allowing the combination of that substance with oxygen. This process usually means that a lot of energy is produced. The energy is usually released in the form of heat and light. This heat and light we call “fire”. thus, it is not so much that fire require oxygen, but rather that the process of combining oxygen with a substance (in a combustion process) produces heat and light (fire). “(Roberto Gregorius)

Let’s take a quick  look at the different elements that contribute to fires.

The following are 2 declassified documents regarding Jet Fuel. Keep in mind, this document was written up in 1958. This is alarming to say the least. 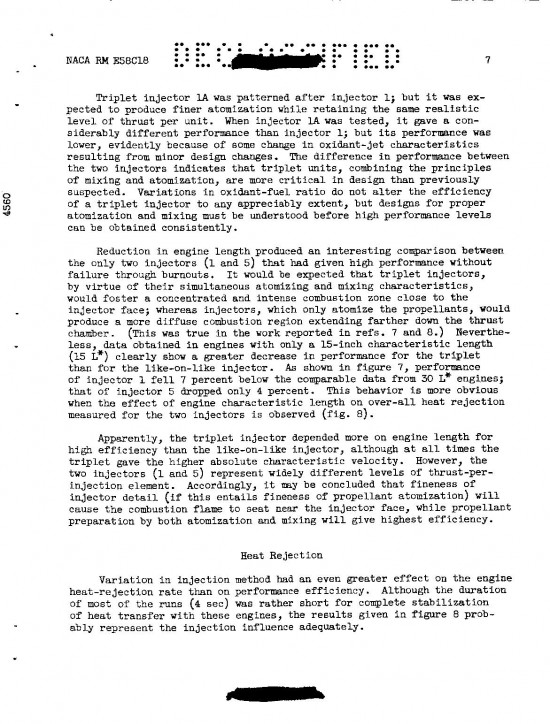 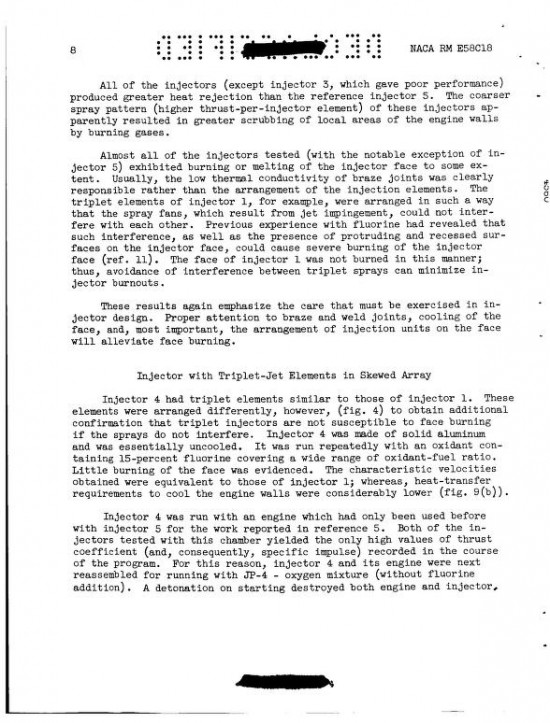 The composition by weight of Thermate-TH3 (in military use) is 68.7% thermite, 29.0% barium nitrate, 2.0% sulfur and 0.3% binder (such as PBAN). As both thermite and thermate are notoriously difficult to ignite, initiating the reaction normally requires supervision and sometimes persistent effort.Because thermate burns at higher temperatures than ordinary thermite it has useful military applications in cutting through tank armor or other hardened military vehicles or bunkers. As with thermite, thermate’s ability to burn without an external supply of oxygen renders it useful for underwater incendiary devices.

Fuel-Air Explosives [FAE] disperse an aerosol cloud of fuel which is ignited by an embedded detonator to produce an explosion. The rapidly expanding wave front due to overpressure flattens all objects within close proximity of the epicenter of the aerosol fuel cloud, and produces debilitating damage well beyond the flattened area. The main destructive force of FAE is high overpressure, useful against soft targets such as minefields, armored vehicles, aircraft parked in the open, and bunkers.

Fuel/air explosive represent the military application of the vapor cloud explosions and dust explosions accidents that have long bedeviled a variety of industries.

Recent History of  some of the largest US Fires:

Spreading through the states of Idaho and Nevada, the Murphy Complex Fire burned an estimated 653,000 acres of land in 2007. The same area was subject to another fire, which spread into Mexico, in June 2011.

Burning land in Northern and Central California, the Summer 2008 California Wildfires included over 2,780 individual fires that occurred between May 22 and August 29, 2008. Killing 23 people and destroying over 1.15 million acres of land, the fires were believed to be caused by a combination of lightning and heat.

Burning from May 29, 2011, to July 8, 2011, the Wallow Fire was named after the Bear Wallow Wilderness, where the blaze in Arizona and New Mexico started. Over 538,000 acres of land, 72 buildings and 16 people perished as a result of the fire, which was believed to have been started by an abandoned campfire. 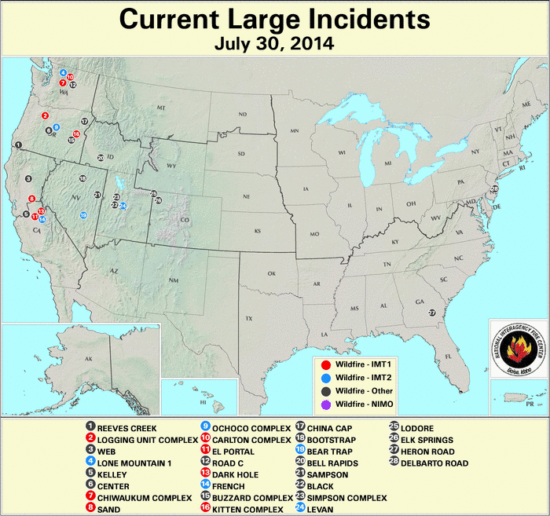