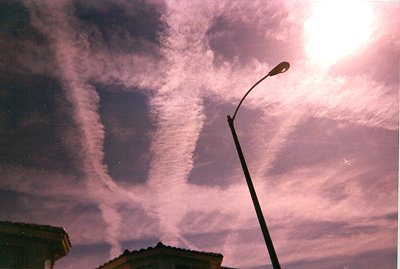 Alex Jones and David Knight have apparently decided to adopt the least-likely explanation for aerosol geoengineering – aka Chemtrails.

Infowars reporter, David Knight presents a rushed version of the events at the 2014 Geoengineering conference in Germany. (Video)

Citing a paper by Mike Hulme, Knight goes on to assume the discussion is about the chemtrails operation that is taking place now and was taking place long before the need for solar radiation management ot SAI/SAG could have been determined an “emergency” to mitigate the drastic effects of so-called “global warming”.

As global warming is increasingly revealed to be a fraud, the remaining explanation for spraying chemtrails would be to warm the climate and disrupt weather – a definition that squarely fits with what is contained in HR-2977 as “an exotic weapon”.

Investigator, Cliff Carnicom agrees that aerosols sprayed from planes are actually warming the atmosphere.  Another scientist, Joyce Penner agrees with Carnicaom that contrails and thin, high clouds tend to warm the climate.  Cliff knows the difference between the troposphere and the stratosphere.  (about 20,000 to 35,000 feet)

When geoengineering activist, Cliff Carnincom speaks, activists and reporters are obliged to listen.   Carnicom’s paper that says aerosols are aggravating global warming have been published for almost a decade.  Why would Dane Wigington and a minority of the geoengineering activist community refuse to quote Carnicom unless they were choosing to promote the IPCC agenda?

As a result of Knight’s newscast, the reports coming from the Alex Jones network become more disinformation than fact.

Why Chemtrails is Not Geoengineering as Mitigation for Global Warming

FACT: The Stratosphere does not exist below 40 thousand feet. Every mid-latitude altitude below 40,000 feet is in the Troposphere, not the Stratosphere. The Troposphere has always been the intended target for deployment of aerosols/chemtrails

DISINFO:  Chemtrails are sprayed as an effort to cool the planet against the effects of CO2, the Greenhouse gas responsible for global warming as defined by the IPCC.

FACT: All the evidence from climate scientists Cliff Carnicom and Joyce Penner conclude that artificial clouds and contrails deployed in the troposphere at 30 to 40 thousand feet tend to warm the climate – not cool the climate.  The myth of reflecting sunlight back into space by deploying aerosols as artificial clouds in the troposphere, below 40,000 feet results in a net increase in atmospheric temperatures.  Sources: Carnicom-a  Carnicom-b  Joyce Penner, TV News  Joyce Penner 1999 IPCC Aviation Report on Contrails

The term “Geoengineering” has been defined by the Royal Society as: “the deliberate large-scale manipulation of the planetary environment tocounteract anthropogenic climate change.” – The Royal Society 2009

Chemtrails is defined in HR-2977 (PDF) as an “exotic weapon” – NOT a method to “counteract anthropogenic climate change”.

Will Geoengineers like David Keith spray sulfuric acid high in the stratosphere to prevent chemtrails from melting the ice-caps?

Regardless your opinion of geoengineer, David Keith, his concept of SRM (Solar Radiation Management) orSAG (Stratospheric Aerosol Geoengineering) involves far fewer resources and would be deployed much differently than what millions of observers have been calling “chemtrails” since the mid 1990’s.

Chemtrails warm the climate as an “exotic weapon” as defined in HR-2977. Chemtrails are not to be confused with the Royal Society’s definition of geoengineering in the form of SRM or SAG to “counteract anthropogenic climate change”.


In stark contrast to what millions of observers witness as daily chemtrails spraying by hundreds of jet aircraft, David Keith’s comments on the Dec 9, 2013 Colbert Nation spoke to a limited geoengineering operation achievable by a few high performance jet aircraft delivering a total payload of only 20,000 tons of sulfurc acid (H2SO4) into the stratosphere. Keith’s proposal reveals that the scale of the covert chemtrails operation is orders of magnitude more intense in required resources, CO2 polluting aircraft, and payloads of pollution deployed into the atmosphere.

Chemtrails are not SAG or SRM

Keith suggests 20,000 tons of H2SO4 be released by jet aircraft into the stratosphere at 70,000 ft. By comparison, in excess of 200,000+ tons of chemtrails are routinely sprayed between 30 to 40,000 feet in the troposphere every day with the effect of warming the climate – an outcome that could be considered as either primary or “necessary” to the mission of weather modification. (Keith interview on Colbert Nation )

The media and government agencies admit that future emergency proposals for “geoengineering” the stratosphere to mitigate global warming are under consideration. Listen to Obama’s White House science advisor John Holdron.

The future could see two opposing aerosol operations: (1) Covert chemtrails that warms the climate and (2) Sulphuric acid as SAG/SRM to offset warming due to chemtrails.

Through years of confusion in agreeing on the definition of chemtrails vs. geoengineering, activists have incorrectly equated chemtrails with what is planned for future emergency geoengneering as SRM or SAG.

There is no research to establish effective solar radiation management when ionizing salts and metals are injected into the troposphere below 40,000 feet. Furthermore, chemtrails examined by telescopic lens are revealed in a variety of different colors from silver to a dirty brown.

Note: Of special interest in this video is (1) no normal gap between the engine and visible contrail (2) In jet #5 in sequence note the accidental release of aerosols from a compartment in the belly of the aircraft. (3) Some emissions are dingy in color and appear in the exhaust along with normal water vapor emissions that are much “brighter” in hue.

Therefore, it’s far more likely that the presence of aluminum in chemtrails is evidence of an exotic weapons program rather than an ingredient to cool the planet by reflecting sunlight back into space.

So the burning question remains:

Why do government agencies deny chemtrails while fully acknowledging the existence of future solar geoengineering programs?

Part of the answer goes back to the history of the National Weather Modification program organized by NASA in 1966.

Weather modification eventually came under the department of defense where top secret clearances of involved federal agencies became a virtual “gag order” on public disclosure due to the usual excuse of “national security”. Chemtrails and advanced electromagnetic sources are integrated to form a a global weather modification network hidden from public view . The ionospheric heater like the one at HAARP is only one example of a electromagnetic sources that integrate into a multi-layered weather modification network that has advanced to create weather and climate change on demand.

Keith’s suggests that 20,000 tons of sulfuric acid (H2SO4) would be required to geoengineer the stratosphere to protect against global warming.

Let’s use the hypothetical example of an aircraft capable of climbing to 70,000 feet in the stratosphere to release a 10 ton payload. With a one year timetable for completion, the initial seeding would require 2,000 sorties (trips) to deliver 20,000 tons of H2SO4 to the stratosphere within 12 months. This would require only six (6) aircraft deployments per day compared to the hundreds of similarly sized aircraft involved in deployment of chemtrails – the “exotic weapon” that UN/IPCC scientists agree is warming the climate.

The scale of Keith’s proposal to deploy 20,000 tons serves to demonstrate that the covert chemtrails operation is many times larger and uses hundreds of full-size jets capable of releasing 10 ton payloads at 37,000 feet in the troposphere every hour of every day since the mid, 1990’s.

This closer look at the metrics reveals chemtrails are neither SRM or SAG and challenges the definition of chemtrails as equivalent to geoengineering to allegedly cool the planet. Again, the case is further made when the UN/IPCC workgroup agrees with Cliff Carnicom’s conclusion that persistent contrails and resultant artificial cirrus clouds tend to warm the climate.

Finally, who would be so gullible as to presume Keith’s SAG plan to spray sulfuric acid would replace chemtrails – a covert operation that never pretended to be a benevolent program to mitigate global warming?

The future could see two opposing aerosol operations: (1) Covert chemtrails that warms the climate and (2) Sulphuric acid as SAG/SRM to offset warming due chemtrails.

The IPCC and geoengineers, Ken Caldeira and David Keith could feel somewhat justified in denying chemtrails because they know it’s not competing as an operation intended to mitigate global warming. Basically, they are saying that Chemtrails – the covert exotic weapons program – is none of their business due to national security issues.

It makes little difference to geoengineers if the climate is warming due to CO2 or chemtrails – It will add to Keith’s business interests to offer SRM no matter the collective cause for warming.

We might suspect that the UN/IPCC was hoping to run out the clock in order to allow passag of hard-core climate change legislation by ignoring how chemtrails warm the climate as long as it helps to make the case for policy makers.

But in view of the skyrocketing public awareness of warming by chemtrails and destructive weather modification schemes, the IPCC is more and more regarded as a consensus of climate liars.

To complicate matters more, new research says reducing the amount of sunlight reaching the planet’s surface by geoengineering may not undo climate change after all. Two German researchers used a simple energy balance analysis to explain how the Earth’s water cycle responds differently to heating by sunlight than it does to warming due to a stronger atmospheric greenhouse effect. Further, they show that this difference implies that reflecting sunlight to reduce temperatures may have unwanted effects on the Earth’s rainfall patterns. The results are now published in Earth System Dynamics, an open access journal of the European Geosciences Union (EGU). (source)