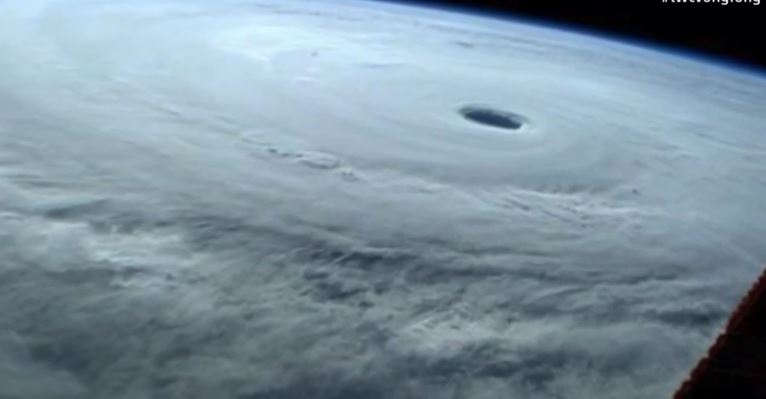 Typhoon Vongfong, which has weakened enough to lose the “super” in its name, is battering the Japanese island of Okinawa, which is home to thousands of U.S. military personnel. After making a direct hit on the island, the storm is expected to lash the rest of the Ryukyu Islands before reaching the Japanese mainland, where it will bring strong winds, high seas, and potentially deadly flooding rains.

As expected, the storm has lost much of its strength since it became the strongest tropical cyclone anywhere on Earth since 2013’s Haiyan, which devastated parts of the Philippines.

SEE ALSO: The Most Powerful Storm on Earth This Year Is Heading for Japan

As of 4 p.m. ET, the storm had maximum sustained winds of 130 miles per hour, making it a low-end Category 4 storm on the Saffir-Simpson Scale, which measures wind speed and estimates potential damage.

At Kadena Air Base in Okinawa, winds have been blowing at tropical storm force (at or greater than 39 miles per hour) for about 16 straight hours, and they are likely to intensify to well above 74 miles per hour, once the storm makes its closest pass to the base. This should happen on Saturday night, local time. Kadena is experiencing such strong winds even though the eye of the storm was, at the time of this writing, about 200 miles southeast of the base.

According to The Weather Channel, the base has seen a wind gust above 90 miles per hour already. If sustained winds reach 100 miles per hour or more, the network reported, it would be the highest winds recorded there due to a tropical cyclone since 2009. (Tropical cyclone is a general term that includes cyclones, typhoons and hurricanes. They are referred to differently depending on where on Earth they occur.)

This is the second straight weekend to feature a typhoon in Japan. Last weekend, Typhoon Phanfone struck the country, dumping anywhere from six to 20 inches of rain, and bringing 70 mile per hour winds to Tokyo. Tokyo had more than 10 inches of rain from that storm.

Because of the previous storm, as well as other typhoons this season that have inundated areas of southwest Japan in particular, Typhoon Vongfong could cause significant flooding as well as mudslides due to its heavy rains.

The storm should be a weak tropical storm, or hybrid storm with some non-tropical characteristics, by the time it reaches Tokyo on early Tuesday local time.