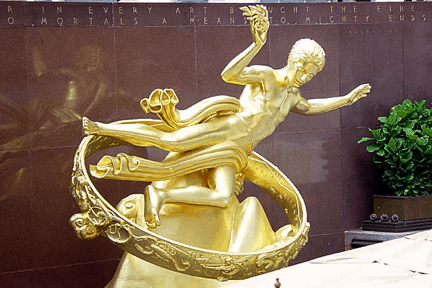 In the 20th century, the vast wealth of the Rockefeller family was put to use building the monolithic Rockefeller Center, the United Nations and the World Trade Center in New York City.    Each building complex is suffused with occult symbolism and meaning.  When one analyzes the artwork associated with these structures, their design and purpose are clearly Luciferian.

In the Sunken Plaza of the Rockefeller Center is a golden statue of Prometheus, a Titan of Greek mythology.  He betrayed Zeus, the Father of the Gods, by stealing fire and giving it to mankind.  Behind the gilded statue, etched in granite, are the following words:

The statue is circled by the insignia of the astrotheological occult—a visual depiction of the twelve signs of the zodiac.

Master occultist and founder of Theosophical Society Helena Petrovna Blavatsky wrote of Prometheus in her magnum opus The Secret Doctrine:

Here she refers to the fallen Titan as one who transforms man into a God:

Blavatsky also promoted in The Secret Doctrine (Hitler’s favorite book) the lie that Prometheus, the symbolic representation of the devil, is not an adversary to mankind, but a benefactor: 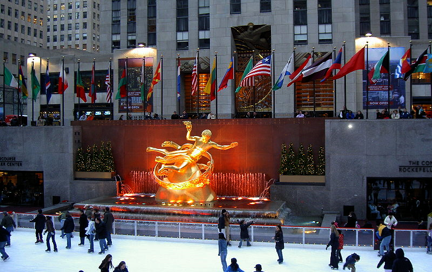 Revelers and tourists have congregated, even ice skated, before this symbol of the devil for decades.  Additionally, above the statue rests a visual representation of all High Masons and occultists fervent dreams—the national flags of all the worlds countries formulated into a New World Order, under the rule of the Fallen One.   David Rockefeller himself said: 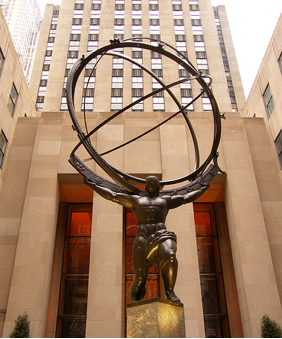 In another location in the Rockefeller Center resides the statue of Atlas, another of the Titans from Greek mythology.  The bronzed figure has his arms wide, holding up the vault of heaven.  Atlas has been forced to carry the celestial world on his shoulders because he rebelled against Zeus, father of the Gods and Man.  Again, this allegorical representation of Lucifer is surrounded by the twelve signs of the zodiac.  In classical European architectural tradition an atlas is a temple support sculpted in the form of a man, which may take the place of a column, a pier or a pilaster. 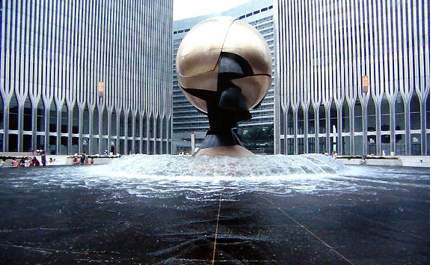 Built on high-priced land in lower Manhattan, the World Trade Center (WTC) contained a statue central to the purpose of the building.   The Great Spherical Caryatid rested between the two 110 story pillars of the WTC, built to promote the breakdown of national sovereignty through supranational economic agreements.  The sculpture is not a caryatid in a plain sense—a caryatid is a sculpted female figure serving as an architectural support taking the place of a column or a pillar supporting an entablature on her head.  The use of the descriptive term caryatid promotes the understanding that the WTC is no mere building, but a temple complex.  Moreover, bronze is a metal alloy consisting primarily of copper, usually with tin as the main additive.  The use of this metal suggests the bonding together of opposites, or different substances—the stated purpose of the building was to bind together nations under supranational economic agreements.

David Rockefeller has committed his life to the propagation and installment of supranational economic agreements.  Of NAFTA (North American Free Trade Agreement), implemented in 1994, he said: 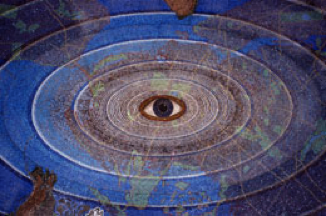 An artwork entitled Oculus (Eye) was placed in the Chambers Street/World Trade Center station complex under the WTC.  The centerpiece of the work is an elliptical glass and stone mosaic floor, with a mosaic eye at the center of an ultramarine vortex with the image of the City of New York woven into the picture.

One meaning of the word occult means to eclipse, as when the moon obscures the sun during a total eclipse.  Oc is also the root of the Latin word for eye – oculus.  Oculus and occult share the same root word in Latin.  In the occult, the single eye also refers to the Eye of Horus, a representation of Lucifer. 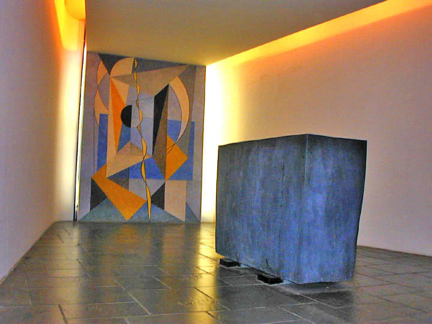 There are 72 geometrical figures (and shadings) in the mural.  The number 72 is a very important number in the occult.  The Lesser Key of Solomon, or the Goetia (meaning howling) concerns the conjuration of the seventy-two evil spirits as defined by King Solomon, son of David:

There are other symbolic representations to Luciferianism:

In sum, the defining purpose of each building was to lay a foundation for the construction of a Luciferian global political structure.  These three building complexes, financed and implemented by the Rockefeller family, were created not as mere modern towers, but also designed and decorated as modern temples, symbolically dedicated to the Luciferian doctrine of a New World Order.

Writer and Director of the new film:  Prophet of Evil: Aleister Crowley www.occult911.com