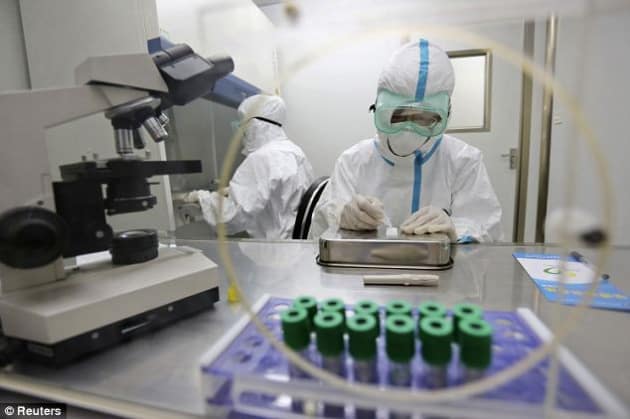 Posted on August 20, 2014by The Extinction Protocol

August 2014 – SAUDI ARABIA – Two men, displaying suspected symptoms of the Ebola virus, ran away from a rural health center located in the Madinah province of Saudi Arabia on Sunday, a Saudi daily reported. “The two African nationals, who did not have residency permits or any other documentation, came to see the doctor at the health center, complaining of difficulty breathing and bleeding while passing urine,” an official who requested anonymity told Arab News. Medical officials were unable to conduct a thorough examination and confirm that the patients were infected with the Ebola virus as they ran away after being asked to produce their residency permits. The doctor present had instructed the center to take the patients to a hospital with better facilities before the duo took off. The matter was reported to police instantly, the source said.

The police are still searching for the patients, the report added. The Health Affairs Directorate in Madinah said the patients were from East Africa, a region not affected by Ebola, although their precise nationality had not been identified. The deadly Ebola virus, declared a public health emergency by the World Health Organization (WHO), has killed over 1,140 people in West Africa and is spreading rampantly. Saudi Arabia has been taking several measures to prevent the entry of the virus into the country, and earlier this year declared that haj and umrah pilgrimage visas will not be granted to people from Ebola-hit countries. Earlier this month, a Saudi businessman who returned from a business trip to Sierra Leone showed symptoms of the virus and later died in a hospital in Jeddah. However, test results later confirmed that he had not been infected with Ebola. –Gulf Business

Nigeria reports 5th Ebola death: A senior doctor who treated Nigeria’s first Ebola patient has died, taking the death toll in Africa’s most populous country to five, Health Minister Onyebuchi Chukwu said on Tuesday. Chukwu said the doctor was “the most senior who participated in the management of the (first Ebola) patient” in the country. Liberian-American Patrick Sawyer, 40, died in a Lagos hospital on July 25, five days after arriving at the city’s airport visibly unwell on a flight from the Liberian capital, Monrovia. “With this unfortunate development, the total number of Ebola virus-related deaths in Nigeria now stands at five,” Chukwu added. –Yahoo News

There is much about the Ebola virus that we don’t know. Ebola is a virulent level-4 pathogen with a near 90% mortality rate. The virus didn’t acquire its pernicious ranking by being predictable. It’s an insidious, mysterious killer that is subject to further evolutionary development or mutations just like any other virus that replicates. I warned in my radio address that the virus may also have latent triggers that could trick the infected patient into thinking they have recovered when, in fact, he or she may be just a stumble or two away from death, and is only further aiding in the transmission of the virus. We may be in for more nasty surprises from the Ebola virus.  –Alvin Conway