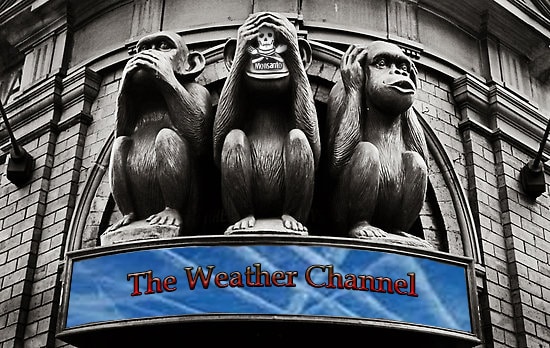 Secret Face of the Weather Channel

But why all the secrecy on the one hand? While at the same time injecting mind conditioning images into television commercials geared to subvert public opinion through a sort of subliminal acquiescence, silently painting this arrogant science of GeoEngineering as an acceptable activity.

I was watching a few minutes of idiocy on television the other evening, when my eyes happened to catch such a three-second subliminal injection, portraying a GeoEngineered aerosol spray trail in the background of a car commercial. I was absolutely stunned with disbelief! I rolled the program back, froze the image and snapped it with my camera. This blatant example of the public’s psyche being unscrupulously massaged should set off alarm bells in everyone’s cognizant senses. It demonstrates precisely the arrogancy of military science and desire to “Own the Weather.” Without any consideration for any consequential side effects such renegade ‘science’ might pour down upon the rest of Earth’s dwellers.

What sort of pathology drives such reckless individuals to strive for such heights? Where is the FCC and why, as a ‘Public Servant’, isn’t it informing the population of the deadly toxins being dumped on them? Why the stealthy knife in the back approach such as this?

As an agent of Chemical Giant, Monsanto, would not this make the Weather Channel complicit in crimes against humanity and ecocide against the planet, especially since this global spraying campaign is dumping billions of tonnes of toxins into our lungs and environment?

Even NASA is involved in the mind conditioning process. The following cloud chart from NASA is being used in public schools to teach your children that artificial chemical clouds (chemtrails) are safe and natural:

MORE ON THIS STORY:

Nick Begich : Technology to Control the Weather
Climate Engineering Weather Warfare, and the Collapse of Civilization
Weather as a Force Multiplier HAARP: Owning the Weather by 2025
U.S. Congress Endorses Term “Chemtrail” Categorizing it as Exotic Weapon