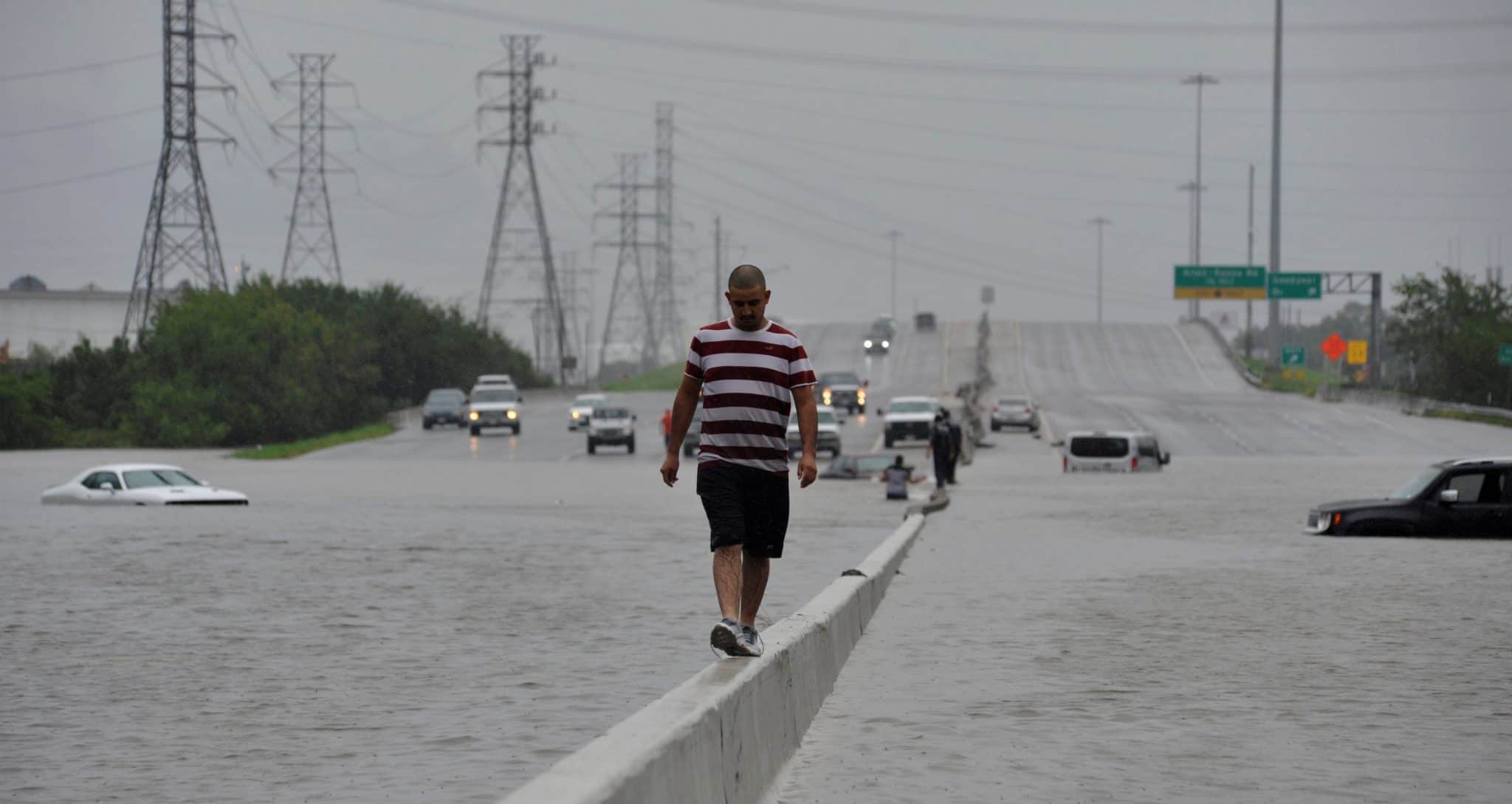 “To put the rainfall total in perspective, Seattle averages 37 inches
of rain a year, Atlanta gets about 50 inches a year, and Miami, Fla.,
receives about 62 inches a year, according to Weather.com.”

Hurricane Harvey has now evolved into a 1000 year flood for large areas of East Texas.

Even today this superstorm has already attained a catastrophe status of truly epic proportions…and it still has days of rain-dumping predicted.

Truly, this calamity will prove to be the worst manmade weather event in Texas history.

The common folk all over Texas are even referring to Hurricane Harvey as a once-in-a-millennium biblical event—H A R V E Y G E D D O N !

How does such a disastrous deluge come out of nowhere and catch so many completely unaware?

This simple fact — when a superstorm seemingly comes out of nowhere — it’s often the sure sign of a geoengineered weather system.  For those who doubt that this catastrophe was manufactured, please view the following video.

The group of geoengineering researchers who have conducted an exhaustive investigation of this matter have put together an excellent and compelling video analysis as follows: 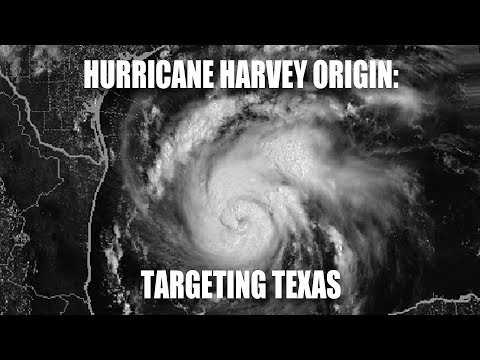 With this critical understanding, the reader can more easily apprehend the true purposes behind Hurricane Harvey as delineated at this link: 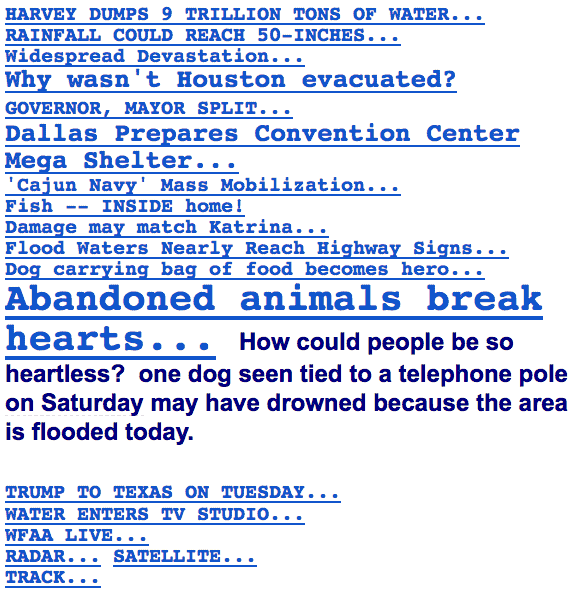 As far as the extensive and profound destruction of this devastating rain event, these headlines from the Drudge Report capture just a small piece of this unfolding geoengineered tragedy.

[…] The population density of East Texas is very high compared to the rest of the state, which is the second most populous state in the country (see graphic below).  Hence, it is not just Houston and Corpus Christi that have major problems; it’s the whole region, especially the outlying and many low-lying residential areas.

The biggest concern is that this superstorm is a HUGE rainmaker which has essentially parked itself over the East Texas lowlands.  The grim reality is that Houston, like New Orleans, shouldn’t even be there, its elevation is so low in many places.

There’s no question that Hurricane Harvey was geoengineered by the usual perps specifically to morph into President Trump’s Katrina.

Like all conspiratorial plots concocted by Deep State, this one will quickly unwind as swiftly as the floodwaters recede.  Until then, the perpetrators will do everything in their power to take advantage of the chaos they engineered in Houston, in Corpus Christi, in the capital Austin, and elsewhere throughout southeast Texas.

There is much more going on with this manmade deluge than meets the eye.  Some of the deeper intentions are impossible to tease out at this early stage of the rapidly evolving crisis.  Nevertheless, the Alt Media is watching every phase of this deliberate weather event very closely.  Their fingerprints (e.g. geoengineers, FEMA operatives, agents of Deep State) are unavoidably left all over the crime scene, as usual.

As for the many seemingly disparate goals of the NWO globalist cabal which directed this weather drama, the following exposé breaks it all down.

Another KATRINA: Distraction, Diversion and Misdirection

[…] The whole nation is now transfixed by this ongoing disaster.  The power elite always creates these extreme predicaments to change the conversation.

When half the USA wants international criminal George Soros arrested yesterday, imprisoned today, and hung for treason tomorrow, TPTB know that they have serious problems.

Soros Must Be Arrested, Prosecuted and Imprisoned to Prevent Civil War

Much more serious, in fact, than Houston’s. This is why the elites engage in misdirection at every turn of events; for they are facing very real existential threats.  […]

The Hidden Agenda Behind Weather Warfare and Environmental Terrorism

It should come as no surprise that such blatant acts of weather warfare and environmental terrorism have multiple goals for the NWO cabal.  In the case of HARVEYGEDDON there are so many globalist objectives being accomplished at once it boggles the mind.  For example:

Nothing irks the globalists more than the prospect of a gold-backed currency, especially one that could be used by a newly declared sovereign “nation-state”.   Again, the SOD hangs precariously over Austin to cease and desist such defiance via an all-out weather war.

Weather warfare on this scale has simply never been seen before on the U.S. mainland; nor has such overwhelming environmental terrorism.

There are several other reasons for the now infamous HARVEYGEDDON which are way beyond the scope of this article.  However each of those is vital to fully comprehend the depth and breadth of this incomparable psyop perpetrated by the Illuminati.  Weather warfare on this scale has simply never been seen before on the U.S. mainland; nor has such overwhelming environmental terrorism.  Hence, those other globalist purposes will be discussed in a future exposé.

Letters have been written and sent directly to President Trump and his key staff regarding the dire consequences of geoengineering (see links below).  These requests to stop the chemtrails have not been addressed or even acknowledged.

Here’s another missive sent to the Prez:

President Trump, Please Shut Down The Chemtrails…
…Before It’s Too Late!

Quite unfortunately for the residents of Texas, our warnings were not heeded.

Perhaps there needed to be a geoengineering crime so deadly and destructive that the people themselves would rise up and demand — ONCE AND FOR ALL — a stop to the:

Flying home from Southern California Saturday I got some pics of this unparalleled, man-engineered storm as the pilot routed us around the north edge of it.