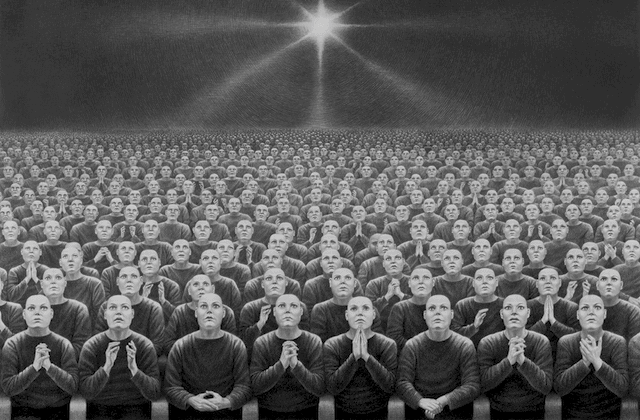 From my work-in-progress, The Magician Awakes, here is a relevant quote:

“The truth is, we are talking about theater. You can take on a role, you can ‘become’ someone else, just as an actor slips into character in a play. But you can also put aside that role. There is nothing final about it.

“On a political level, the idea that we are all one unity is just another corrupt piece of propaganda, intentionally promoted to convince people that their individual independence is a delusion.

“And on a personal level, many, many people are all too eager to lay down their own power, to stop exploring what that power is really capable of, to short-circuit that power and instead join up with an Image of ‘all consciousness.’”

“Every one belongs to every one else” is a quote from Huxley’s novel, Brave New World. Is this slogan a genuine humanitarian effort on the part of the State, or a weapon directed at the individual?

The answer in the novel is given by the characterof the “Director”:

The State is the shaper, the groomer, the proponent of all-encompassing mind control.

There are millions of people who resemble the naïve citizens of Brave New World, who accept the above communitarian sentiments as genuine and true and even messianic.

The State (and its media fronts), in our time, wants to impart a “spiritual tone” to its pronouncements. This comes in two basic forms. One, we are holy crusaders who must drop bombs on those who refuse to accept our traditional religion (Bush). And two, we are a single unified consciousness who must diminish the notion of the independent individual (Obama).

Coming from the State and its minions, these are straight cons.

They carry the moral weight of a mafia rep who promises a grocery-store owner protection for a weekly cut of his income.

A common theme runs through Orwell’s 1984, Huxley’s Brave New World, and Anthony Burgess’ A Clockwork Orange: there is an overwhelming problem that must be solved for the benefit of all humanity.

The problem could be described as poverty or suffering or irrational resistance to leadership or crime. The solution, though, always produces something far worse than the problem.

Mind control is directed at the mass, the group, the collective, the community, the population.

Integrating people with people. In other words, to make mind control propaganda work, people must cease thinking of themselves as independent individuals. That’s the key. They must think of themselves, first and foremost, as part of a group. Then the propaganda works beautifully.

Therefore, the first order of business, for propaganda, is launching suggestion after suggestion that “we’re all together.”

This “meta-suggestion” must appear to be made with the greatest sincerity and concern for the general good.

Mustapha Mond, the World Controller of Western Europe in Brave New World, comments: “Sleep teaching was actually prohibited in England…Parliament, if you know what that was, passed a law against it. The records survive. Speeches about liberty of the subject [individual person]. [Which was really] Liberty to be inefficient and miserable. Freedom to be a round peg in a square hole.”

In the novel, sleep teaching was a series of vocal repetitions, thousands of them, which added up to the insertion of State-sponsored thought in the mind of the sleeper.

Mustapha Mond is reflecting on the old world. He’s linking the ancient concept of freedom to inevitable consequences of inefficiency, suffering, and isolation. And of course the State solves all these conditions by reshaping the minds of the people, engineering them in the womb, treating them with a drug, called Soma, which relieves and banishes unhappiness, and teaching (hypnotizing) them in their sleep.

“Every one works for every one else. We can’t do without any one…for I am you and you are I.” These are the sentiments of the Brave New World. These are the thoughts produced by sleep teaching. These are the utopian principles. This is mind control.

These principles cut far deeper than, say, worker-owned businesses or intentional communities. They seek to eliminate the individual’s consciousness that he is an independent individual. In fact, they seek to cause confusion whenever an individual does consider the possibility that he is independent.

Another character in Brave new World, Bernard Marx, expresses this confusion: “How is it that I can’t, or rather—because I know quite well why I can’t—what would it be like if I could, if I were free—not enslaved by my conditioning.”

He can’t conceive what his own freedom would be.

Mond, the Controller, describes the essence of Brave New World. Ask yourself how many people would opt for this kind of life, if they could have it now:

“…you’re so conditioned that you can’t help doing what you ought to do. And what you ought to do is on the whole so pleasant, so many of the natural impulses are allowed free play, that there really aren’t any temptations to resist. And if ever, by some unlucky chance, anything unpleasant should somehow happen, why, there’s always soma to give you a holiday from the facts. And there’s always soma to calm your anger, to reconcile you to your enemies, to make you patient and long-suffering. In the past you could only accomplish these things by making a great effort and after years of hard moral training. Now, you swallow two or three half-gramme tablets, and there you are. Anybody can be virtuous now. You can carry at least half your morality about in a bottle…”

And how about this feature of the New World? “Men and women must have their adrenals stimulated from time to time…It’s one of the conditions of perfect health. That’s why we’ve made the V.P.S. treatments compulsory…Violent Passion Surrogate. Regularly once a month. We flood the whole system with adrenalin. It’s the complete physiological equivalent of fear and rage. All the tonic effects of murdering Desdemona and being murdered by Othello, without any of the inconveniences.” (Video games, anyone?)

Every day, week, month, year, more people are coming around to a preference for a synthetic mind-controlled “utopia,” even if they don’t realize it. They would take the Brave New World existence if it were offered to them.

And if the price to pay was the acceptance of conditioning? “Everyone belongs to everyone else”? Oh well, why not?

It’s highly significant that, in Brave New World, even with every fetus subjected to genetic engineering, there was still a need to condition people, through repetitive sleep learning, to accept The Group as all and everything.

That’s how deep the idea of the independent individual goes.

That’s The Problem for the controllers. And no matter what they try, they will never solve it with finality.

Everyone doesn’t belong to everyone else. The individual is irreducible.